After a trip through Vienna Bond and Kara arrive at Hotel im Palais Schwarzenberg in their horse carriage. Bond is a regular at the hotel and is greeted by Hans, the hotel manager, in the reception. Bond's hotel is located in a high-end residential part of town, surrounded by embassies and more notably, the famous Belvedere complex.

The Schwarzenberg Palace is located right next to the Belvedere garden and the Belvedere Palace, which is probably one of the most famous palaces in Vienna. Schwarzenberg however is not as publicly known, probably due to the fact that it is still privately owned and closed for the public. All the same, this is what makes it even more interesting as a Bond location. You are not bothered by tourists and very few people have visited the palace.

The interior of the hotel was filmed on location at the real palace with the reception housed in the main hall, called the marble gallery. Whether this actually was a hotel in 1987 is a little unclear, information about the hotel and when it existed have been hard to find. But given the state of the interior, it is not likely that any activity will commence anytime soon. The interior is still very recognizable however with the chandelier, briefly seen in the film, still in place. If anyone has information about when the hotel existed, feel free to contact me. 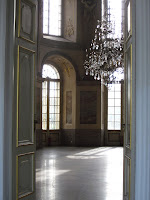 Bond is greeted by Hans in the reception who immediately wants to prepare Bond's usual suite. Bond, a gentleman however wants a second bedroom for Kara. Something that he could have managed without considering the development during that same evening. It is also here, in a shop opposite the hotel reception, that Kara finds the dress she wears to the opera later. Bond wants to buy it and send the bill to Georgi. How he managed that is a bit unclear...

"-Good afternoon Mr Bond, you will need your usual suite?
-Not tonight Hans, something with a second bedroom!"
-Hans and Bond-

The fireplace can briefly be seen behind Hans in the reception and can still be found in the marble gallery in the palace.

"-Shall I have vodka martini sent up?
-Shaken, not stirred!
-Of cooourse..."
-Hans to Bond- 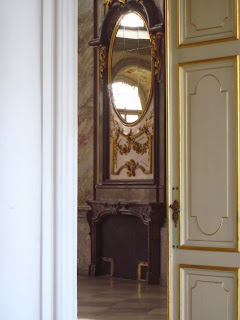 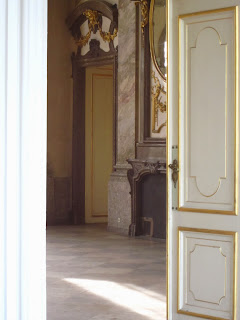 The baroque palace was constructedby architects Lukas von Hildebrandt and Bernhard Fischer von Erlach between 1697 and 1728. It is still owned by the Schwarzenberg family, which is a princely family that dates all the way back to the 12th century. Today, Palais Schwarzenberg is one of the last family owned palais left in Vienna. With a private enclosed park and 44 rooms this is a truly unique palace still in private hands. 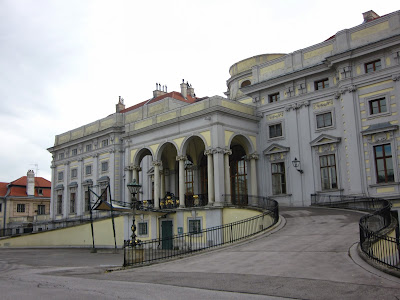 Unfortunately the park is closed and not accessible for the public. According to the information we received during our visit, the owner is trying to open a hotel and the building have been "under renovation" for at least 10 years. One can only hope that they will receive the necessary permits and funding and finally convert this beautiful and classic Bond location to a real hotel! In the meantime, the surroundings with the parking lot really ruins this otherwise magnificent location. 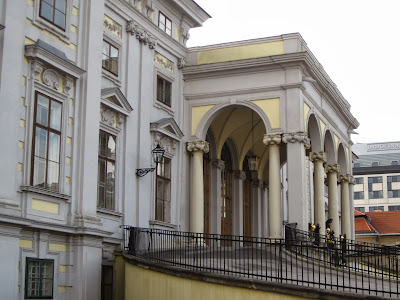 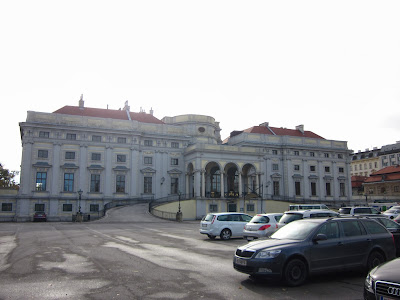 With this 101st post I will reach 100 000 pageviews since my blog inauguration! Hopefully it will take less than 2 years to reach another 100 000.
In Quantum of Solace, the CIA is meeting with Dominic Greene in Haiti to make a deal with the Quantum organisation. The section chief, Gregory Beam together with Felix Leiter are discussing the deal during a flight from the Aerogare in Haiti to Bregenz in Austria. The CIA have chartered a plane from the private jet company Ocean Sky. Greene is assured that the CIA will do nothing to stop General Medrano's coup in Bolivia and in exchange they get the lease to any oil found in the country.

On board the jet is a small fridge visible, containing Heineken beer and Bollinger Grande Année champagne. A Sony TV is also visible, all brands are part of the sponsorship deals for the film. The tail number is G-OCSC and the plane in full Ocean Sky livery is a Bombardier Challenger 604.

Ocean Sky was formed in 2003, originally as an aviation broker, but the company changed their business model to a private jet company in 2005. At this time they bought a fleet of new aircraft but also managed privately owned jets on behalf of other owners. In 2012 Ocean Sky were the subject of insolvency proceedings and on 3 September that year, their operating licence was suspended by the Civil Aviation Authority. Today Ocean Sky is a group that consists of a number of UK and international limited companies with offices in London, Geneva, Moscow and New York involved in e.g. agriculture, aviation and real estate. Weather they still have a private jet service is unclear, but it is not likely that they have their own fleet of aircraft anymore.

The product placement by Ocean Sky was one of the bigger sponsorship deals in the film. The company lent five of its business jets to the film production. The planes, valued at £100 million each and with the standard rate of £5000 per hour, were used to fly the cast and crew to Panama. How much the product placement did amount to is unknown however.

After attending Puccini's Tosca at the Bregenz opera, Greene leaves on another private plane, this time a Gulfstream. Since Ocean Sky did not have a Gulfstream in its fleet, this is evidently another jet company or Greene's own jet. Bond is trying to follow Greene by chartering a jet from Ocean Sky, but M has cancelled his card so it is denied at the Ocean Sky desk. Instead Bond goes to see Mathis in Italy. How Bond could travel to Italy, buy a Tom Ford cardigan for a few thousand dollars and charter a boat to Talamone without a single credit card is beyond me. But then again, the plot in Quantum of Solace has more holes than the Titanic so it is probably better not to go down that road...

In return for providing the planes, the Ocean Sky jets featured prominently in the film, including an Ocean Sky service desk at Bregenz airport. The logotype has several minutes of screen time.
Upplagd av R. Sterling kl. 01:32 1 comment:

Into Vienna - By the Praterstern

After escaping the Czechoslovakian border guards, in Kara's Cello case, Bond and Kara arrive in Vienna. They have hitched a ride after crossing the border safely into Austria and arrive on the back of a lorry carrying vegetables. Not exactly Bond's finest hour. But his dignity is soon restored when he hails down a horse carriage that takes them through town to Hotel Im Palais Schwarzenberg. 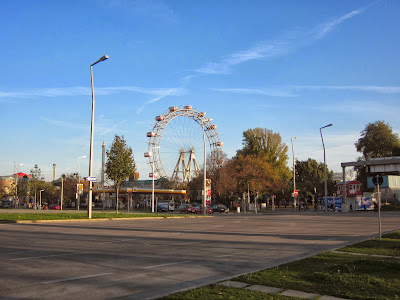 
This is one of the easiest accessible Bond locations in Vienna. The Shell gas station is briefly visible in the film and can still be found on the same location. If you are going to visit the Prater park, you enter from this side. Just cross the road and walk past the gas station to find the entrance. 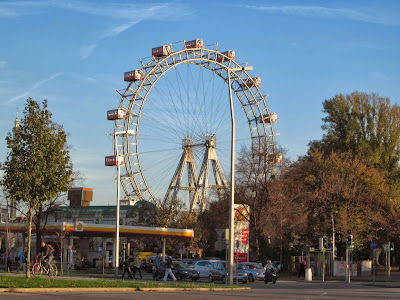 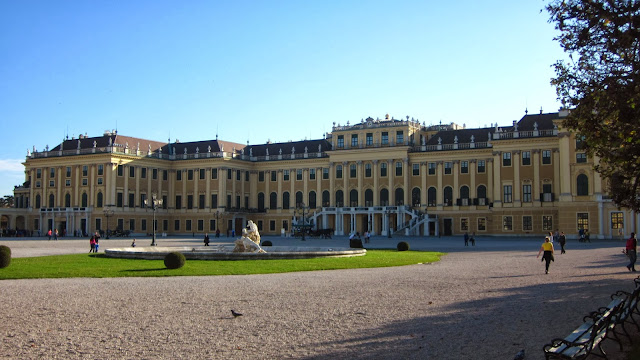 At the end of The Living Daylights 1987, Kara gives a concert at Schönbrunn Palace in Vienna. Both M and General Gogol are among the audience, and Bond supposedly on a mission, has been attending the concert secretly. However, the full exterior of the palace is only seen during the film's end credits. Filmed by of one of the two fountains in the palace courtyard, we see some horse carriages and a few limousines in front of the palace. Bond and Kara have actually been riding past the palace earlier in the film but the garden and backside of the palace will be covered in a later post.

Kara's concert takes place in the Schönbrunn Schlossteater or the Palace theater, located in one of the adjacent buildings to the palace. John Barry who composed the soundtrack for the film, his eleventh and last soundtrack, got a cameo as the philharmonic orchestra conductor in this last scene. John Barry's swan song in the Bond series. 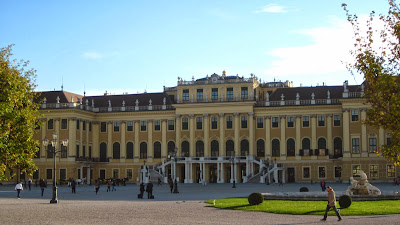 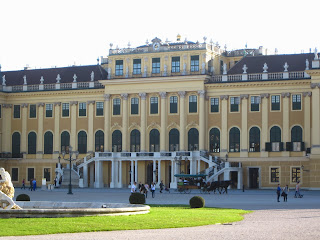 Schönbrunn was originally built as a residence for Empress Eleonora Gonzaga 1638-1643, but was severely damaged in the Second Siege of Vienna in 1683. The Emperor Leopold I had the palace rebuilt as a palatial hunting lodge which was then handed over to his heir, Joseph I. In 1743 the place in its present form was expanded and rebuilt under Empress Maria Theresia and until the end of the first world war it was the summer residence of Austria's Imperial family, the Habsburgs. It was inhabited almost continuously during this period and became a cultural and political center of the Habsburg empire.

During the end credits, three limousines (most likely belonging to M and General Gogol) are parked behind the fountain in front of the palace. The fountains however are switched off during the winter season. The horse carriages also seen in the background in the film can still be found on location in the palace courtyard, ready to take tourists for a ride. 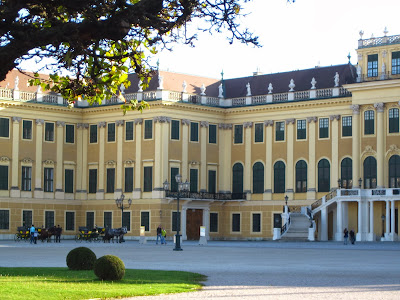 Schloss Schönbrunn is one of the most important cultural monuments in Austria and listed as a UNESCO World Heritage site since 1996. The palace gardens will be covered later, but this is definitely the most beautiful Bond location in Vienna and it is highly recommended to spend the better part of the day here.
Upplagd av R. Sterling kl. 19:42 No comments: