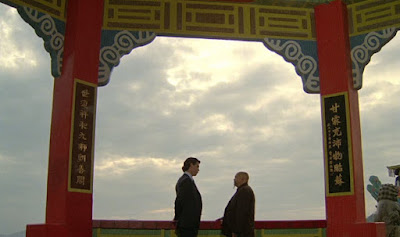 In the brilliant mini series Noble House from 1988, covered earlier on this blog, Pierce Brosnan plays Ian Struan Dunross, the Tai Pan of one of the largest shipping companies in Hong Kong. When the Tai Pan finds himself in financial difficulties, he contacts the opium smuggler Four-finger Wu to ask him for a loan. They meet secretly at what appears to be an old Chinese temple on an island outside of Hong Kong. Four-finger arrives on a boat from his home in Aberdeen. 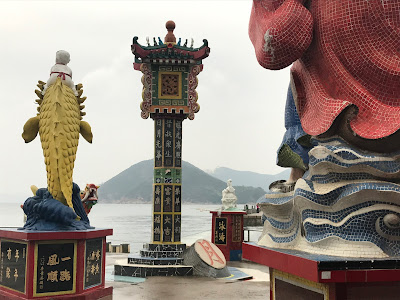 The location however, can be found in Repulse Bay on the south side of Hong Kong Island. The temple is called Tin Hau Temple and even though you get the impression that the temple is located far from the city, you can find it right next to the beach in Repulse Bay. Today, there are condos and a large mall built right behind the temple. 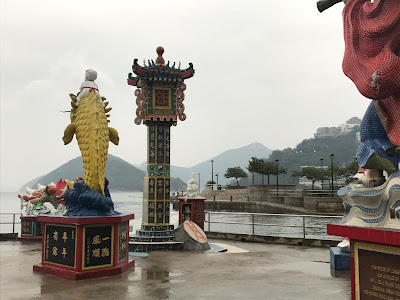 The location however, is still very recognisable today although the fish seen to the left has been painted yellow. During our visit people desperately threw coins into the mouth of the fish, trying to get them to stay there (supposedly for good luck). 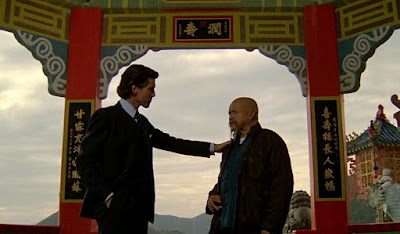 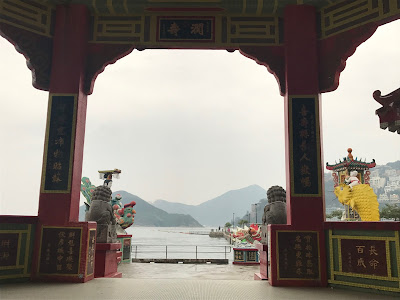 Repulse Bay is just a short bus ride from the Central district. The bay is spectacularly located framed by the mountains overgrown with high end condominiums and town houses. The symbolic for having the Tai Pan meeting Four-finger Wu at this location probably has to do with the history of Repulse Bay being an old pirate refuge, later "repulsed" by the British, hence its name. 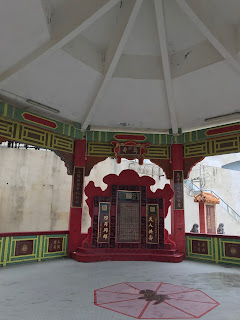 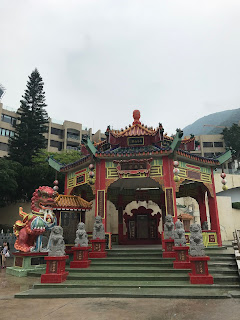 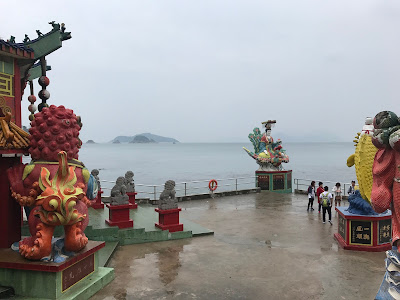 The temple is named after one of Hong Kong's beloved gods, Tin Hau. Tin Hau is the Goddess of the Sea, overseeing and protecting fishermen and a large statue of Tin Hau can be found here. 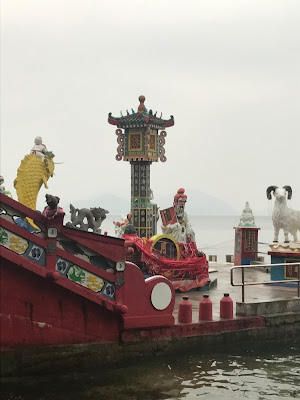 Also seen in the film is an inscription on a stone plate, stating: 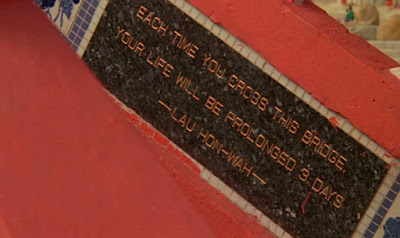 This stone plate is placed on a bridge next to the temple, and can still be found on location today, on the same bridge. This is the Longevity Bridge which you must cross to add three days to your life. 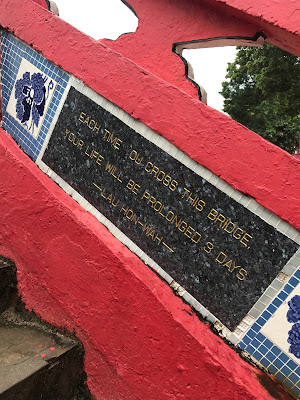 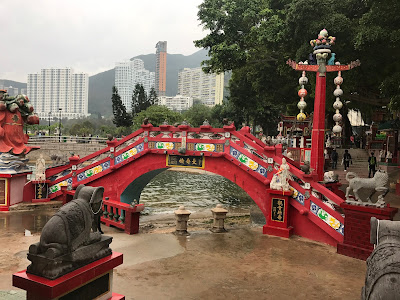 In Moonraker, Bond, in the guise of Roger Moore, walks across St Marc's square on his way to Venini Glass, following a lead from California. A marble lion statue is seen to the right of Bond as he looks at his photos in front of Venini Glass. Venini is located by a small square called Piazzetta dei Leoncini, right next to St Mark's square.

Piazzetta dei Leoncini is located on the north side of the St Mark's Basilica, immediately east of St Mark's square. 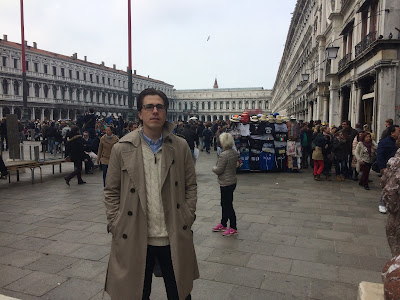 On the morning after, Bond has called in M and the minister of Defense and alerted the local police about of Drax's secret laboratory. The police has sealed off the Piazzetta dei leoncini as Bond arrives with the two superiors. Just like in the film, the Venini Glass shop is located right by the square. 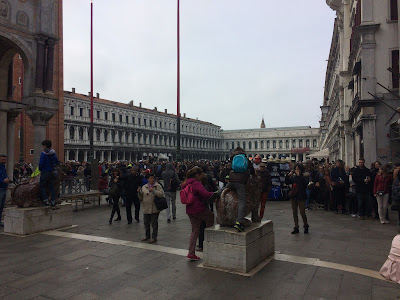 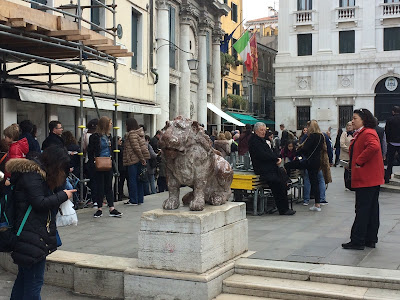 Earlier in the film, Bond drives across St Mark's square for another jolt, this time in his gondola-turned-hovercraft, one of the most stupid scenes in the Bond series.

In Moonraker Bond is breaking into Drax's secret laboratory in Venice. Bond, disguised as a gondolier arrives in his gondola on the Grand Canal. Bond appears to enter a small door which probably is located on the facade of Casa de Uscoli, right next to Palazzetto Pisani. This location is fairly accurate since the following scenes with Bond breaking in and sneaking across the courtyard was filmed on the courtyard of Palazzetto Pisani. 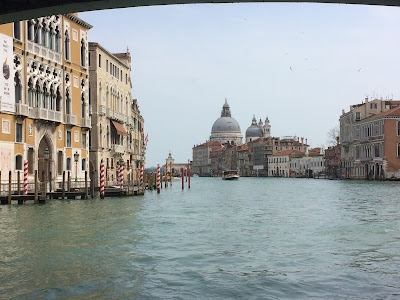 The palazzo where Bond parks his gondola is located in the San Marco district. Seen in the background is the Basilica di Santa Maria della Salute in the most southern Dorsoduro district. 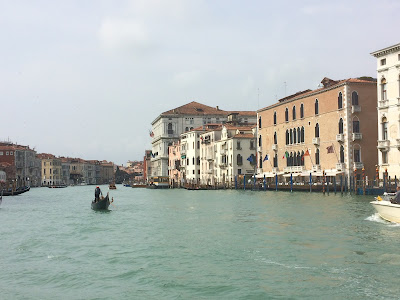 The interior of Drax's laboratory was filmed at Ca' Rezzonico. The same part of the Grand Canal, filmed from the other side right by the basilica, was also seen in one of the last scenes in From Russia With Love.

Bond looking for a party

In The Living Daylights, Bond fakes an assassination of the Soviet general Pushkin during a trade conference in Tangier and escapes over the rooftops. Bond is offered a lift with two girls in the Medina, asking him if he is looking for a party. In order to escape the Moroccan security guards Bond jumps in, not knowing that they actually are CIA agents who are sent out to bring him in for a meeting with Felix Leiter. 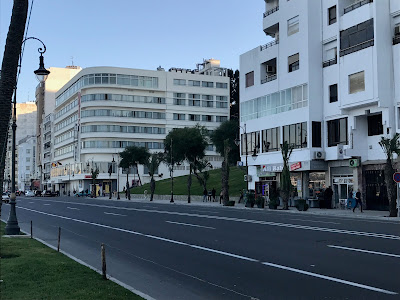 On their way to Leiter, they drive down a wide street in Tangier. This is the large Avenue Mohamed VI which runs alongside the beach in central Tangier. The building that makes this location possible to identify is Hotel Rif, which is seen on the right side of the avenue as Bond and the CIA agents drive past. 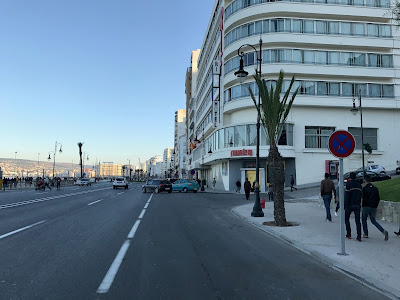 The hotel with its rounded corner is located on number 152 Avenue Mohamed VI. 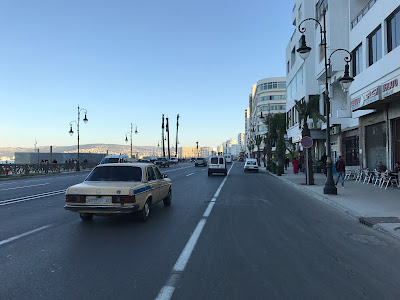 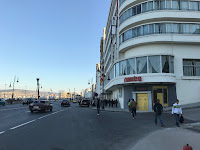 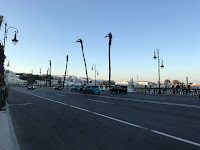 The two CIA agents Ava and Liz, who allegedly are sent out to help Bond escape or just bring him to Leiter, pick up Bond in their Chevrolet Impala in the Medina, which actually is located quite far from the location for the trade conference. The location where they pick up Bond will be covered later.