Thunderball starts off in Paris after the pre-title sequence. The Eiffel Tower is visible from an ordinary street in Paris when Emilio Largo parks his Ford Thunderbird. Largo is attending a meeting at the Spectre headquarters, well disguised behind a regular building close to the Eiffel Tower. When Largo parks in the taxi zone a French police officer shouts "No parking here!" only to apologise immediately when he recognises Monsieur Largo. Largo is well known and evidently feared, even in the police force. 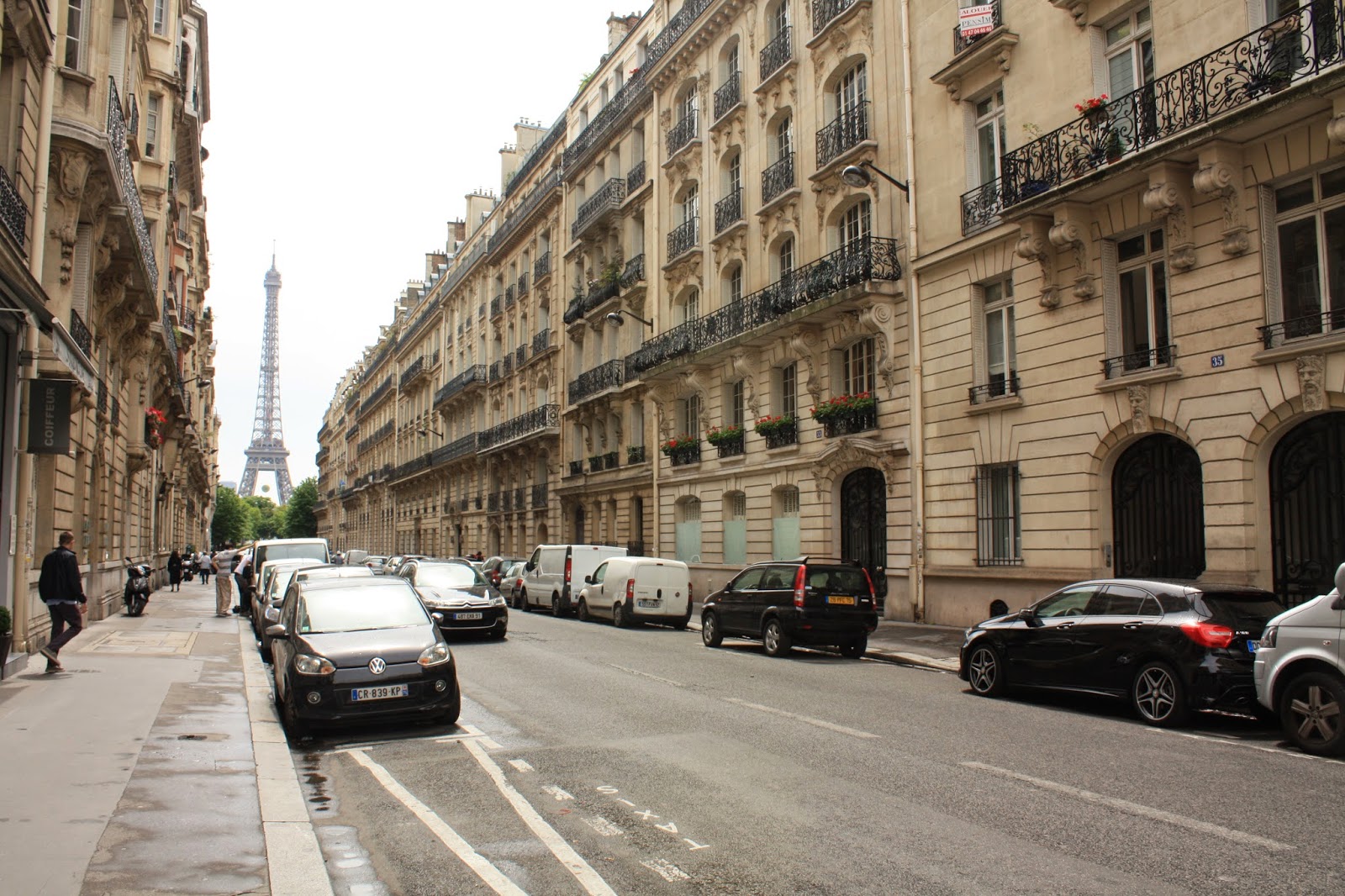 The Spectre headquarters are located at No. 35 Avenue d'Eylau in the fashionable 16th arrondissement of Paris. The street runs just behind Place du Trocadéro and is aligned with the Eiffel Tower, resulting in the "perfect view" over the famous landmark (Largo however seems less than impressed). 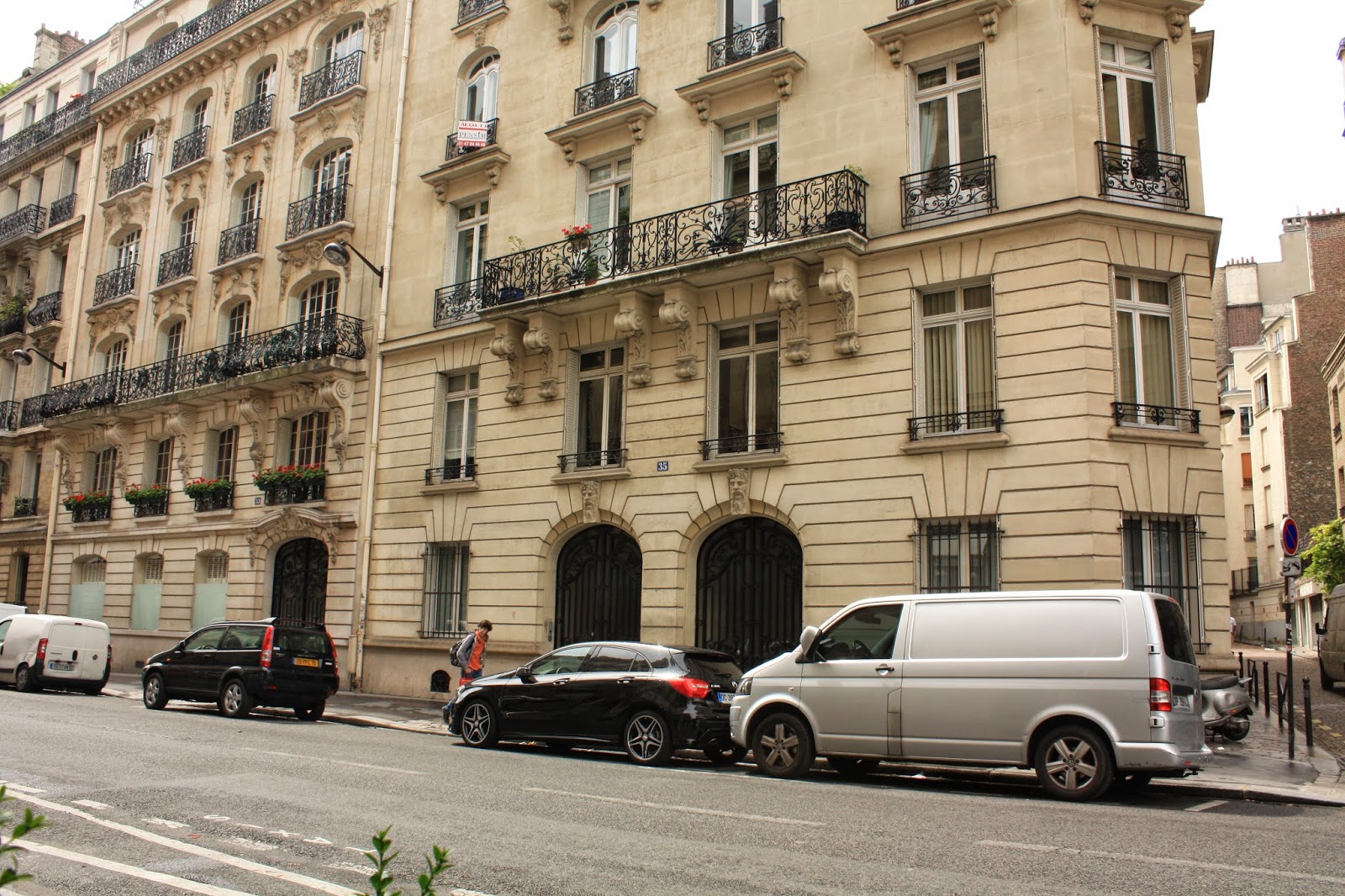 The filmmakers' idea for placing the Spectre headquarters in Paris comes from the original  Thunderball  novel. In the novel, Fleming locates the Spectre headquarters at Boulevard Haussmann in Paris. At the time of my visit, one of the apartments in the building was available for lease. So, if you are thinking about starting an upscale terrorist organisation aiming for world domination, this is the place to rent.

Interesting trivia about the location: the taxi zone where Largo parks in the film is still a taxi zone today, even though the sign has been replaced with a new one, and (for obvious reason) is turned the other way. A very nice restaurant called Di Vino is located on the other side of the street. It is highly recommended to stop here for coffee or a lunch. The terrace extends well into Avenue d'Eylau and from here you have a nice view over this spectacular location. The fact that the street looks much the same as it did in 1965 and that the taxi zone has been kept makes this a very enjoyable Bond location. 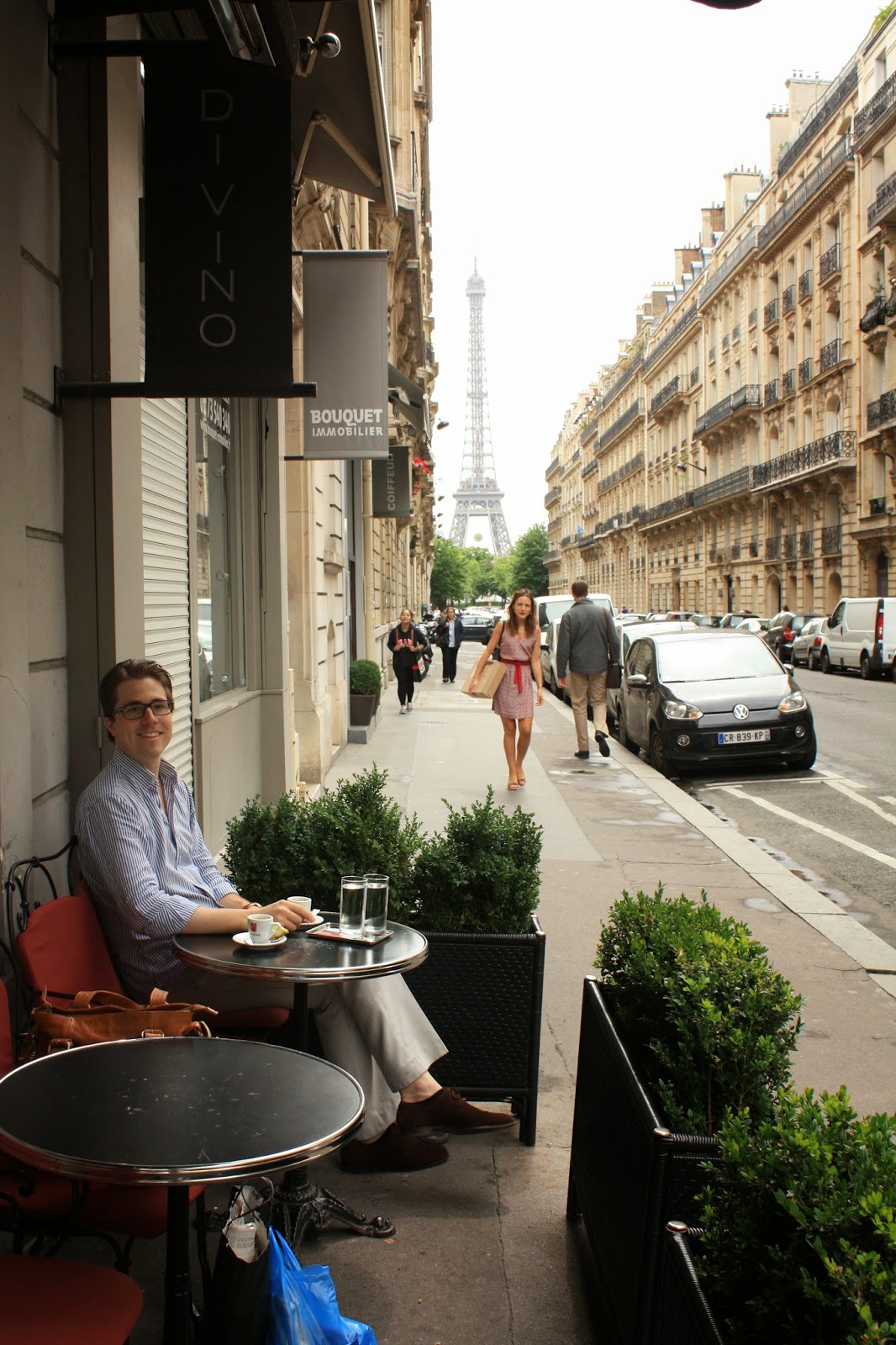 "You always were a cunning linguist James..."

In Tomorrow Never Dies, Bond goes to Oxford for a little Danish lesson. When there is a situation at the Ministry of Defense Bond, in bed with the Danish teacher prof. Inga Bergstrom, is immediately called in by Moneypenny. The establishing shot over Oxford shows 'Brasenose College' on Radcliffe Sq. The language faculty however is located in another building, shown in the next scene.

Bond's Aston Martin is seen parked just outside the main front entrance of 'New College Oxford'. Despite the name, New College is one of the oldest of the Oxford colleges, founded in 1379 by William of Wykeham, Bishop of Winchester. The original name was "The College of St Mary of Winchester in Oxford". 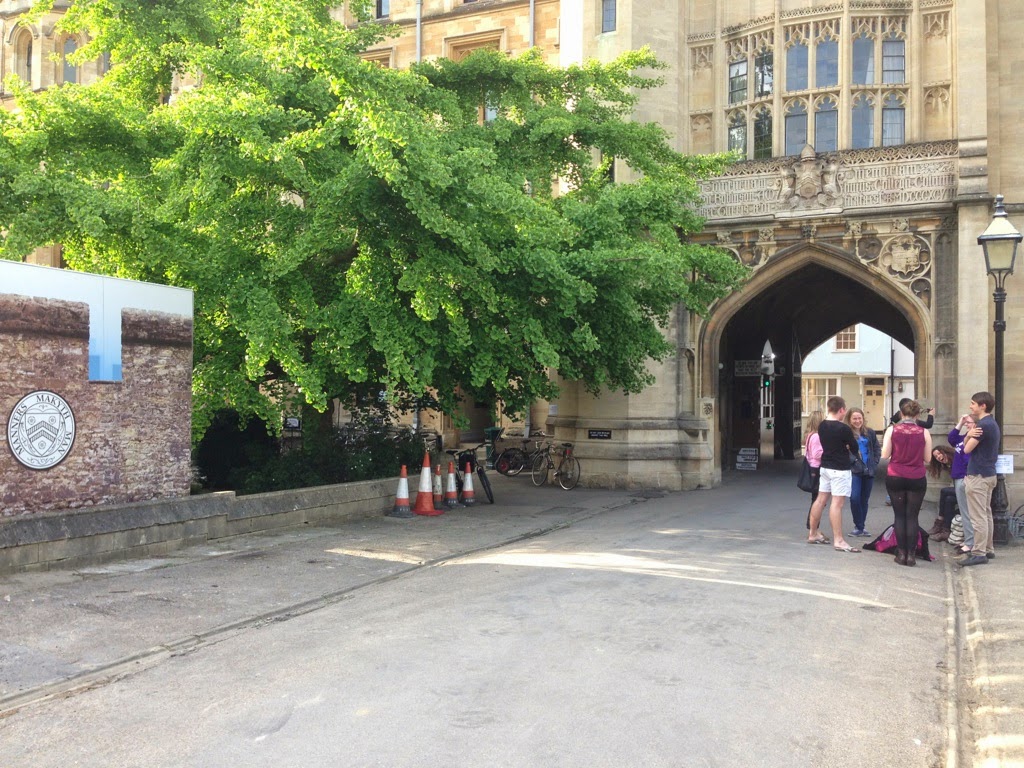 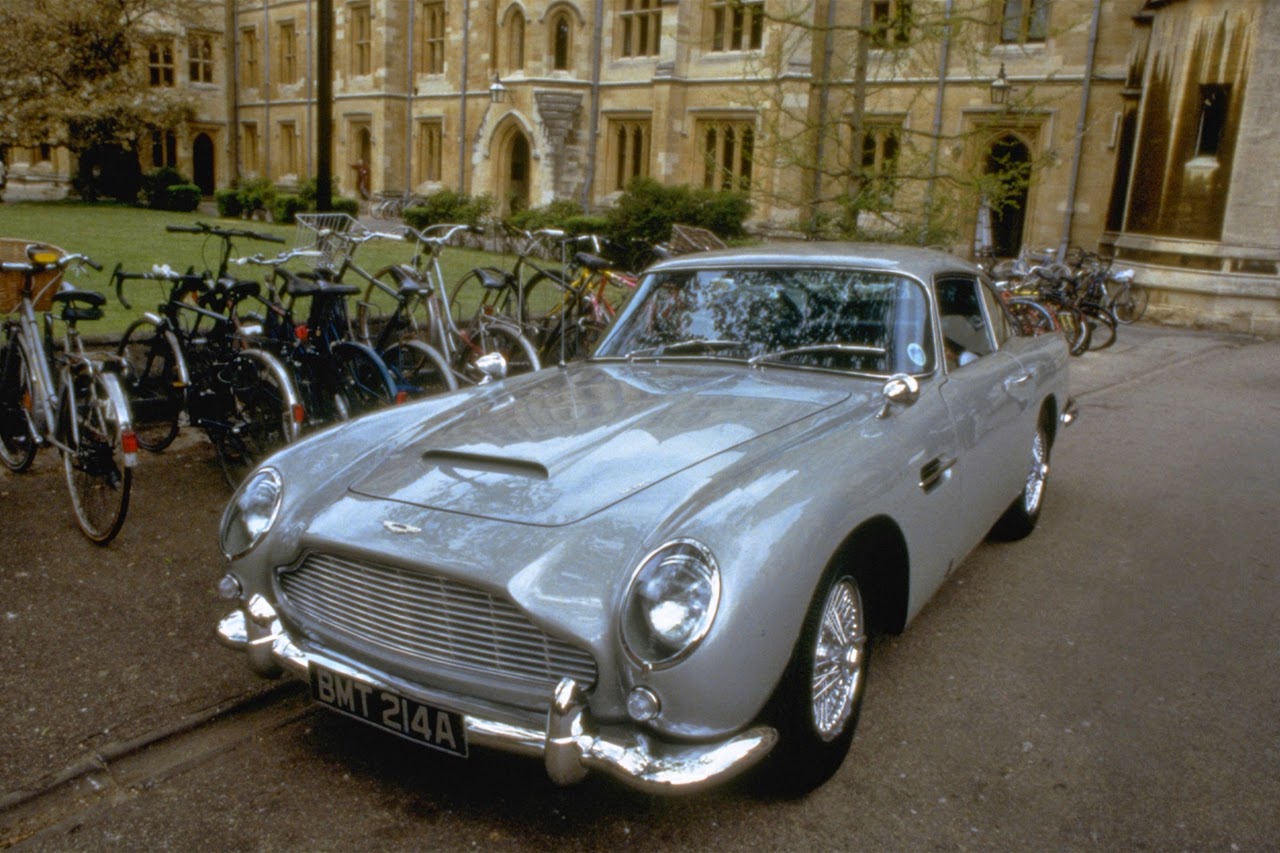 The College of Arms entrance hall

"The real Bleauchamps are without earlobes."

In On Her Majesty's Secret Service, Bond meets with Sir Hilary Bray Baronet at the College of Arms in London. Sir Hilary is the Sable Basilisk of the College and he has been contacted by the Gebrüder Gumbold in Bern who is Blofeld's solicitor in Switzerland, in order for him to establish Blofeld's claim to the title "Count de Bleauchamp". Bond arranges to take Sir Hilary's place and act as the College's representative in Switzerland. 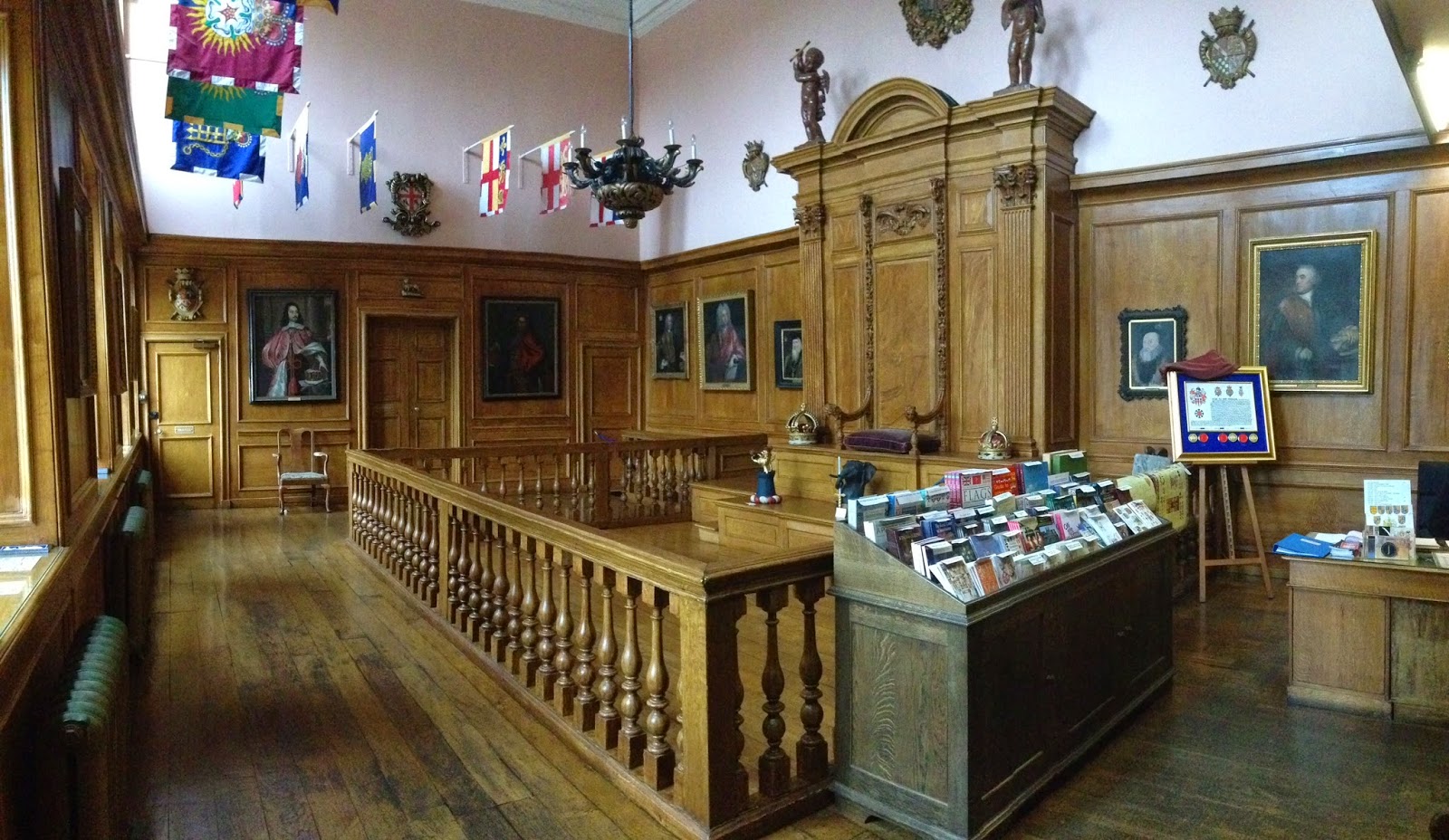 The exterior of the College features rather prominently in the film, when Bond parks his Aston outside, covered in an earlier post. One interior scene however, was probably also filmed on location, namely the entrance hall on the first floor. Bond walks past the railing and a big throne can be seen in the background. The entrance hall in the films is so detailed that it must have been filmed on location. The rest of the interior scenes were probably filmed in studio where Sir Hilary's office and the hallway was recreated by Production Designer Syd Cain, who I must say did a magnificent job in the film.

Sir Hilary shows the coat of arms of Sir Thomas Bond, with the famous family motto - "The world is not enough".
Upplagd av R. Sterling kl. 00:02 No comments: