As I've covered earlier, an episode of The Persuaders! takes place in Stockholm when Lord Sinclair is there visiting a lady friend. A woman who has just become Lady Sinclair without Brett's consent... In order to find  out whether the marriage between Brett and Kristin is legitimate, Brett  and Danny take a taxi to the parish office, apparently housed in the City  Hall in Stockholm. The building is called "the civic building" in the episode. 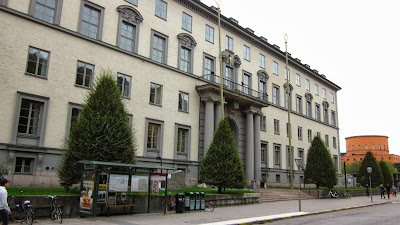 The first half of the episode "The morning after" was partly filmed in Stockholm, even though it is unlikely that Curtis and Moore were on location since they only have interior scenes in Stockholm. However the building that was used as Stockholm City Hall is really the Stockholm School of Economics, one of the leading business schools in Europe, founded in 1909. Designed by Ivar Tengbom the building was modeled after an Italian renaissance palace and was constructed between 1925-1926. 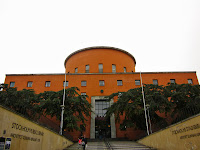 The large building with the cylinder structure visible in the background is the Stockholm Public Library, constructed in 1928. With its abstract design, this is one of the most notable buildings in Stockholm.

The two buildings are located along Sveavägen at number 65 and 73 right in the Stockholm city center. The subway station Rådmansgatan is located between the two buildings.
The building in the picture below is the real City Hall, which should have been used for the exterior shots had they wanted to show the real building.

After loosing his first ten million dollars to Le Chiffre, Bond is contemplating on the balcony/terrace of the Salon Privé. The exterior of the casino and the balcony were recreated in studio but were very true to the original building. Therefore you can recognize the balustrade and the pillars from the real building. The only thing that gives away this as a studio set are the terrace doors in the background. 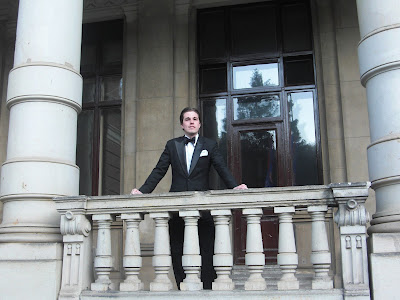 "-Looks like I'm gonna need the other five million to buy back in..."
-Bond to Vesper- 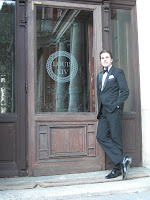 Even the original pattern on the doors to the real building have been reused on the windows of the casino doors in the studio. In the original circle it says Louis XIV, this has been changed to CR naturally. Lamont did, as always, a splendid job with both the exterior and interior production design. Despite the fact that a large part of the second half of the film takes place in and around the casino, the exterior of the building only features a few times on screen. However, the entrance featured prominently in two of the movie posters. One of the posters features Vesper standing on the steps in front of the entrance to Casino Royale. In one of the trailers, we saw a brief glimpse of the entrance, but that scene was cut from the finished film. The only full view we get of the casino is the first time when Bond arrives to the poker game. 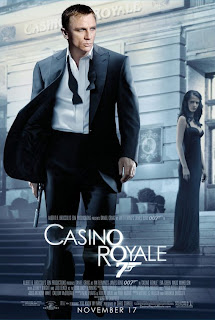 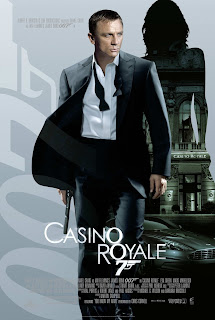 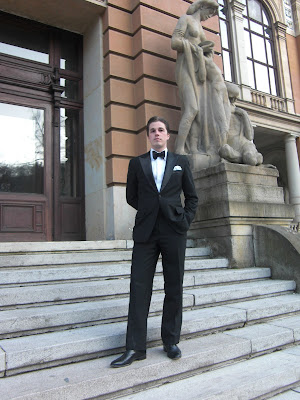 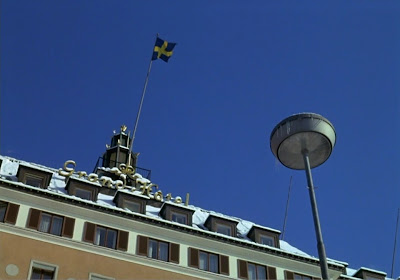 Even though Sweden has been well represented in the Bond girl department throughout the series, Sweden itself has not yet featured as a Bond location. However, Stockholm was the destination for Lord Brett Sinclair and Danny Wilde in an episode of The Persuaders! 1971. Today, our King Carl XVI Gustaf celebrates 40 years on the Swedish throne, therefore I could not resist to do a special post about one of the few Swedish locations with a Bond connection.

After his huge success with The Saint, Sir Roger Moore starred with Tony Curtis in The Persuaders!. Sir Roger chose to do only one season of The Persuaders! since he suspected that he would get the Bond role when Connery finally stepped down from the official series. 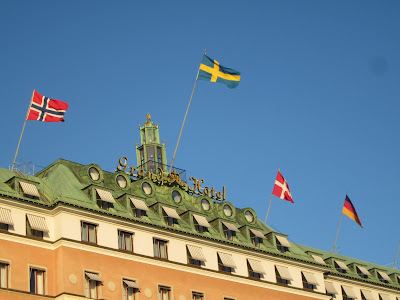 In the episode "The morning after" of The Persuaders!, Lord Brett Sinclair wakes up in his hotel room at Grand Hôtel and realizes that he has acquired a wife the night before. Wilde who has been in Finland on business has received a telegram from Brett, asking him to be the best man. Brett's "new wife", Kristin, is played by Catherine Schell, who of course played Nancy in On Her Majesty's Secret Service a few years earlier, so there are several Bond connections to the series.
Although not being a Bond location in any of the films, Stockholm was the place where Bond killed a Norwegian double agent in the Casino Royale novel in order to receive his double 0 status. Sadly in the film, Craig's second assassination takes place in Prague instead of Stockholm.


"I've got the corpses of a Japanese cipher expert in New York and a Norwegian double agent in Stockholm to thank for being a Double 0."
-Bond to Vesper in Casino Royale, chapter 9 "The game is Baccarat"- 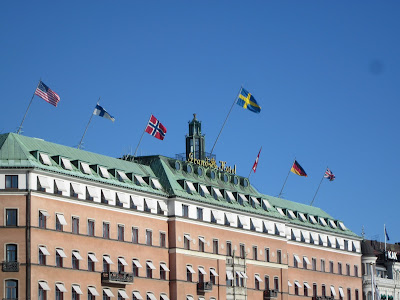 Lord Bret Sinclair is staying at Grand Hôtel in Stockholm, one of the finest hotels in Sweden and the only Swedish hotel that is a member of "Leading Hotels of the World". It is therefore not a surprise that this was the hotel of choice for Lord Sinclair. Wilde arrives and they set out to find the truth about Lord Sinclair's supposedly new wife. Grand Hôtel is located close to the national museum on Blaiseholmen, a peninsula in the Stockholm city centre. Opposite the hotel on the other side of the water is the Royal Palace.  The construction of the hotel started in 1872 and was completed in 1874. Since 1901, all the Nobel Prize laureates with families have been guests at the hotel. 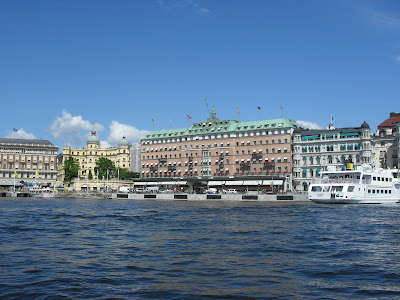 Sweden's last contribution to the Bond series was of course Ola Rapace who played the assassin Patrice in Skyfall and Jens Hultén, another Swedish actor who got into some deep water with Craig in one of the final scenes in Scotland. As one of the most beautiful capitals in Europe, one can only hope that Bond will visit Stockholm in the future. The city was prominently featured in "The girl with the dragon tattoo" starring Craig and hopefully the Bond producers will realize Stockholm's potential as a Bond location.
---
In the Casino Royale novel, Bond describes his assassination of the Japanese cipher expert and the Norwegian agent when talking to Mathis in chapter 20.
"... It was a pretty sound job. Nice and clean too. Three hundred yards away. No personal contact. The next time in Stockholm wasn't so pretty. I had to kill a Norwegian who was doubling against us for the Germans. He'd managed to get two of our men captured - probably bumped off for all I know. For various reasons it had to be an absolutely silent job. I chose the bedroom of his flat and a knife. And, well, he just didn't die very quickly. For those two jobs I was awarded a Double 0 number in the Service. Felt pretty clever and got a reputation for being good and tough. A double 0 number in our Service means you've had to kill a chap in cold blood in the course of some job.

The parallel with Bond's two killings in the pre-title sequence of Casino Royale is obvious, even though the story has been changed slightly.
Upplagd av R. Sterling kl. 23:05 No comments: 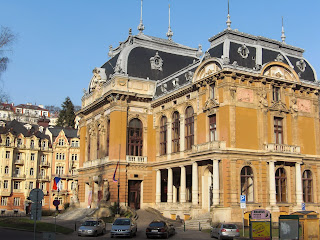 After preparing for the poker game in his hotel suite, Bond is walking down the short path from the Hotel Splendide over to the casino. The majestic casino building is in reality a former spa that has been closed for several years. Known as Lazne 1, the former Kaiserbad Spa is definitely one of the most beautiful buildings in Karlovy Vary. It is located only a few minutes from Bond's hotel, both in the film and in reality. The building is in fact in rather poor condition but was beautifully redone for the film. 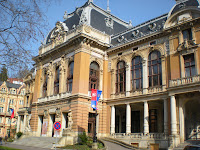 Everything is filmed on location and the path leading up to the casino can be found in the park right in front of the casino building. Grandhotel Pupp is visible in the background. On the other side of the park you can find several luxury hotels and beautiful apartment buildings. 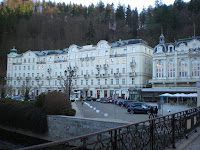 In order to reach the path leading up to the casino, Bond would have to cross the river using the bridge in the left picture. In the background is the most southern part of Grandhotell Pupp and the Pupp Casino. It is from one of these balconies overlooking the car park, that Bond and Mathis observe the Montenegro police when they find Obanno in the trunk. 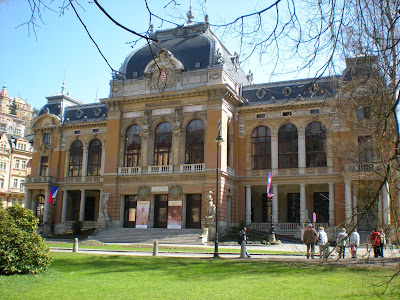 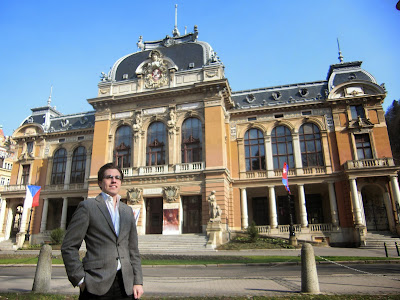 Bond and Vesper are traveling to Montenegro for the poker game at Casino Royale. Vesper is contacting Bond in the restaurant car with the brilliant recognition code "I'm the money". The background story to the film states that Bond is suppose to trade place with Mr Arlington Beech on a station in Switzerland and travel down to Montenegro in his stead. This scene was however not relevant for the film.

As Bond and Vesper are enjoying their dinner in the restaurant car, the train passes a station with the name ''Chur Ost''. Chur is a city in the western part of Switzerland and although Chur West is a real station, Chur Ost does not exist. Apparently Chur is known as the oldest town in Switzerland. It is a contradiction that it says 'Montenegro' in the first scene, but you probably have to read into it that the train is on route for Montenegro, since (given the size of Montenegro) it is very unlikely that they would have time for dinner and a good nights sleep, before arriving at their destination the next morning if they were already in the country by time for dinner.

In reality however, the train is not operating between Switzerland and Montenegro at all, since this is the Czech Railways' Pendolino fast train, also known as the ČD Class 680, operating between Prague, Slovakia and Austria.

The only indication that this train is connected to Montenegro is the fact that the logo has been changed from ČD, which is the Czech Railways symbol, to MEFT. The meaning of MEFT is unclear, but you can assume that the M stands for Montenegro.

"The treasury has agreed to stake you in the game."

The Czech Railways ordered the Pendolino train in 2000 and the first set of trains were delivered in late 2004. However a number of problems delayed it from entering into regular service for another year. The train entered regular service between Prague and Ostrava in December 2005. Today the Czech Railways' Pendolino trains operate routes between Prague and Ostrava, Bratislava and Vienna respectively.

Bond is having lamb for dinner and together with Vesper he shares a bottle of Château Angelus 1981. Also on the table are two bottles of Evian mineral water. They are in seat 47 and 44 respectively. I have not yet had the opportunity to try the Pendolino in the Czech Republic, but I doubt that they will stock 30 year old wines and serve well skewered lamb onboard.

"-How was your lamb?
-Skewered. One sympathizes..." 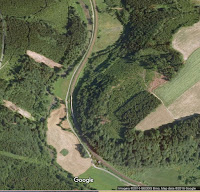 The beautiful train curve is located in the eastern part of the Czech Republic, on the route between the cities Pardubice and Olomouc, more specifically just outside the city of Ústí nad Orlicí.


The train scene is definitely one of the many highlights in Casino Royale.