Finally, our long awaited Spectre, Craig's forth installment and the 24th film in series, premiered in London on 26 October earlier this week. Naturally, a trip to London for the premiere was inevitable. It had been reported earlier this year that the film team had shot a few scenes with M, Q and Moneypenny in Covent Garden, namely at Rules Restaurant. We therefore took the opportunity to make reservations for a late night dinner. 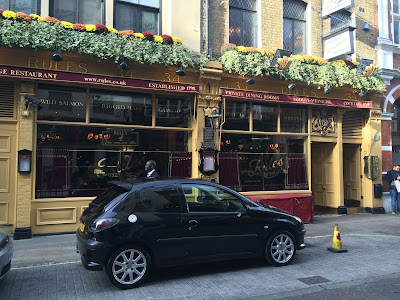 In the film, M is having dinner in the restaurant, drinking red wine when Q and Moneypenny come in. A short dialogue follows after which M leaves the table and walks out. 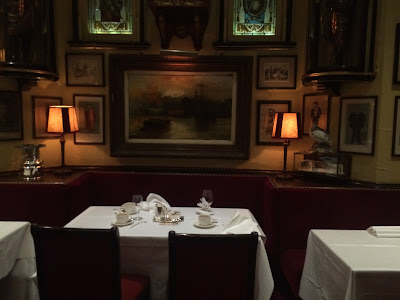 As we had yet to see how Rules would feature in the film, we had made reservations for a late night dinner following the premiere on Monday. Walking into the restaurant after the premiere that evening was very special. M's table could be spotted easily as the big painting hanging over the table (the above picture) could be recognised from the film.

Quite unexpectedly the head waiter told us, as we looked around the restaurant: "don't worry, I've given you the table", and showed us straight to M's. 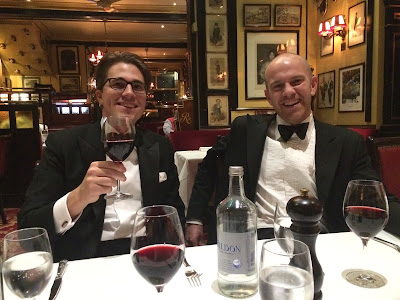 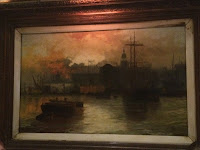 The dinner was excellent, with sterling service from the staff. Since the last order for food is 23.00 (at least on Mondays) the restaurant was fairly empty during our visit. We ordered hare, lamb and whole duck, all excellently prepared. The English sparkling water Hildon can also be seen in the restaurant in the film. The restaurant was established in 1798, which makes it the oldest restaurant in London. It is located at Maiden Lane in Covent Garden and serves traditional British food, specializing in game birds, small game, oysters, pies and pudding etc. 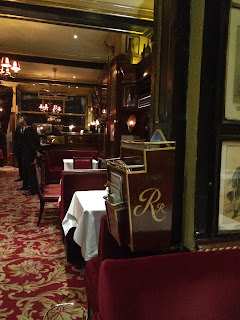 Filming at Rules took place on and around 22 May this year. One of the waiters told us that filming took three days during which time the restaurant was closed and the staff were put on leave with pay. Only a few of the staff was needed during filming. 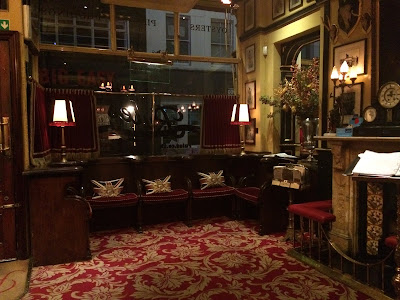 M picks up his umbrella from the umbrella stand and leaves as Q and Moneypenny are standing in the restaurant foyer. The exterior is only briefly seen in the film. 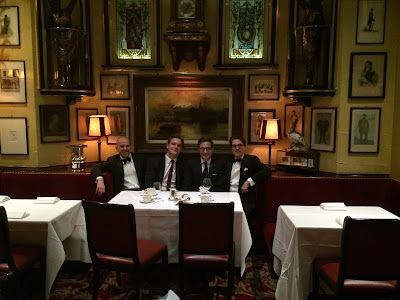 In For Your Eyes Only 1981 Bond visits the Corfu Casino to meet up with Kristatos and to play a game of "Chemmy". Before dinner while waiting for Kristatos to arrive, Bond is playing Baccarat against Bunky, who is experiencing an unfriendly shoe...


A few details can still be recognized in the palace where the scenes were filmed, for instance the distinctive lamps that still hang between the windows. Strangely enough, it also appears that the curtains have not been changed since 1981 even though the walls have been given new paint. 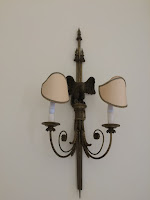 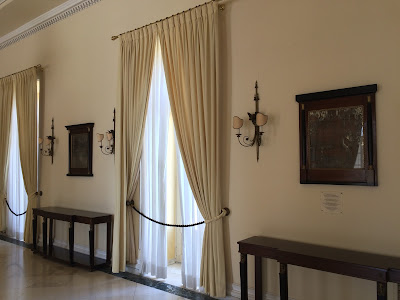 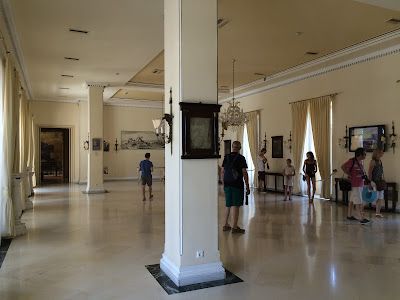 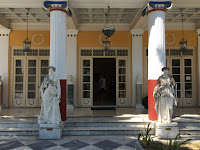 Behind the croupier, you can recognize the large glass doors that lead to the patio at the back of the palace.

Following Bond's game of Chemin-de-fer, Bond and Kristatos have dinner on the patio, right outside the casino salon. You can still recognize the black and white tiles and not much else has been changed since Sir Roger's visit. 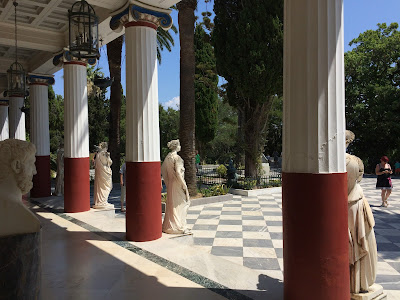 Email ThisBlogThis!Share to TwitterShare to FacebookShare to Pinterest
Etiketter: Casino, Corfu - Greece, For Your Eyes Only 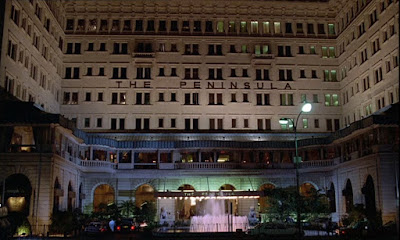 In the TV series Noble House from 1988, starring Pierce Brosnan, quite a few Bond locations from The Man With the Golden Gun feature. One of the most prominent Bond locations seen in Noble House is the Peninsula hotel, where Casey Tcholok and Lincoln Bartlett are staying throughout their visit in Hong Kong. We get several establishing shots of the entrance and the facade throughout the series. Note among other things Union Jack visible to the right in the picture below. 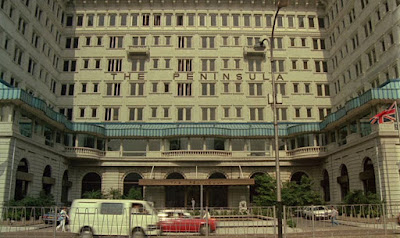 Noble House was of course filmed when Hong Kong was still a British Crown Colony, something that is most apparent in the series. The upcoming handover of Hong Kong to China and the uncertain future is cause for major concern for the main characters. It is only Mr Tip, chairman of the Bank of China, that is looking forward to the handover with confidence. 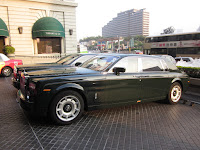 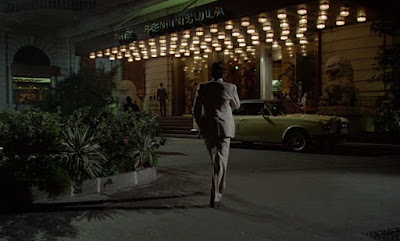 The old entrance is seen several times in the series, inter alia when Dunross arrives at the hotel in the beginning of the second episode. The entrance was rebuilt in 1994 when the steps were removed and an underground garage was built. At the same time, the the original building was expanded with a 30-storey tower, adding another 132 rooms and a helipad to the hotel. However, the classic facade was preserved and the entrance as well as the exterior is still unmistakable. 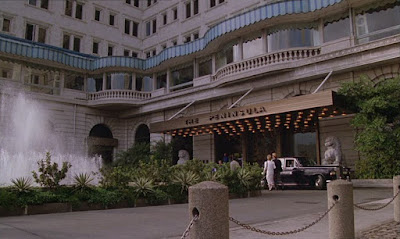 The original entrance seen in Noble House was how the entrance looked in 1974, at the time of filming of The Man With the Golden Gun covered here earlier. 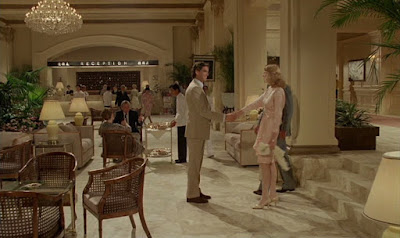 In first scene in the second episode, the Tai Pan (Brosnan) picks up Casey and Linc at the Peninsula before dinner. He meets them in the lobby which was then just a lobby. Today the lobby has been remodeled and it is the place where the famous Peninsula afternoon tea is served. 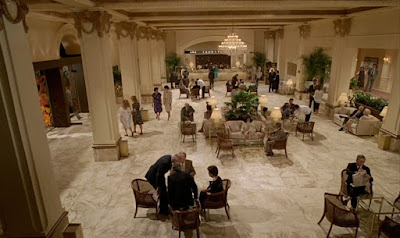 An extra row of pillars has been put in. Otherwise, the overall interior has not changed a lot since 1988. 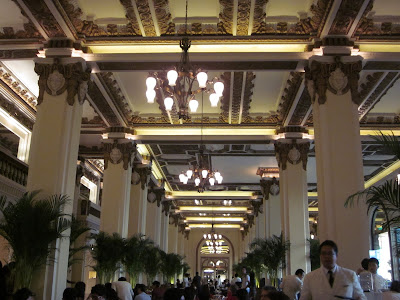 "-And what do you forecast will happen in 1997, when the treaty making Hong Kong a British colony expires, and all this reverts to us, and becomes truly part of China once again.
-I think 1997 will take care of 1997. But old friends will still gonna need old friends."
- Mr Tip and Dunross discuss the future of Hong Kong in the first episode- 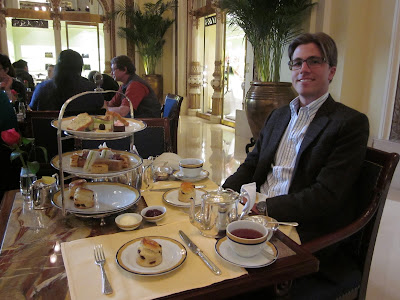 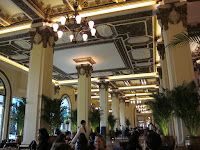 Afternoon tea at the Peninsula is a memorable experience. It is not possible to reserve a table, unless you are a guest at the hotel, something else that makes being a guest a the Peninsula worth it. If not, you may have to queue for up to an hour or more while waiting for a table. 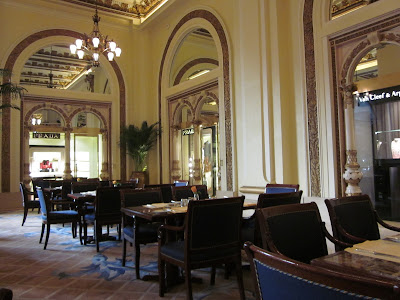 In Never Say Never Again, Fatima Blush kills Bond's ally Nicole, agent 326, and escapes in her Renault 5 Turbo 2 through the streets of Villefranche-Sur-Mer and Menton. Bond pursues Fatima on his motorbike supplied by Q. A large part of the motorbike chase was filmed in the beautiful town of Menton on the French Riviera. 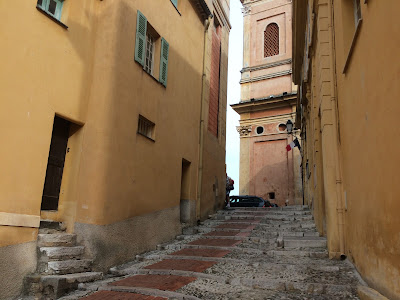 As Bond is driving up some steps in the old part of Menton, the side of a church is briefly visible at the top of the steps. The church visible in the background is the Basilique Saint Michel, a Catholic basilica located in Menton's historic city centre. 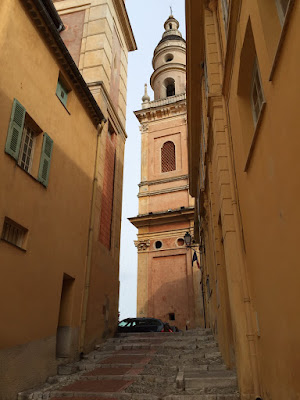 The construction of the basilica begun in 1619 at the request of the Prince of Monaco, Honoré II, who was the son of Hercule, Lord of Monaco between 1562 and 1604. The basilica has been a historic monument since 1947. If you are walking down the steps back to the city centre, you will find a lot of nice restaurants and small shops. For instance, Place aux Herbes is a perfect place for a spot of lunch. 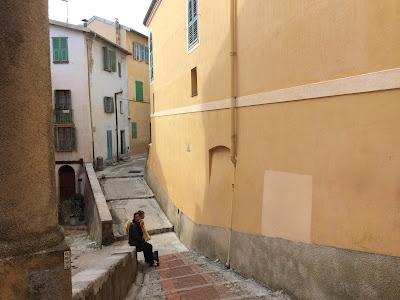 Bond is coming down Rue de Palmier with the motorbike and continues up the steps to Place de la Conception in front of Basilique Saint Michel. From the top of the steps you will have a beautiful view over the sea and part of the Menton coast line that leads to Italy.

In the pre-title sequence of Skyfall, Bond chases Patrice through Istanbul on a motorcycle. Before driving up on the rooftops of the Grand Bazaar they drive over a large courtyard in close connection with the more famous part of the bazaar. In the previous scene we learn that the place where Bond and Patrice enter is called Büyük Valide Han. In the picture it is evident that the crew has filled the stairs with sand in order for the stunt men to drive up the stairs more easily. Due to the promotional agreement with Heineken, crates with Heineken can be seen to left. 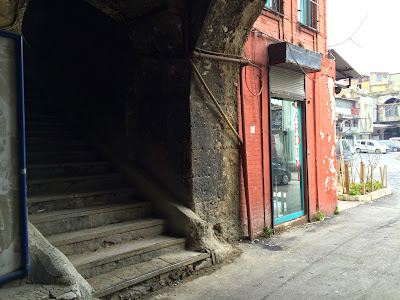 At this location you find the place where Patrice is cut off by a van and instead drives up the stairs that lead up to the second floor. The location is still very recognizable and few tourists find this place since it is located in the periphery of the bazaar area.


Büyük Valide Han is one of the oldest Hans in the bazaar. It dates back to the 17th-century and has accommodated traveling merchants for over 350 years. It also stored the Oriental and European wares from the wooden ships moored in the Golden Horn.

If you walk through the archway and continue for a minute or two, you will come out where Bond and Patrice are driving in, namely at the entrance to Büyük Valide Han.

The chase was filmed from different angles. Bond and Patrice are driving into the Han from the other direction than they are coming from in these last two pictures, before going up the stairs. 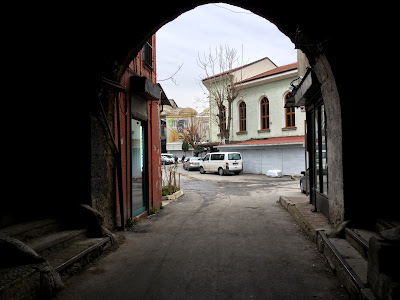