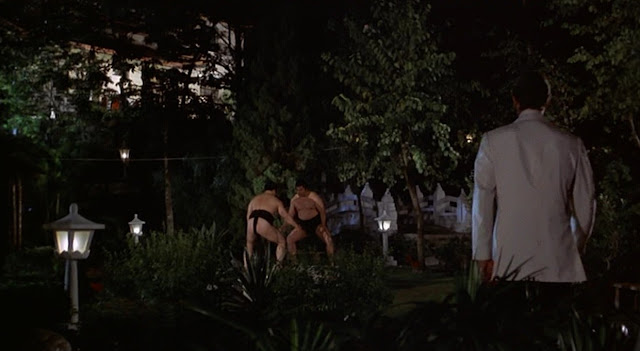 When Bond is invited to dinner at Hai Fat's estate in Bangkok, he arrives later that evening properly dressed in a white dinner jacket. His cover is blown however and Hai Fat has staged a stupid trap for Bond, in true Moore spirit. Disguised as statues, two sumo wrestlers are waiting to take care of Bond, but when that fails, obviously (!), Nick Nack knocks Bond unconscious and is ready to finish him off. Then Hai Fat changes his mind and decides to let Bond live just a little bit longer. He orders Nick Nack to take Bond to his karate school. 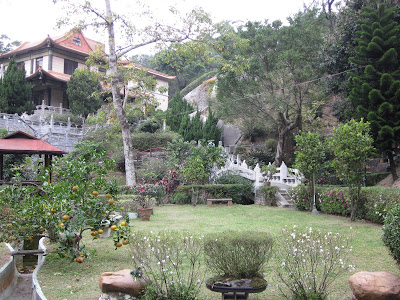 As I've covered before, the Bangkok residence is actually located in Hong Kong, where all the scenes were filmed (although the scene where Bond exits his hotel was filmed in Bangkok). The estate is called the Dragon Garden and can be found in Hong Kong's New Territories, approx 1 hour from downtown Kowloon. There are several buildings on the estate, including the main building seen in the picture above, the mausoleum and the building where Hai Fat later gets killed. The swimming pool can also be found in the lower part of the garden. Close to the building that supposedly is Hai Fat's living quarters, is located the small white bridge where Hai Fat enters the lower part of the garden.
Hai Fat is stopping Nick Nack just before he is about to put a spear through Bond's neck. Bond is then taken to Hai Fat's karate school outside of Bangkok (these scenes were actually filmed on location in Thailand). 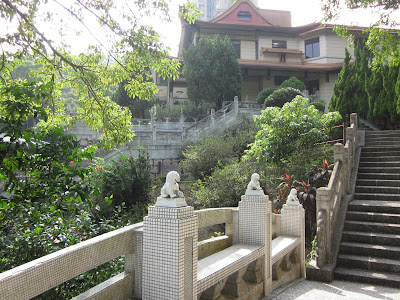 The stone bridge is covered with white mosaic and the steps lead up to the house. Just above the bridge, on the right side, is the water spouting dragon, that gave the garden its name. The bridge is also visible behind the dragon in one of the first scenes where you see Hai Fat's guards walking around the place. 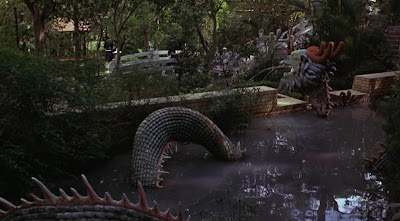 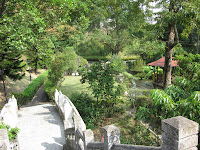 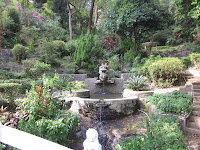 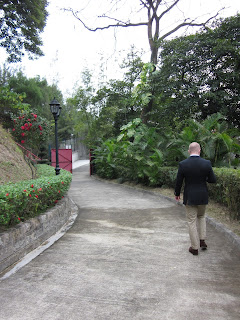 Bond is walking down the path that leads up to the garden from the red front gate. This path is still easily recognized and can be found just where you expect it, starting behind the front gate (covered earlier). Some of the lamp posts can still be recognized from the film. Of course none of the statues seen in the film where a real part of the garden. The Dragon Garden is still under renovation, and heaven only knows when, or if, they will open it for the public, although they had been making some progress during the past year. If anyone know something about the status of the renovation process, please let me know. The garden is a must visit when one is in Hong Kong, but since it is a private residence you can't expect to be allowed inside.

Email ThisBlogThis!Share to TwitterShare to FacebookShare to Pinterest
Etiketter: Hong Kong S.A.R., The Dragon Garden, The Man With the Golden Gun

A drive in the country

After escaping Gonzales' guards, Bond hitch a ride with Melina in her rented Citroën 2CV and the car chase around the "Spanish countryside" begins. Gonzales' men are chasing them in two black Peugeot 504.

"I'm afraid we're being out horse-powered!"
-Bond to Melina-

The car chase was filmed on the surrounding roads of Pagi, the small village in the north-western part of Corfu. After Melina flips the car over at the low road, filmed in Pagi, Bond takes over the wheel and they drive around the olive fields, trying to loose Gonzales' guards.
The roads that surround Pagi are a sheer pleasure to drive around, and you should definitely play tracks like "Gonzales takes a drive" and "a drive in the country" in the car. These roads are some of the most memorable roads I have ever driven and, combined with the right music, this has been one of my best driving experiences so far. The road from Nice to Monte Carlo is another one.

The olive fields can be extremely steep in some places and it is not unthinkable that a car could end up in a tree. So the baddies Peugeot ending up on top of an olive tree is actually quite feasible. 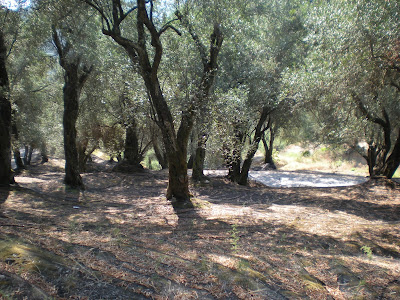 After all the science fiction chaos in Moonraker, the producers wanted Bond to come back down to earth in For Your Eyes Only. They wanted him to rely more on his own abilities rather than Q's gadgets and that is the reason why they have his Lotus blown up before the car chase starts. Bond is left with Melina's indestructible Citroën.

The chase was filmed over a two week period in Corfu and was arranged by stunt driver Rémy Julienne, a former French motor-cross champion. He had started his career in film already in the 60's and was hired by the Bond team for the first time in 1981. Julienne, who was the driver of the Citroën, would remain with the Bond series for another 14 years, doing all the stunt driving up to GoldenEye. Rémy Julienne, with more than 400 film and television productions behind him, is considered to be the "daredevil of French cinema". 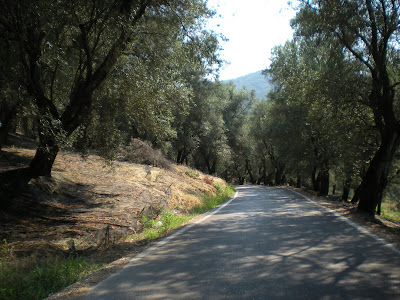 Of the one-time-only composers, I believe that Bill Conti did the best job delivering a timeless and yet appropriate soundtrack. It is not on the same level as the best soundtracks composed by the gentlemen Arnold and Barry, but I do believe that it is better than the less inspiring work of John Barry, for instance Moonraker and Octopussy. Despite being written in the 80's, the soundtrack of For Your Eyes Only is relatively timeless and the instrumental version of For Your Eyes Only is among the highlights on the album. Bill Conti is also known for the soundtrack of The Thomas Crown Affair, with Pierce Brosnan.
Upplagd av R. Sterling kl. 11:59 No comments:

Email ThisBlogThis!Share to TwitterShare to FacebookShare to Pinterest
Etiketter: Corfu - Greece, For Your Eyes Only
Plats: Agios Georgios, Grekland

After winning the poker game at Royale, Bond and Vesper are having a late night dinner in the restaurant back at the Hotel Splendide. It should be around 3 or 4 o'clock in the morning, but apparently the kitchen is still open for the guests. Bond is served another Vesper (don't know how many he has had before) and Vesper is drinking Bollinger La Grand Année. They are served caviar and toast along with the drinks, but it appears that Bond is the only one with an appetite.

The restaurant scene was filmed at the Grand Hotel Pupp restaurant in May 2006, along with all the other scenes shot in the beautiful Czech town of Karlovy Vary. Bond's table has a nice view over the river that runs alongside the hotel. 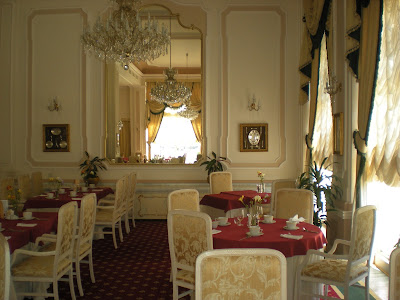 The restaurant at the Grand Hotel Pupp is excellent, and the waiters are providing a sterling European service that would be fitting for Bond. If you visit the hotel during low season it should not be a problem to get Bond's table from the film. The restaurant gave a very positive impression and the food was very well prepared. 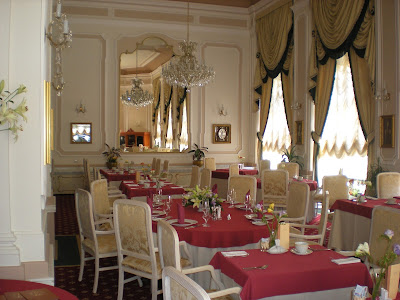 For dinner we had pan-fried fois gras, lamb with mint sauce and of course a bottle of Bohemia Sekt, the biggest producer of Sparkling wine in the Czech Republic. Don't forget to order a bottle of Mattoni as well, a mineral water from the nature in the surroundings of Karlovy Vary, tapped on location. When one is in Karlovy, one should delve deeply into its treasures...

Just like in the novel, Bond and Vesper are having caviar and Champagne for dinner, again a very subtle nod to the original Fleming story. 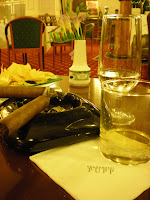 Post dinner it is highly recommended to enjoy a drink and a cigar in the bar lounge. Eastern Europe is still a heaven for cigar lovers, since they haven't banned smoking in bars, casinos and night clubs. Yet...
Walking around "Casino Royale" and all the other beautiful buildings and the adjacent park is a magnificent experience.

Grand Hotel Pupp also has its own casino in an adjacent building, so why not loose a few koruna on Roulette. The Czech Republic is reasonably cheap, even though Karlovy is a rather expensive city. 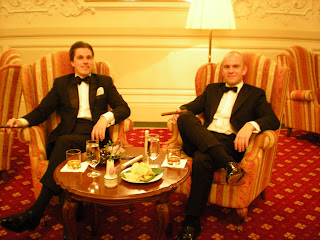 On the job in Hong Kong

After a far too long vacation I am back behind my computer and it is finally time for a new Bond location. The first post for August takes Bond back to the old British Crown Colony...

In the beginning of You Only Live Twice, Bond is working on a case in Hong Kong. He is enjoying the company of a Chinese agent in a hotel room when he is rudely interrupted by two gunmen. Ling, the Chinese agent, is in fact also working for Mi6 and is there to help Bond stage his own death.

"Well at least he died on the job..."
-Royal Hong Kong police officer-

After the assassination, the Royal Hong Kong Police Force arrives at the scene. This exterior shot was filmed at Hong Kong's famed shopping street, Nathan Road in Kowloon. Of course Hong Kong has changed beyond recognisability, but the part of Nathan Road that was seen in the film was allegedly 611-615A Nathan Road in Mong Kok. Located on the Kowloon side of Hong Kong, Nathan Road starts on the southern part of Kowloon at its junction with Salisbury Road, right where The Peninsula is located and continues north.

A villain is observing Bond's funeral from the Hong Kong Yacht Club while reading Bond's obituary in The Hong Kong Tiger Standard. Today simply known as The Standard, the free English newspaper is still distributed in Hong Kong. The article however is a fake. You can clearly see that Bond's obituary has been put in afterwords to match the cover page.


However, the article reads:
"In the early hours of this morning, in a Hong Kong Hotel bedroom, was recovered the body of the British Naval Commander James Bond.
The body was discovered by two police inspectors of the Hong Kong Police Force, who answered an emergency call from from a nearby bar. The gunfire was heard by people in the street below and the police were on the scene within minutes. As yet there has been no arrest but the police..."

"Like Peking duck is different from Russian caviar, but I love them both."

The Chinese girl, Ling, who appears to be a bad girl is actually hired by Mi6 to help with arranging Bond's "death". Ling is played by Tsai Chin and this Shanghai born actress (born 1933) was in fact the first ever Chinese to be trained at London's Royal Academy of Dramatic Arts (RADA) in the 1950's. RADA is of course known to Bond fans as the drama school where both Sir Roger and Lois Maxwell got their education. In London's West End, Tsai Chin have starred in, among other things, 'The World of Suzie Wong' (the novel taking place in Hong Kong, also referred to by M in The Man With the Golden Gun).

The Bond connection continued when Chin made an appearance in Casino Royale, almost 40 years after her close encounter with Connery in Hong Kong. In Casino Royale she portrays the mysterious Madame Wu, who played poker against Le Chiffre on his yacht and also participated in the poker game at Casino Royale in Montenegro.

"Darling, I give you very best duck!"