"The PM would have my head if he knew we were investigating him."

In Tomorrow never dies, Bond is sent to Hamburg in order to investigate scrappy Media Mogul Elliot Carver. Carver is holding a party to celebrate the launch of his new satellite and Bond is posing as a banker. Appropriate to his assumed identity Bond is checked in to the Hotel Atlantic just by the lake Außenalster in central Hamburg.

Bond is staying in the corner suite and after a visit from Dr. Kaufman he escapes through the window and up on the roof, observed from the other building by Stamper. Bond accesses the parking garage where his Ericsson remote controlled BMW is parked. The following car chase was not filmed on location in Germany but in Brent Cross shopping center in England and will be covered at a later date. The interior of Bonds hotel suite was actually filmed at a previous Bond location, namely the Stoke Park Country Club in Buckinghamshire seen in Goldfinger. 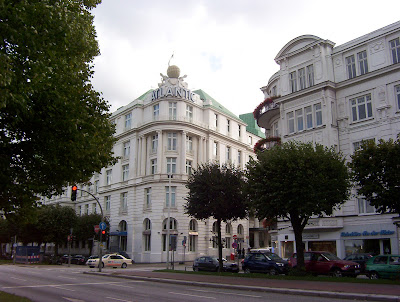 The hotel was opened in 1909 and has been considered to be the best hotel in Germany. Since 1957 it belongs to the international hotel chain Kempinski and the rate for a standard room is approx. € 250 per night. One of the Atlantic suites, probably similar to what Bond stayed in would cost about € 3,500 per night.

Other famous guests, besides the banker James Bond, that have stayed in the hotel are among several others: Zarah Leander, Charles de Gaulle, Maria Callas, Michael Jackson and Willy Brandt.

In Casino Royale, Bond and Vesper are picked up at the Montenegro train station and driven to the Hotel Splendide in a Daimler limousine. The Daimler takes a somewhat unexpected way to the hotel. 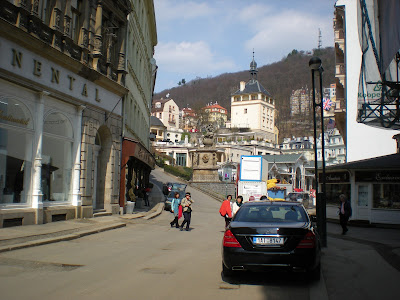 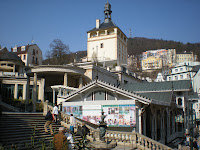 Of course the Montenegro scenes were all filmed in the Czech Republic and especially around the spa town of Karlovy Vary, 2 hours west of Prague. The road the Daimler is traveling on is Tržiště in the southern part of the city. Tržiště divides in two and the right part, the one Bond is traveling down on turns into Lázeňská after the curve. Lázeňská is actually the road where the car is parked in the first scene at the train station, when Bond receives his envelope. Following Tržiště backwards you end up in front of Grandhotel Pupp, which of course played the part of Hotel Splendide in the film. So ultimately the car is going the wrong way, away from the hotel. At the time of our visit to Karlovy Vary the road was under renovation and it has probably been turned into a some kind of pedestrian street. 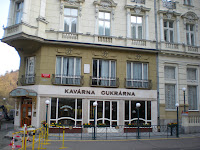 After a drive around town they finally arrive at the Hotel Splendide from Goethova stezka. This road passes the Casino Royale building before going over the river and up to the hotel. On the way you pass the car park where Bond finds his Aston parked. The entire hotel complex covers almost two blocks and will be covered in detail later, as well as a night in one of the suites. But the small hotel parking lot, formed as a gun barrel, is still there with the parking spaces still recognizable. Unfortunately the streets were also being renovated outside the hotel so it was not accessible for parking.

But the building is the same and very recognizable. Karlovy Vary is a beautiful city and especially the buildings around Grandhotel Pupp. CaféPupp on the corner of the hotel has been given a new Montenegrin name instead of "Kavárna Cukrárna" which translates to Café patisserie in Czech. 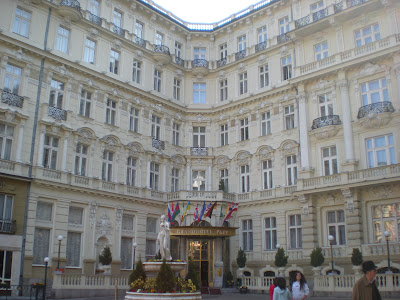