Connery returned 12 years after Diamonds to do the unofficial Never say never again. The film is a bad remake of Thunderball, produced by Kevin McClory and Jack Schwartzman in 1983. McClory had retained the rights to the Thunderball story in the 60's, and was allowed to remake the film after ten years had elapsed from 1965. 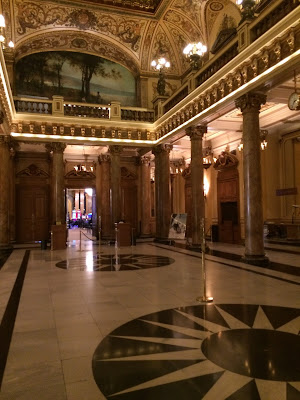 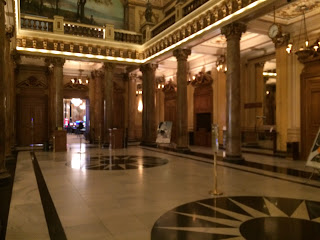 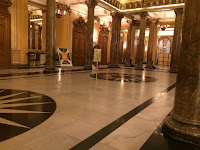 In the film, Bond follows Largo to the south of France. After meeting Domino at "la centre de la santé" in Villefranche-sur-mer he learns that Largo is having a charity ball at the casino and Bond crashes the party. For some of the scenes the real Casino de Monte Carlo was used. Most notable is the excellent tango scene with Bond and Domino. This scene was actually filmed in the big entrance hall after the lobby. Photography is not allowed so getting some pictures is hard, hence the rather poor quality. The hall is accesible for non-gamblers as well but it is truly a fantastic location that should be enjoyed before a game of Roulette or Baccarat in the most famous casino in the world. 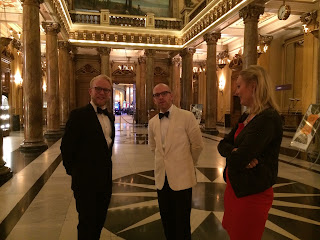 Never was actually the first time Bond went to Monaco, but Brosnan would later bring the secret agent back to the casino in 1995 for GoldenEye. Unfortunately the Franc has been replaced by the Euro and smoking is no longer allowed inside the Casino... 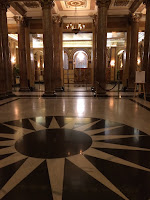 "-Your brother is dead. Keep dancing!"

Bond is entering the casino from the right side (facing southwest), observed by Fatima Blush. This is actually  the entrance to the Opéra de Monte-Carlo, which is located in the same building as the casino. It houses La Salle Garnier, an exact replica in miniature of the Paris Opera House, designed by Charles Garnier. It is here Bond knocks out the guard and fools him with his cigarett "bomb" case to keep him in the closet.

They make no reference to the fact that they are at Casino de Monte Carlo in the film. In fact, a sign in the entrance says that the charity ball is held at "Casino Royale in Monte Carlo". This is probably why they didn't use the very recognizable main entrance of the casino.


Never say never again should not be compared with the rest of the films in the series, but if it did, it would end up at the bottom. Brandauer is a poor choice for Largo and terrible in comparison with Adolfo Celi in Thunderball. Leiter is cliché, the dialogue is badly written and Kim Basinger's acting is bad. Practically all the actors are poorly chosen for their respective roles. Rowan Atkinson is funny, but doesn't belong in a Bond film. However, they did a few things right. Connery and Carerra is very good in the film and so is the music by Michael Le Grand. To sum up: it is a bad comedy but Connery, Carrera and LeGrand, combined with the locations in the Bahamas and at the Riviera makes it worth watching. Another interesting fact is that Bond is drinking Absolut Vodka for the first, and last time. So far... 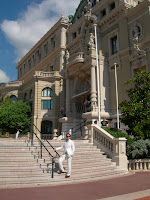 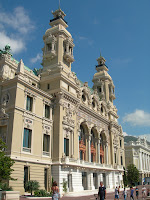 The Connery steps and the Casino/Opéra seen from the back, facing the Mediterranean.

The pleasure I'm sure was all mine...

In GoldenEye, after Bond leaves the casino he follows Xenia and the admiral to the Monaco Yatch club where he observes them board the speed boat heading for Yacht Manticore. Bond is watching them from 'Fort Antoine', an open air theatre originally built as a fort at the beginning of the 18th century. From here you have the same view as Bond when he observed Xenia. 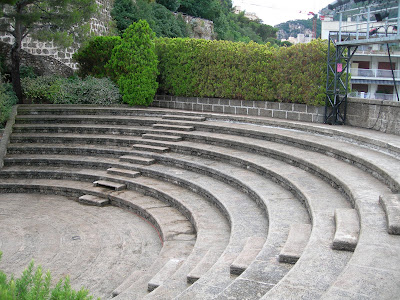 Occasionally during the summer season there are performances at the theatre, but it's normally open for visits, so just take your time and enjoy this location with the beautiful view over Monte Carlo harbour. The Avenue de la Quarantaine leads up to the fort from the Avenue du port in the area called La Condamine. 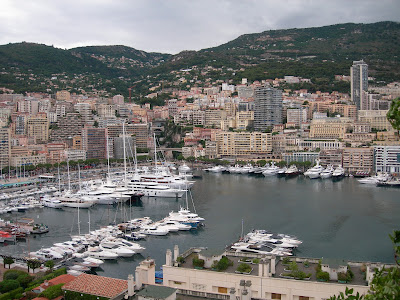 Hand me that wrench Jimmy!

Tomorrow never dies was actually the second time Brosnan visited Somerset House during his Bond career. The first time was in GoldenEye when Jack Wade's car broke down in the middle of a square in S:t Petersburg. This scene was also filmed in the courtyard of Somerset House covered in the last post. The filmmakers very cleverly used the couryard and some Russian cars to create the feeling of a busy Russian roundabout. 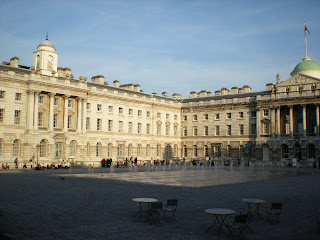 A lot of the locations that doubled for Russia can be found in and around London, such as the church "Our lady of Smolensk", "Grand hotel Europe" (covered earlier), The interior of "Lady of Smolensk", "S:t Petersburg airport", the 'meeting room' with the defence council and minister Mishkin and "S:t Petersburg train station". All these locations will be covered later. 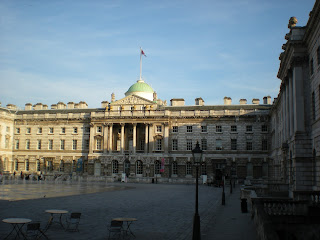 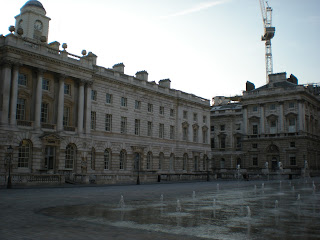 In Tomorrow Never Dies Bond has to kiss off his danish lesson at Oxford and drive down to the Ministry of Defence in central London. A British frigate has been sunk in the South China sea and Admiral Roebuck wants to send the British fleet to China rather than letting have M investigate the situation. Bond is rushed in and arrives on the road Strand. 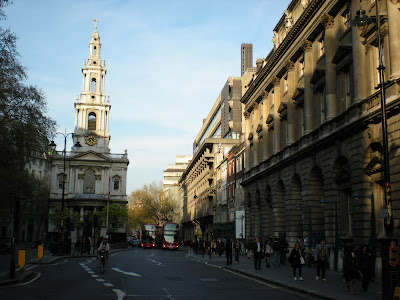 To the left in the picture is S:t Mary le Strand church, briefly visible in the film. The present church was built at this location between 1714-1717 after the original church (further to the south) had been pulled down to make way for Somerset House in 1549. It is today the official church of the Women's Royal Naval Service. It has a book of remembrance for members who have died in service (possibly a clever reference to the fact that Bond is on his way to the Ministry and the Admiral).

The exterior and courtyard of the Ministry was filmed at Somerset House and the entrance where Bond drives in, is in fact the actual entrance from Strand. Bond is arriving from the north side and in the courtyard you can see M's Daimler parked, along with the police escort. 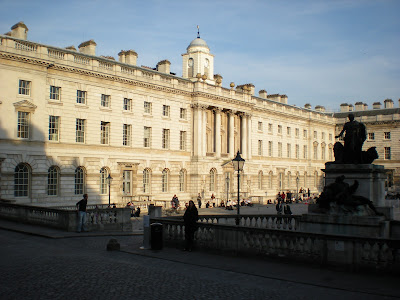 Somerset House has a long and complex history that dates back to the 16th century and it would be impossible to do a sum up. For the entire history you can look here: http://www.somersethouse.org.uk/history

But the most interesting fact is that when the Admiralty moved in to new premises in Whitehall in 1725, it was decided that the Navy Board*, over whom the Admiralty had responsibility, should move to offices in Somerset House. By 1789 the final move was completed and, for nearly a century, more than a third of Somerset House was home to the various branches of the Navy Board. The old history and references to the navy is maybe one of the reasons that they chose to shoot the scenes of Bond arriving to the Ministry of Defence here. 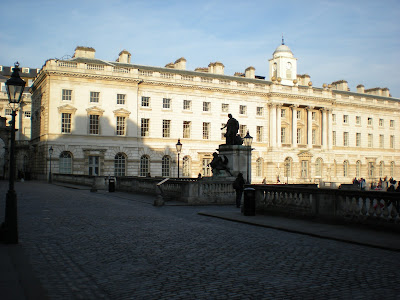 *From 1546 to 1832 the civil administration of the Navy was controlled by the Navy Board. The board was abolished in 1832. Its functions were transferred to principal officers of the Navy and their activities placed under the supervision of the Admiralty Board.
Upplagd av R. Sterling kl. 22:50 No comments: