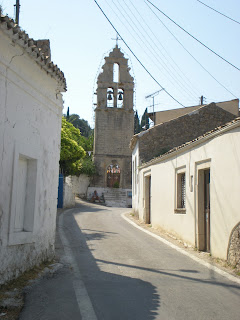 After flipping the car over at "the low road" Bond takes over the wheel of the iconic Citroën and the car chase begins. Bond and Melina are follwed by two of Gonzales' black Peugeots through the village of Pagi and the surrounding countryside. The action is supposed to take place in Spain, near Madrid, but was filmed in Corfu, Greece. The cars are driving past the bell tower of a church in Pagi. This architectural character, with the separate bell tower, is strongly influenced by the Venetian style. After nearly 400 years of Venetian rule between the 15th and the late 18th century, the Venetian architecture can still be found all over the island.

As the cars drive through Pagi, a man washing olives from the harvest looks up as they pass his home. This house and the driveway can also be found on location, just 50 meters before the bell tower. The road that runs through Pagi, and past this house, is called 'Epar. Od. Arkadades-Agiou Georgiou' and apparently covers a good part of the north-western part of the island. 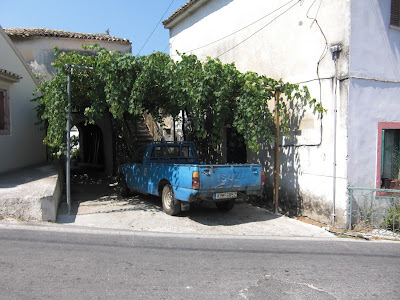 Olives in Corfu are harvested from November to April so this is the time to visit Corfu if you want to watch an authentic harvest. Filming in Corfu started in September 1980 and according to the special location section on the Bluray, the scenes in Pagi were filmed in mid-October, which becomes obvious when you compare my pictures from mid-July.

The Citroën is actually passing the church already before the "low road", when entering the village. The steps have been hidden behind an old woman selling flowers. Thanks to the clever filming you never realize the fact that the car went in and out of Pagi the same way. 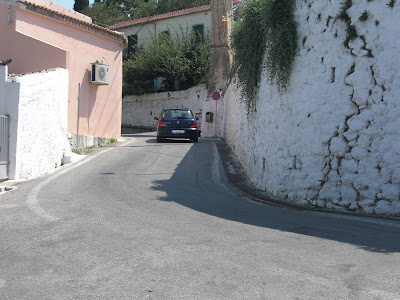 In the picture above: the bell tower is visible to the right in the curve and this is the same way as the Citroën was driving when entering the village. 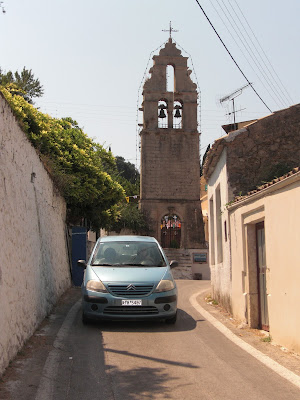 The expression Bond uses to get the crowd to bump start the car is "campo allá", which actually is translated to "beyond the field". Bond meant of course to say something like "let's go", but campo allá is evidently a more rural choice of words, which would be appropriate in the Spanish countryside. However, chances are that no one would understand what you mean if you use this kind of expression in central Madrid.

Email ThisBlogThis!Share to TwitterShare to FacebookShare to Pinterest
Etiketter: Corfu - Greece, For Your Eyes Only
Plats: Pagi 490 83, Grekland

A few locations have doubled for different places throughout the series, for example Somerset house that was used as the Ministry of Defence in Tomorrow and as a Russian square in the middle of S:t Petersburg in GoldenEye. Another location that was used in both Die another day and Quantum of Solace is the Reform Club in London.

In Die another day, Bond meets with Gustav Graves at the fencing club ''Blades''. After an old fashioned sword fight, where they destroy a good part of the club, Gustav settles his lost wager in the lobby.

"My my, they do get around. But then diamonds are for everyone."
-Gustav Graves-


The scenes at Blades were filmed at the renowned Reform Club in central London. A classic gentlemen's club that was founded in 1836 and probably the most sought after club for any Bond fan. Originally membership was restricted to those who pledged support for the Great Reform Act of 1832 (given middle-class men the right to vote) and the liberal club was meant to be a counterweight against the Tories. Today the political connection is gone, even though the club maintain its liberal and progressive traditions. Since 1981 the Reform Club is open for female members.
The fencing scenes at Blades are among the highlights of the film, even though Madonna's role as fencing instructor Verity is totally pointless and, just like the title song utterly worthless. Madonna's appearance ruins an otherwise splendid scene between Brosnan, Stephens and Pike at the club. Part of the sword fight was filmed in the upper gallery of the club juxtaposed with scenes filmed at Pinewood and the "lobby" scene with Bond and Graves was filmed in the square atrium on the ground floor, located a few steps up from the entrance of the club.

After sending off Graves and Frost in the lobby, Bond receives M's calling card: the key to a secret underground station that is part of Mi6. During this scene you see the floor pattern in the Reform Club lobby. The floor can be recognized in Quantum of solace (see below).

In Quantum of solace, M has been called in to the Foreign Secretary to explain Bond's actions in Bolivia. Before entering his office, she walks down the hallway of the Foreign Office with Tanner. This scene was also filmed at the Reform Club. The stairway and statue in the background can be recognized from the scene at Blades, as well as the floor from the square atrium.

In 2011 I was fortunate enough to visit the club and the interior is absolutely magnificent. Both the atrium on the ground floor and the upper gallery, where part of the sword fight took place, still look exactly like in the two films. The atrium is reminiscent of an Italian courtyard, and inspired by Italian Renaissance architecture, this is one of the finest Victorian buildings in the country. The building has remained almost unchanged since completion in 1841 (a few years after the founding of The Reform Club). The stairs (seen behind M) is elegantly decorated with tunnel-vaulted mirrors that creates the effect of a massive staircase.
The feeling you have when you walk up the stairs to the upper gallery even surpasses the feeling you have at the Peninsula in Hong Kong or Casino Monte Carlo. Unfortunately, photography is prohibited and in places like this you do not even want to try if you are not a member. I suppose I have to wait for a membership... 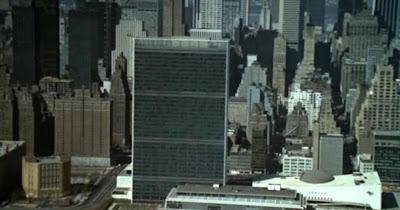 Probably the most uninspiring pre-title sequence in the entire series is the one from Live and let die 1973. Three British agents are killed in three different locations. One is killed in New York, which is the reason for M to send Bond over there to come up with some answers. The agent is attending a session in the United Nations when the film starts, and is killed with a sonic weapon through his headphone translator. The building pictured in the film, of course being the real United Nations building, is located in New York on the bank of the East river where it has been since the completion in 1952. 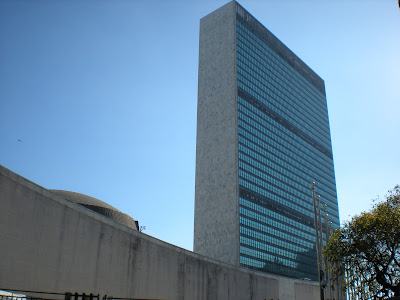 Of course Bond never visits the UN during his relatively short visit to New York, and a more interesting location would of course be the 'Oh cult voodoo shop' at 33 east 65th street. Even though the United Nations is not a very interesting Bond location it is more attractive as a tourist site. This is the very heart of world diplomacy and a visit is strongly recommended when one is in New York, regardless of the Bond connection. 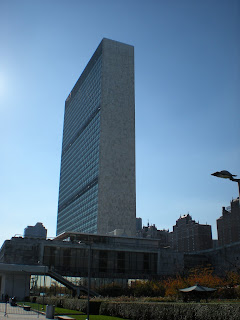 You will have the best view over the building from the Brooklyn side, probably around the area of Hunters Point but the more classic view is the one from 1st avenue in Manhattan. Here you can see the line of flagpoles where the flags of all the 193 UN member states are flown. 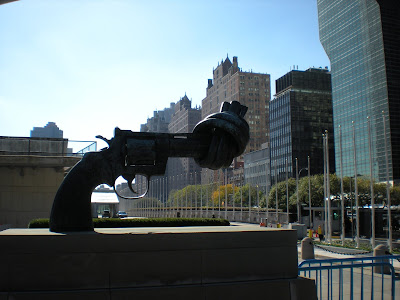 In front of the building you can also find the classic "knotted revolver", designed by the Swedish painter and sculptor Carl Fredrik Reuterswärd. The sculpture was made after the killing of John Lennon in December 1980 and has ever since been a non-violence symbol. The revolver can be found on several places in Sweden and also in a few dozen countries throughout the world. 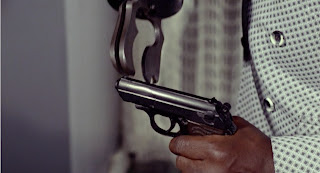 An interesting coincidence is the fact that Bond gets the barrel of his Walther PPK bent by henchman Tee Hee, when he meets with Mr Big in New York. Since the sculpture was made in the 80's it has absolutely no significance to the film or whatsoever, but I thought it was a fun trivia to mention. 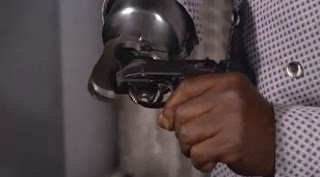 Not surprisingly the city of New York is portrayed very dull and uninspiring, with the lack of a proper skyline or other famous sites like the Brooklyn bridge, World trade center or the Statue of Liberty. This is, as I have mentioned before, a consisting theme in Guy Hamilton's last three Bond films, from Diamonds to Golden gun. Live and let die is definitely one of the weaker films in the series, mainly due to the fact that it's just boring, even though it is better than both its predecessor and successor. Even though Moore was quite committed and plays a good first Bond (regardless of the extremely poor introduction), the fighting scenes follow the classic Moore manner and the pre-title sequence is the worst in the series. With John Barry unavailable to do the music he recommended his friend George Martin, who makes a solid work (although not anywhere near Barry or Arnold), even though the title song is far from being the masterpiece that so many others like to claim. The fact that Sir Paul is singing does not automatically make it the best song in the Bond history.

New York still feels like unexploited territory for Bond, but since so many other films have taken place there and so much has happened, it is questionable if there is anything left for Bond to do there.
Upplagd av R. Sterling kl. 19:33 No comments:

The jewelry sir, is, if you forgive the analogy, only the tip of the tentacle...


In Octopussy Bond travels from India to West Germany in pursuit of Octopussy's circus. The circus will give its next performance in Karl Marx Stadt and Bond meets with M in West Berlin to get some new ID in order to get into East Germany. In the film they are traveling down the boulevard Kurfürstendamm, the famous shopping street in Berlin and the city's answer to Champs-Élysées. The U-bahn station 'Kurfürstendamm' is seen as Bond and M drive past it in their Mercedes.

"-We've confirmed that Octopussy's circus was in East Berlin when 009 was killed. Karl Marx Stadt is further east." 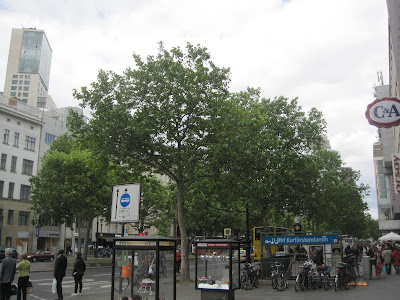 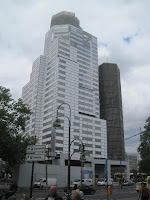 Seen very briefly in the background, at the end of Kurfürstendamm, is The Kaiser Wilhelm Church. The original church, built in the 1890's, was badly damaged during the war and the present church was built between 1959 and 1963 even though some details of the old church still remain. At the time of my visit in 2012 the church was being renovated and completely covered in scaffolds. It looked more like an office building and was quite easy to miss. The Germans always do things properly. It was only the separate bell tower with the attached chapel that was recognizable.


After driving down Kurfürstendamm they turn right and end up at the border crossing, Checkpoint Charlie. This was probably the most famous border crossing between East and West Berlin. This is of course a factual error since Checkpoint Charlie is located in the opposite direction and on the other side of town. Maybe they had been driving around for a while before ending up at the border... 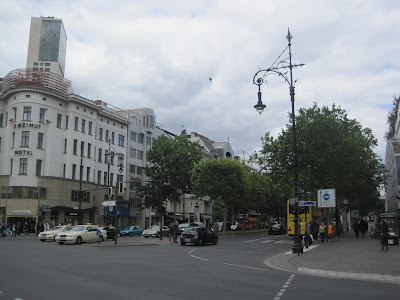 Kurfürstendamm and the church still looks much like in the film even though the boulevard has seen a lot of new houses. The U-bahn station and the church makes the exact spot of Bond's car possible to determine.
Upplagd av R. Sterling kl. 01:31 1 comment: