Some of the posts in the travel section featuring Bond's airlines of choice are often the most popular, and they are also very fun to write. So, to celebrate the week-end I give you an airline from the 60's. Goldfinger is flying to Genève with British United Air Ferries in 1964 along with his golden Rolls Royce. Bond gets on the next plane and shadows Goldfinger across Switzerland. 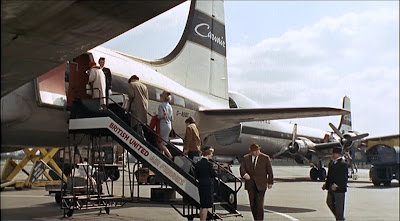 Crossing the channel from England by sea was usually a time consuming business and that is why the so called ''air ferries'' emerged in the 40's and 50's. They transported cars and their owners across the channel to various parts of the continent. Bond and Goldfinger are flying from "London Southend airport" at Southend-on-Sea.
The reason why British United Air Ferries was Goldfinger's choice for airline shows the amazing details and quality that went into the earlier Bond films and the producers efforts to be as faithful as possible to the original novel. In the novel, Bond is told that Goldfinger will fly with Silver City Airways across the channel. Silver City was an airline that was in operation when Fleming wrote Goldfinger in 1958 and obviously something that the filmmakers wanted to use in the film. But the problem was that this airline had ceased operations in 1963, and was not avaliable for the film. But they had merged with Channel Air Bridge to form the new airline: British United Air Ferries! So it is in a way Fleming's ultimate choice that was used in the film. 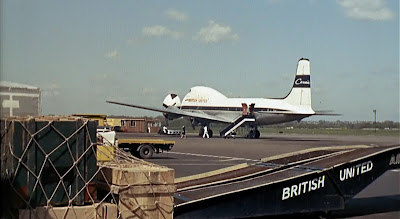 The plane that looks similar to a Boeing 747 is in fact an Aviation Traders ATL-98 Carvair, a model that was based on the Douglas DC-4. 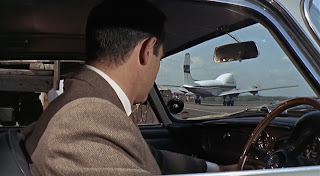 Loaded at the front it had a capacity of 3-5 cars and approx. 25-50 passengers. The plane was developed by Aviation Traders (Engineering) Limited - ATL, and the name Carvair was derived from car-via-air.

One of the first planes originally used by Silver City Airways, the Bristol freighter, had a capacity of 1-2 cars and rather high operating costs, for example if a booked car failed to show up. And as the traffic increased so did the length of British cars and the demands for new planes. The Bristol freighter/superfreighter with its limited payload proved to be inadequate in the late 50's. That's when the converting of the DC-4 proved to be a relatively inexpensive solution. In the mid 70's the Carvair planes were transferred for cargo flying and on 1 January 1977 the airline operated its last car ferry service. Following several name changes (British Air Ferries and British World Airways) and ownership changes, the airline went out of business in December 2001, following the post 9/11 downturn.

A short documentary from 1963 shows the loading and taking off of a British United Air Ferries Carvair.

In Diamonds are forever Bond and Tiffany goes to Vegas. Bond is trying to find out who is collecting the diamonds and the multimillionaire, Willard Whyte, turns out to be of certain interest. Bond decides to take a show at his Casino "The Whyte House". For the exterior shots of the Whyte House, the Las Vegas Hilton was used. The tall building behind the original Hilton was edited in by the filmmakers, to make the entire complex look bigger and did not exist.

In 1971 the surroundings of Las Vegas was still a desert and like everything else, even the Hilton was smaller. It has been expanded in two directions since the film with the east tower added in 1975 and the north tower added in 1978.

"Darling, why are we staying at the bridal suite at the Whyte House?"
-Tiffany Case to Bond-

The original hotel was built in 1969 an was originally named the 'International Hotel', the largest in the world at the time. Barbara Streisand was the opening night performer and it was on this hotel that Elvis had a record breaking 58 consecutive sold out shows, during a period of four weeks (breaking all previous Las Vegas attendance records). He would later break his own records in 1970 and again in 1972. When performing in Las Vegas he always stayed at the penthouse suite, room 3000, and did so until his last performance in December 1976.

The International Hotel was sold to Hilton Hotels Corporation in 1970 and was renamed the Las Vegas Hilton in 1971. During a number of mergers and splits in the late 90's and a sale in 2004 Hilton Worldwide terminated the franchise licence agreement with Las Vegas Hilton in 2011 and the name was changed to 'LVH-Las Vegas Hotel & Casino' in January 2012. But it still kept the initials from the time when it was Hilton property (LVH). Today, the hotel i called Westgate Las Vegas Resort & Casino.
The interior shots of 'the Whyte House' was filmed at 'the Riviera', where the cast and crew also stayed during the weeks of filming. In the film Bond is staying at the Hotel Tropicana and later in a suite at the Whyte House with Tiffany. Bond has never stayed at a Hilton hotel in the films, but in You only live twice, Bond is posing as Mr Fisher and informs Helga Brandt (as a cover) that he is staying at the Hilton in Tokyo.
Upplagd av R. Sterling kl. 00:59 1 comment:

In Tomorrow never dies, Bond and M are traveling through London, supposedly back to Mi6 after their meeting at the Ministry of defense. M's Daimler is escorted by police motorcycles, stopping the traffic from the intersecting streets. A very credible scene. The first view is picturing The Bank of England Museum and the Royal Exchange building, opposite 'Bank station'. 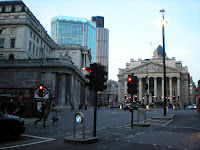 M's Daimler is coming in from Prince's street (to the left of the Bank of England) and continues down Poultry. A police motorcycle is stopping the traffic from Queen Victoria street. Bond and M are supposed to come from the Ministry of Defense which makes it strange that the car is driving past Bank station. Both the Ministry and Mi6 are situated far from this part of the city and the only reason must be that they wanted to picture a typical "London view". Either that or create the conception that the Ministry of Defense is the building that really is the Bank of England. 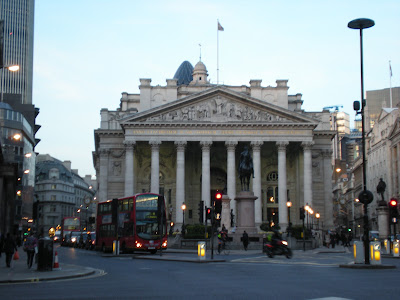 "The Gherkin" is seen in the background behind the Royal Exchange building. This iconic building was completed in 2003, hence it is not visible in Tomorrow, 1997. It is a very short scene in the film and a trip to Bank station just to get the view is probably not worth the trouble. But a good idea is that you start at the Bank and walk down Queen Victoria, because eventually you will get to The College of Arms, which of course is a must see location when one is in London.
Upplagd av R. Sterling kl. 23:37 No comments: 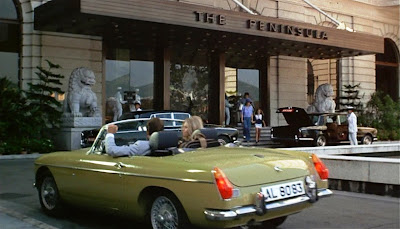 In The man with the golden gun 1974, Bond follows Andrea Anders from Macau in order to track down Francisco Scaramanga. Bond ends up in Hong Kong where Miss Anders is picked up by a green Rolls Royce at the Macau ferry terminal and Agent Mary Goodnight arrives just in time to save Bond a taxi fare. 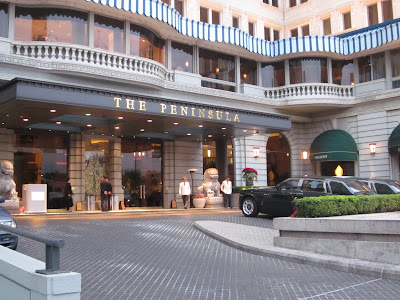 Goodnight informs Bond that all the green Rolls Royces belongs to The Peninsula Hotel. Famous for being one of the best hotels in the world, The Peninsula's reputation is not exaggerated! The service is beyond imagniation and the interior is more luxurious than the first class section aboard the Titanic.

"-A green Rolls Royce! There can't be that many in Hong Kong."
-Bond to Goodnight-

The entrance is still recognizable, although renovated with a small parking lot for three of their Rolls Royces. The front of the hotel is only seen very briefly thanks to the tedious filming by director Guy Hamilton and the full exterior is never seen in the film. Like all of Hamilton's films, the places, cities and surroundings are not depicted very glamorous or interesting, hence the hotel is here to be experienced without any previous expectations. 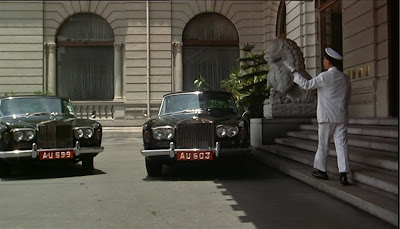 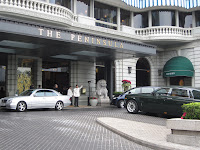 Miss Anders is staying at The Peninsula before giving the golden bullets to Scaramanga. Bond is informed that she occupies room 602 and he drops in with a bottle of Dom Perignon champagne. The interior scenes, including Miss Anders' suite and the hallway on the sixth floor, were most likely shot in the studios at Pinewood.

During the weeks of filming in Hong Kong, the cast (Sir Roger, Christopher Lee, Maud Adams, Britt Ekland and Hervé Villechaize) and parts of the crew (including director Guy Hamilton and Albert R Broccoli) stayed at The Peninsula. Something that must have suited Sir Roger excellent. 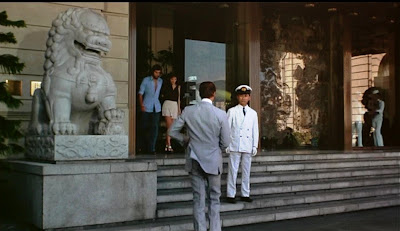 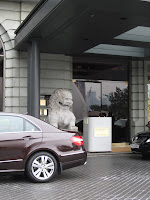 Just like in the film, The Peninsula keeps a fleet of 14 Rolls Royce Phantoms (all painted in the distinctive color "Peninsula green") ready to drive guests to the airport or on a sightseeing tour around town. The cars can be hired by others than guests and the cost for a one hour tour is HK$ 1500. As a guest you can book a car for a one-way transfer to Hong Kong airport. The cost is included in the rate for some of the rooms. When the hotel ordered 14 new Rolls Royce Phantoms (to replace their older fleet of Rolls Royce Silver Spurs in 2006) it was the largest order placed for Rolls Royce in the history of the company. 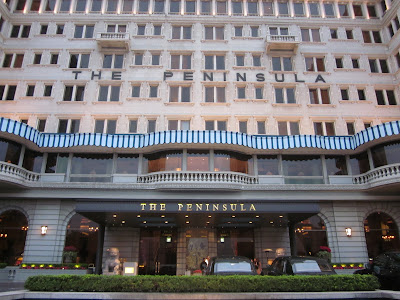 The hotel was opened in 1928 and has had a fascinating history ever since. For instance when the British surrendered Hong Kong to the Japanese in 1941 the surrendering documents were signed at The Peninsula. It is also fair to assume that almost every important person from the Empire that has ever visited Hong Kong have stayed here for at least one night, or have had afternoon tea in the lobby. The lobby still serves traditional English-style Afternoon tea between 2 p.m.-6 p.m., reminiscent of Hong Kong's colonial era. Later I will cover the experience of "a night at The Peninsula".