In The World is Not Enough 1999, Bond and Christmas Jones take a well deserved break after saving Istanbul from being destroyed in a nuclear meltdown. In one of the last scenes they are celebrating what appears to be new years eve on a rooftop in Istanbul overlooking the Bosporus. Later that evening they retire to Bond's hotel suite. This has probably been one of the least known locations in Istanbul until now.

M and the staff soon realises, thanks to the satellite's thermal image, that Bond has gotten to bed with Dr Jones and Q loyally shuts off the computer, claiming it must be a premature form of the millennium bug before M can get anymore details. The house where Mi6 finds Bond is actually a hotel in the oldest part of Istanbul.

Bond's hotel can namely be found at the intersection of Tevfikhane Sokak and Utangaç Sokak. This is the Seven Hills Hotel, a high class, four star hotel in the middle of the Sulthanamet district, close by the Hagia Sophia and the Blue Mosque located at Tevfikhane Sokak No 8. The distinctive shape of the building is easily recognizable. 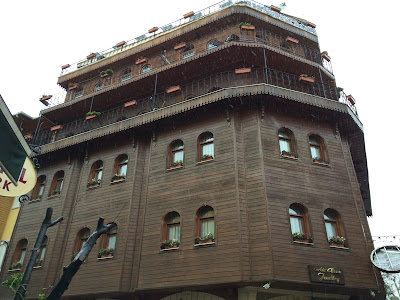 Which room Bond is staying in, will probably be possible to determine if you would stay at the hotel. Until then, we have to settle for the fact that it probably is on a high floor. 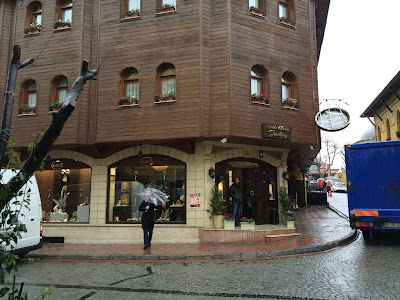 The hotel has a rooftop restaurant that probably modeled for the place where Bond and Dr Jones have their champagne, as seen in the top picture in this post, even though that scene in all likelihood were shot somewhere in studio, probably not even in Istanbul. If Bond and Christmas had been on the real rooftop of the Seven Hills Restaurant, the director Michael Apted could have chosen to picture the magnificent Hagia Sophia instead. From the rooftop you actually see both the Blue Mosque and the Hagia Sophia. 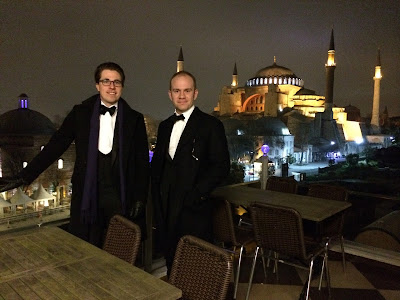 You find the hotel's website at www.sevenhillshotel.com.
If you do not intend to stay at the hotel, at least to have dinner at the restaurant is highly recommended. 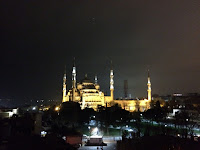 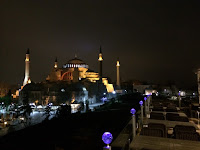 Email ThisBlogThis!Share to TwitterShare to FacebookShare to Pinterest
Etiketter: Istanbul - Turkey, The World is not Enough
Plats: Istanbul, İstanbul, Turkiet 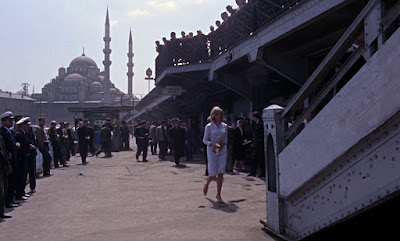 In From Russia With Love 1963, Tania walks through Istanbul to the Hagia Sophia, where she is supposed to deliver the blueprints of the Russian consulate to 007. On her way to the Hagia Sophia church she is followed by a Bulgar as she walks past a mosque in Sultanahmet, and she also walks up the stairs on the Galata Bridge. The film team had a lot of problems with crowd control, which becomes apparent when you see the crowd looking down on Tania from the bridge. 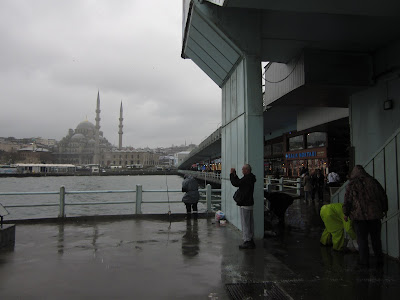 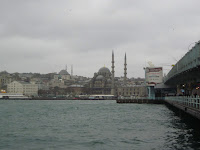 The Galata Bridge is perhaps the most famous bridge in Istanbul, which name probably is known to most people thanks to the football club based in Istanbul, Galatasaray. The bridge spans over the Golden Horn from the Eminönü district to Karaköy. The current bridge was completed in 1994 when the bridge seen in the film, originating from 1912, was damaged in a fire. However, the platform Tania walks on, can still be found in the middle of the bridge. The lower part of the bridge is filled with restaurants today, overlooking the Bosporus.

In the film, the Galata Bridge is shown twice. The second time in another establishing shot over Istanbul, seen in the picture below, just before Bond and Tania go on their boat ride on the Bosporus. 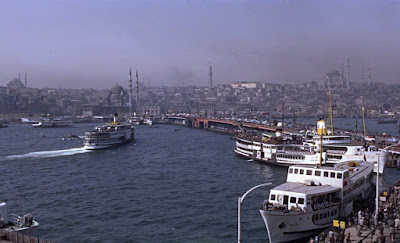 The Bosporus ferries are seen docking by the Galata bridge. You find the same view as in the film over Galata in the Beyoğlu district. The camera in the film was most likely placed somewhere on Rıhtım Caddesi to get the view seen in the picture above. 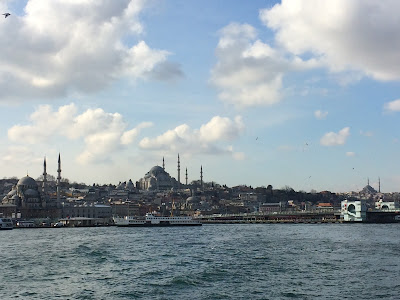 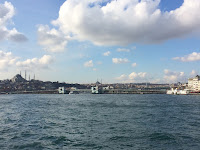 The mosque seen in the background behind Tania in the top picture, is the large Yeni Camii situated on the Golden Horn, right by the southern end of the bridge. Yeni Camii means the new mosque but the mosque was originally named Valide Sultan Mosque and dates back to the 1660's. This is one of the many famous architectural landmarks of Istanbul. The construction of the mosque had began already in 1597 and took more than half a century to complete. Part of the construction and connected to the mosque today is the famous spice market where a visit is highly recommended. 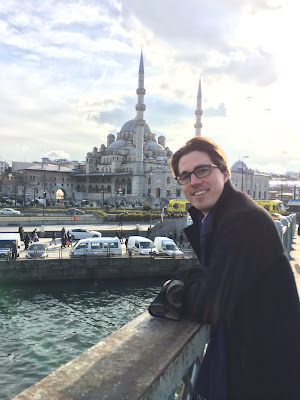 When Melina and Bond goes shopping in Corfu town in For Your Eyes Only 1981, they walk past a few famous tourist attractions in Corfu town, such as the Saint Spyridon church , covered earlier. However, they also stop briefly at what appears to be a small town square where two Greek men are performing a traditional Greek dance. 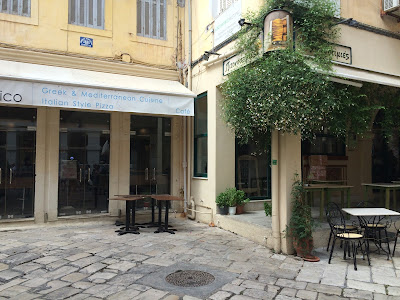 This is actually not a town square, but rather just a street crossing in front of a small church. This location can, not unexpectedly, be found almost in the middle of the city centre. If you walk down Nikiforou Theotoki, coming from Liston, you will find the place on your left after ca 200 meters. 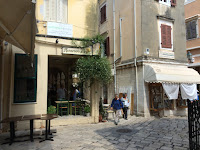 Bond and Melina stop for a few seconds to observe the Greek dance and then proceed to Pl. Leonida Vlachou and the Maitland rotunda. Today, you find a restaurant called Basilico facing the place where the Greek men danced. Not much else can be said about this small square other than that it is probably the least known Bond location in Corfu, only seen for a couple of seconds in the film. 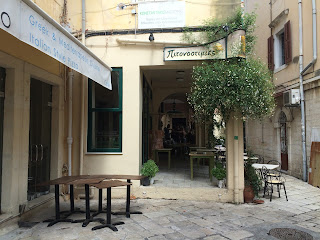