"It's all so boring here Margot. There's nothing but playboys and tennis pros. If only I could find a real man..."

The car chase in the pre-title sequence of The Living Daylights comes to an abrupt end when Bond steers the Land Rover towards a cliff on the rock of Gibraltar. As the car is falling into the sea with the assassin inside, Bond opens his parachute and escapes an explosion just before landing on a luxury yacht cruising in the strait of Gibraltar.

The Land Rover chase was filmed on several locations on the rock but the particular part that is seen through the windscreen of the car can be found at the Queen's Gate, or what is known today as Ape's Den, just above Prince Ferdinand's Battery. The Land Rover is coming down on Old Queen's road and crashes into the stone wall right by the Queen's Gate, which is an opening in Charles V wall. 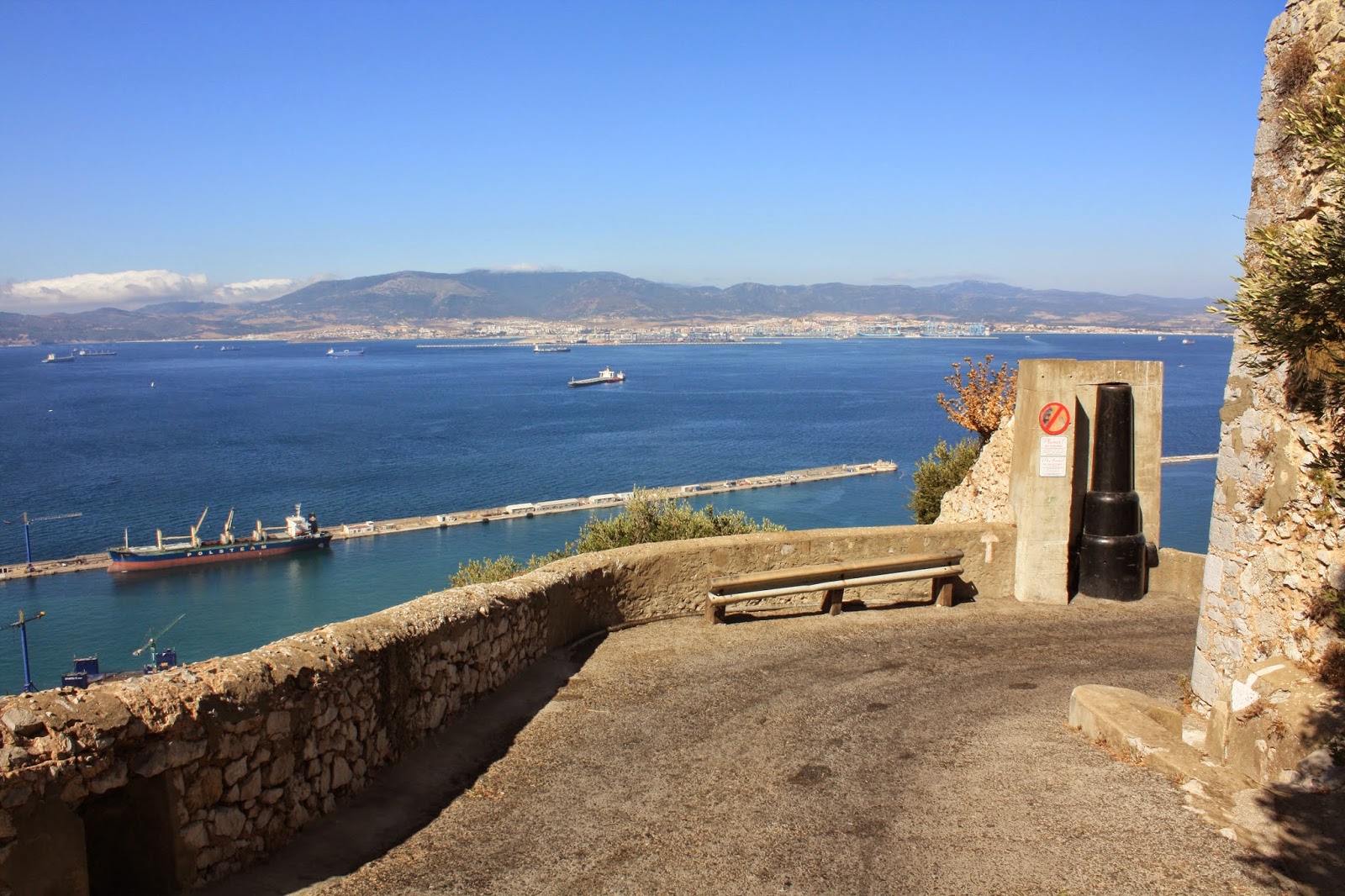 When driving down Queen's road in the nature reserve you should take a left and continue down Old Queen's road in order to get to this location. Queen's gate can be found after a few hundred meters from the street crossing. The road breaches through the last part of the great wall (named Charles V's wall) that runs from the top of the rock all the way down. Earlier in the chase, the Land Rover has driven through another opening of Charles V's wall, a few hundred meters up the rock. Just below the Queen's gate is Prince Ferdinand's Battery. The car running through the kiosk, scaring a number of tourists, was filmed on another location.

The Barber Macuaque apes, the top tourist attraction in Gibraltar, feature prominently in the film and one even jumps down and scares Bond as he finds the dead guard on top of the rock. They are locally known as Barbary apes despite actually being monkeys and the Macaques in Gibraltar is the only wild monkey population in the European continent.
The part of the wall where the two monkeys are watching the Land Rover is probably located somewhere along Queen's road or the Old Queen's road in the nature reserve.

The legend goes that as long as the monkeys exist on Gibraltar, the territory will remain under British rule.


With this post I will reach 200,000 page views since my blog inauguration in 2011. I thank all of you who enjoy this blog and follow me in the search for more Bond locations. Long live England! 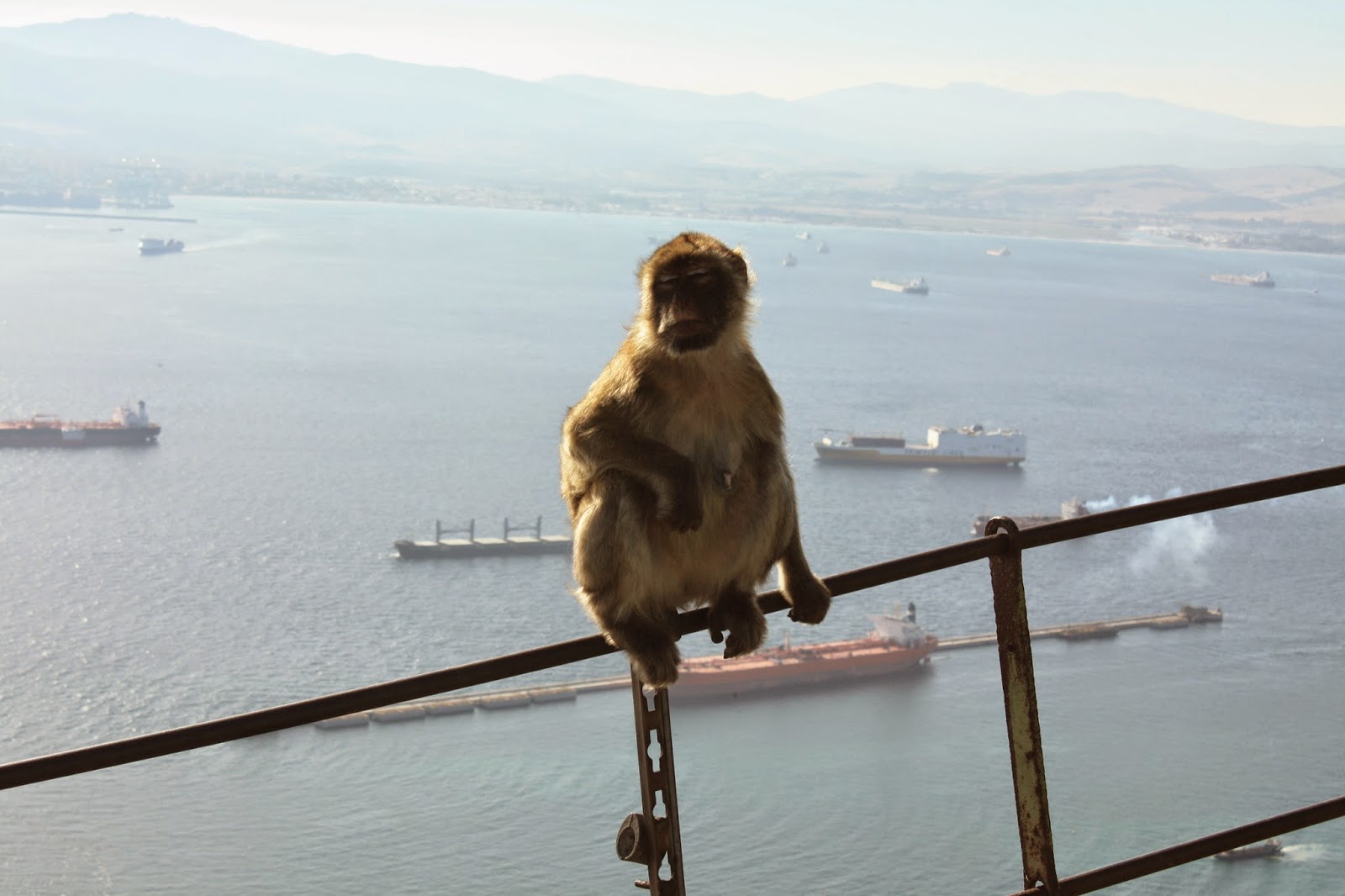 Summoned to the headmaster's study - No. 10 Trinity Square 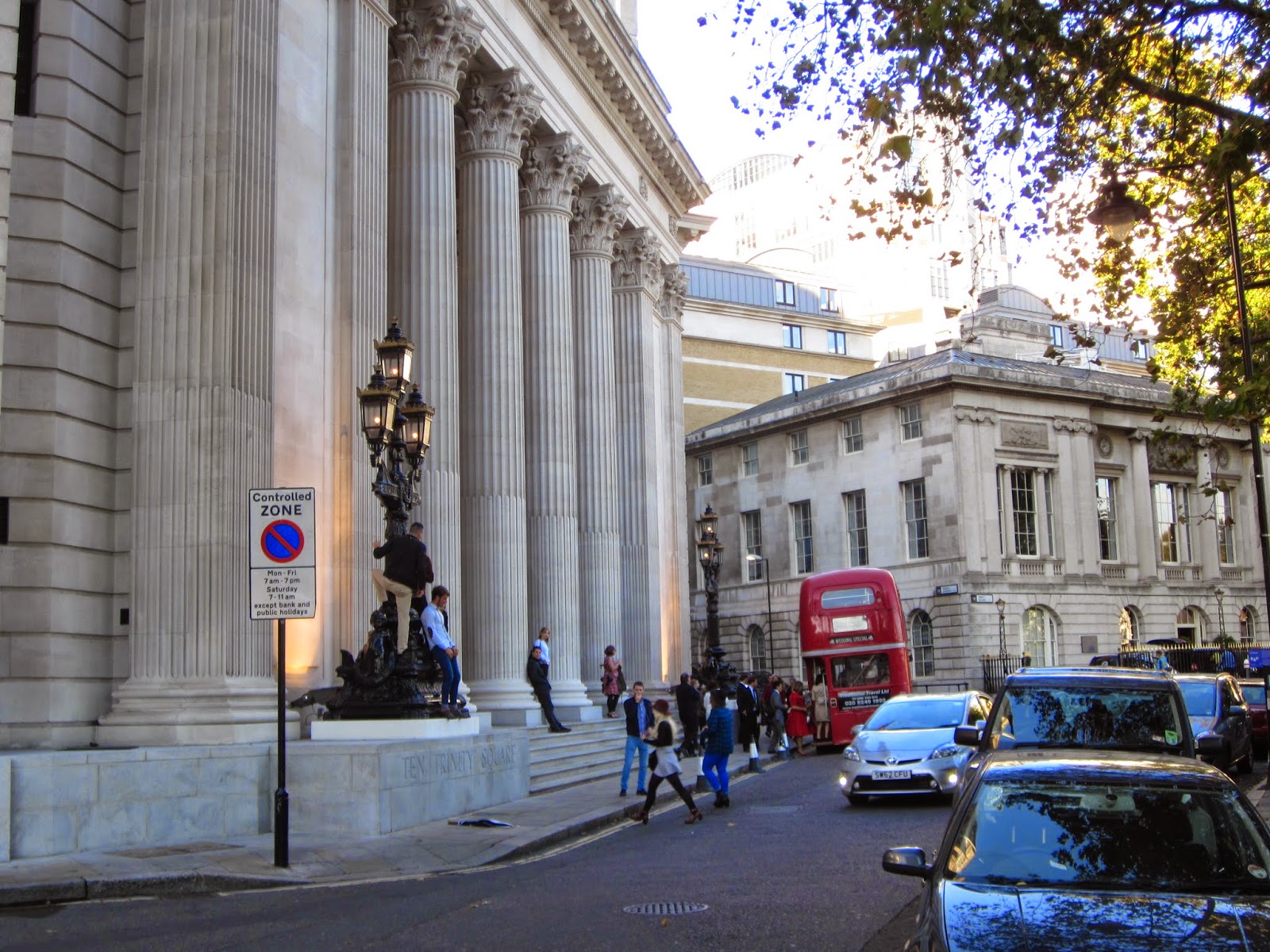 After the disaster in Turkey where Mi6 loses not only an agent but also the secret hard drive, M is summoned to the new chairman of the intelligence and security committee, Gareth Mallory. Mallory is planning M's early retirement and tells her she will be awarded a GCMG when she leaves. We get the impression that Mallory's office is located somewhere around Whitehall, but in fact, the action takes place in another part of town, very close to the Tower of London.

The building is in fact No. 10 Trinity Square, a building that formerly housed the Port of London Authority. It was also the European headquarters of insurance broker Willis Faber Ltd for some time during the late 1900's. Apparently, the building is about to be developed into hotel with over 40 private residences under the Four Seasons Hotels and Resorts brand, known as Four Seasons Hotel London at Ten Trinity Square. The hotel was due to open in 2014 but is apparently not yet up and running to my knowledge. 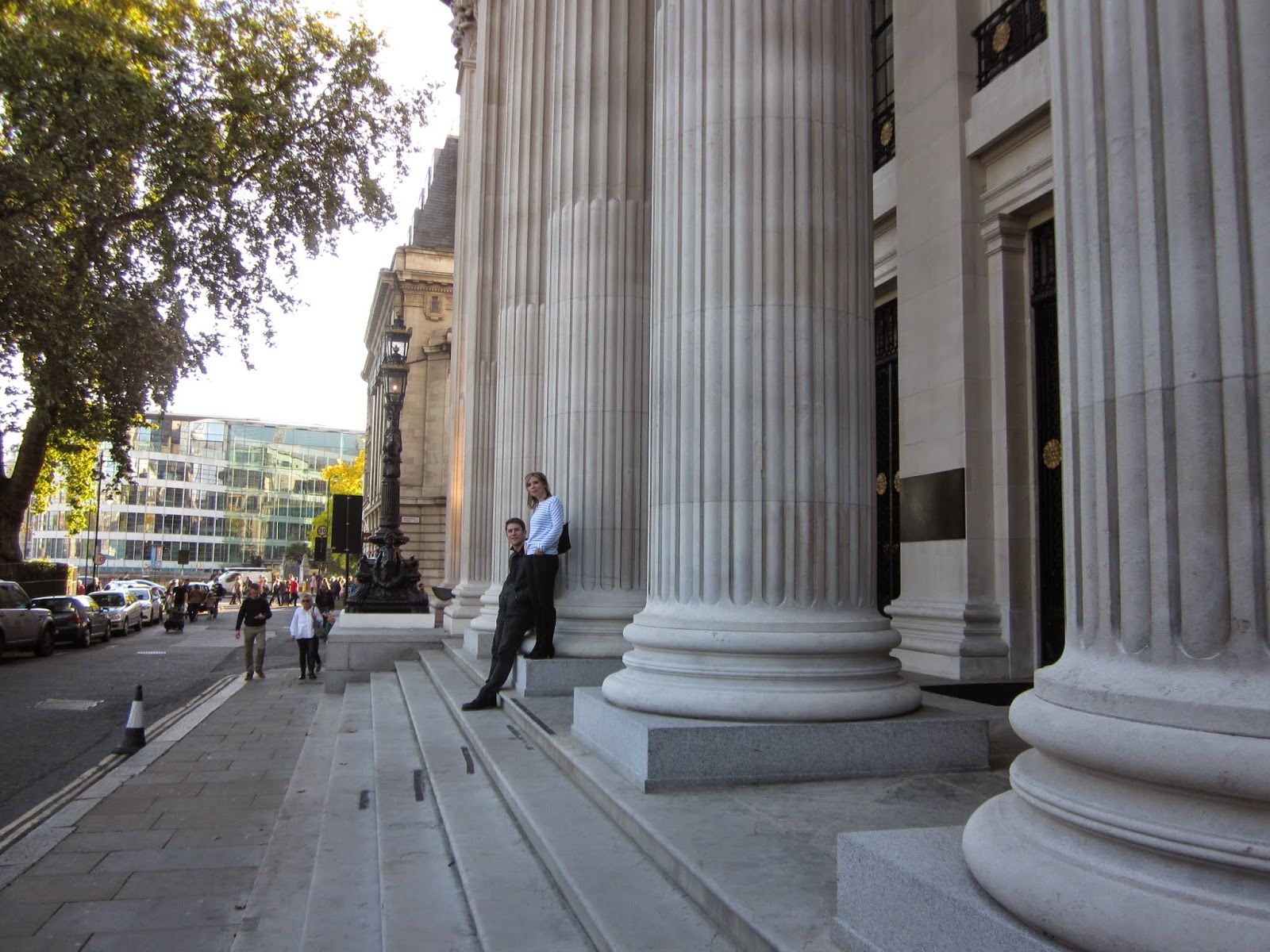 Despite being badly damaged during the Blitz, Trinity Square hosted the inaugural meeting of the General Assembly of the United Nations in 1946. M and Tanner arrive from the street Savage Gardens and park in front of the building. 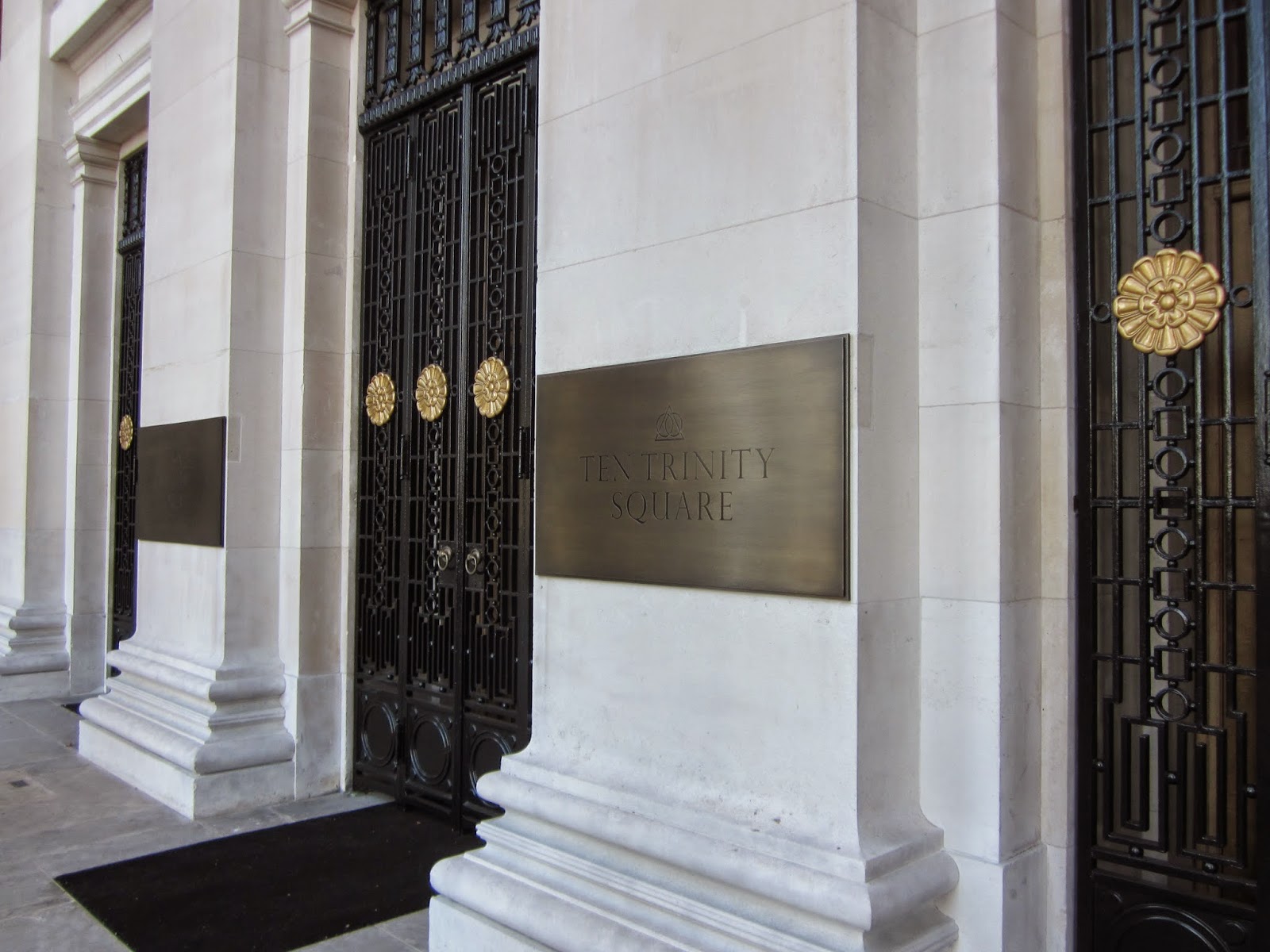 The building is a fairly late construction. It was built in 1922 after a design by Sir Edwin Cooper. It is facing Trinity Square Gardens and has a view over the Tower of London as well as the River Thames. 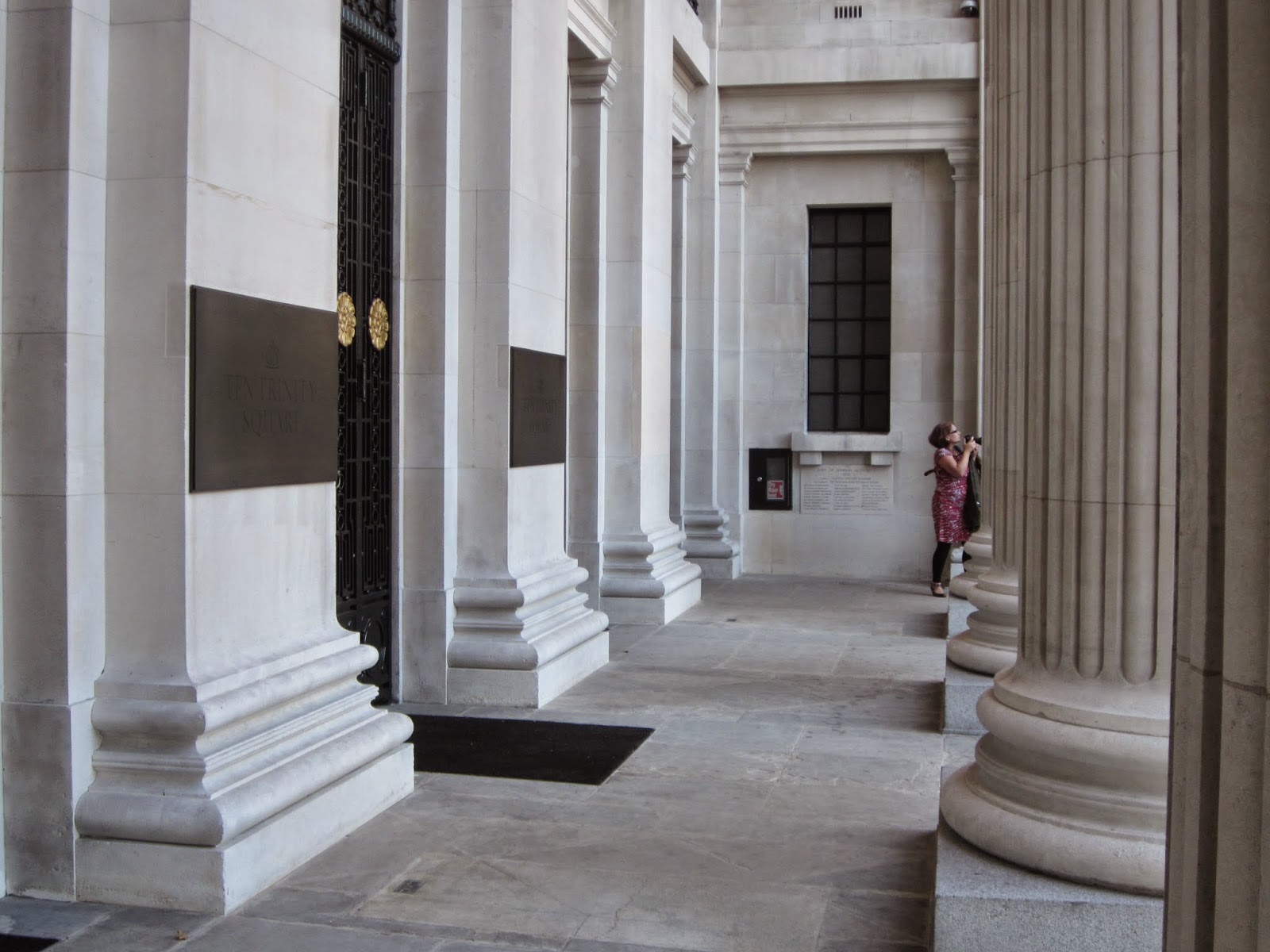 The GCMG that Mallory offers to M is an Order of chivalry, founded in 1818, by George the Prince Regent. It is awarded to men and women who render extraordinary or important non-military service in a foreign country. It is named in honour after two military saints, St Michael and St George. M is offered the highest class of the Order, namely Dame Grand Cross of St Michael and St George (GCMG). Bond himself is a Companion of the Order, which is the lowest of the three classes (CMG). 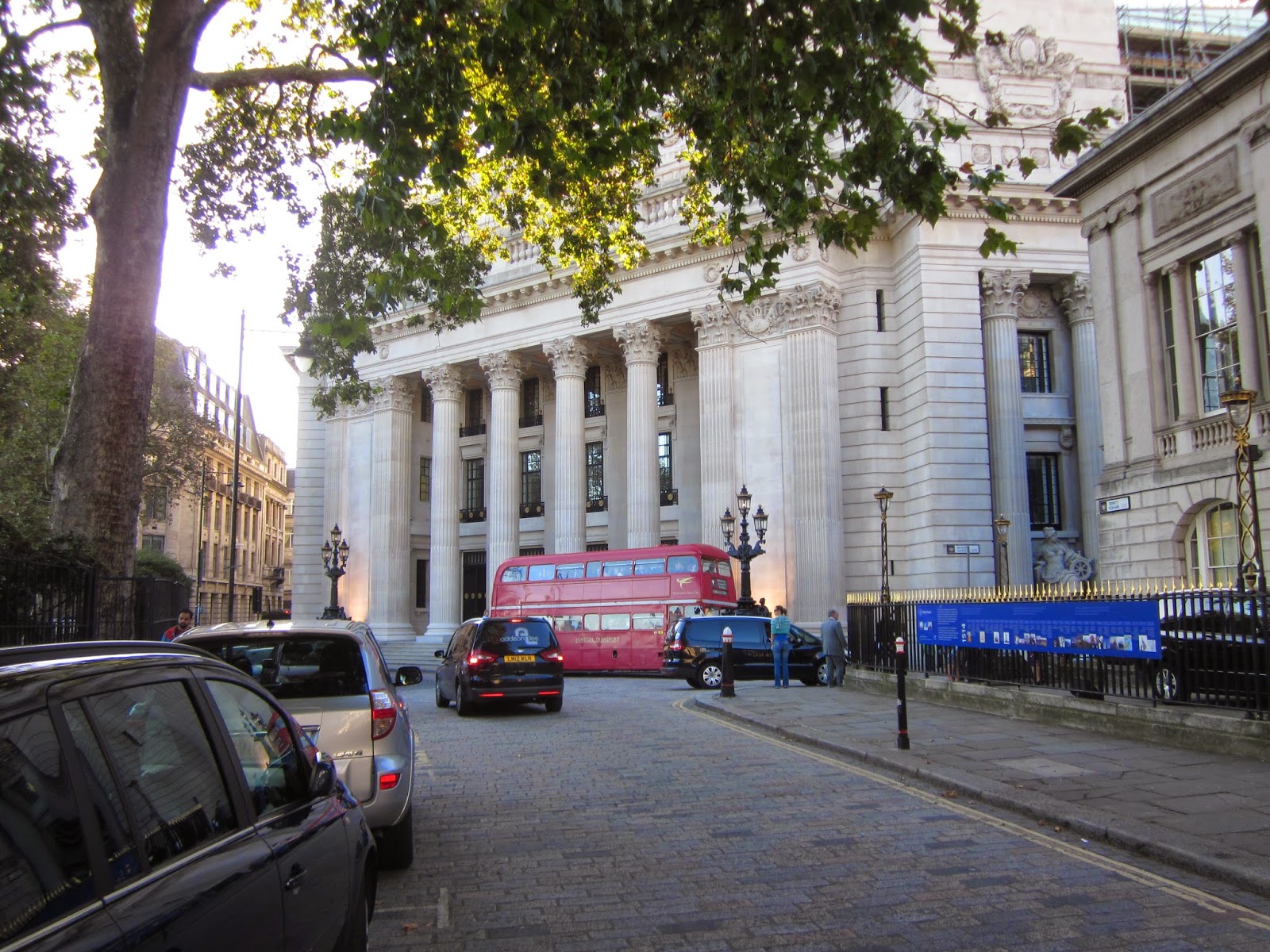 M, reluctant to retire from her position, leaves the Mallory's office and heads back to Mi6, only to watch it blow up from Vauxhall Bridge.

After walking down the sea promenade, Bond arrives at a cigar factory, supposedly located in old Havana. This is the cigar factory that belongs to Raoul, a sleeper agent stationed in Cuba. As I have written before, none of the Cuban scenes were filmed on location. Instead the filmmakers redid Cádiz in the southern part of Spain to look like Cuba. 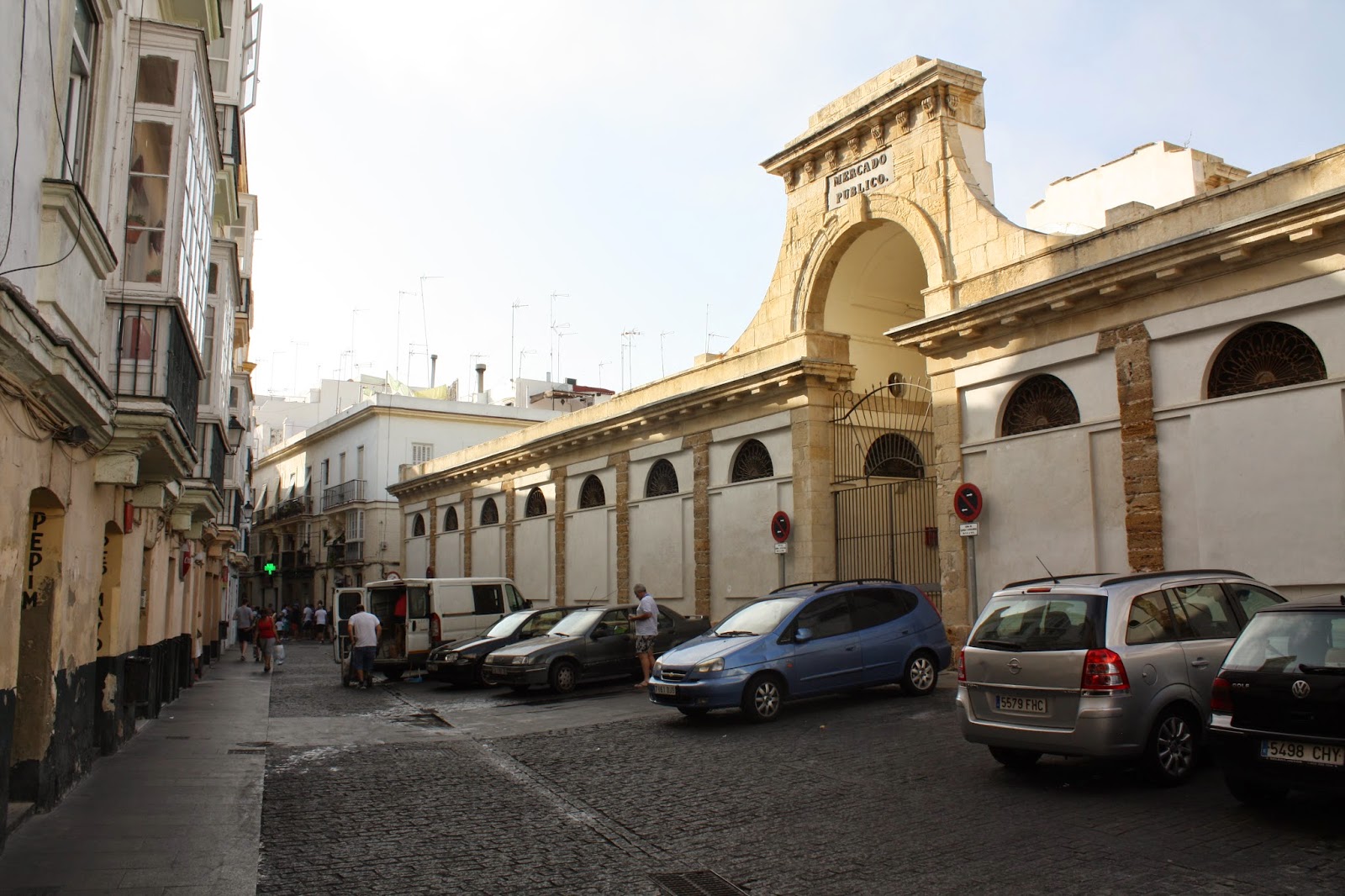 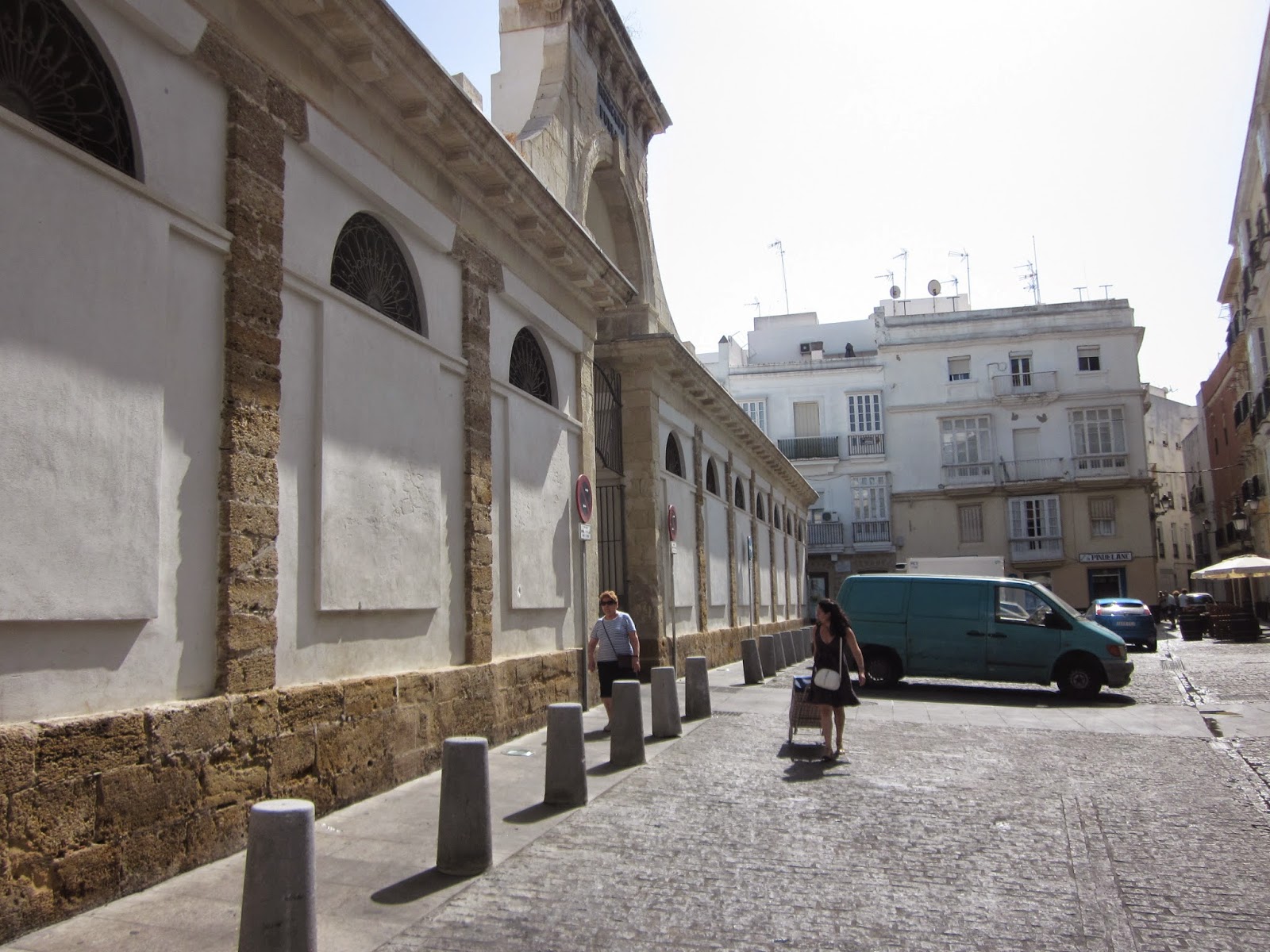 This scene was filmed in the old part of Cádiz. The street was brilliantly converted, and since Cádiz is one of the oldest port cities in the world, not much had to be done about the surrounding buildings. Raoul's cigar factory is actually a central market place, housing a lot of small shops, butchers and restaurants, called Mercado Central.

Calle Garaicoechea intersects with Calle Libertad, right in front of Mercado Central. Bond walks down Calle Garaicoechea and arrives at the factory, where he asks for Delectados cigars, actually a code for waking up the sleeping agent. 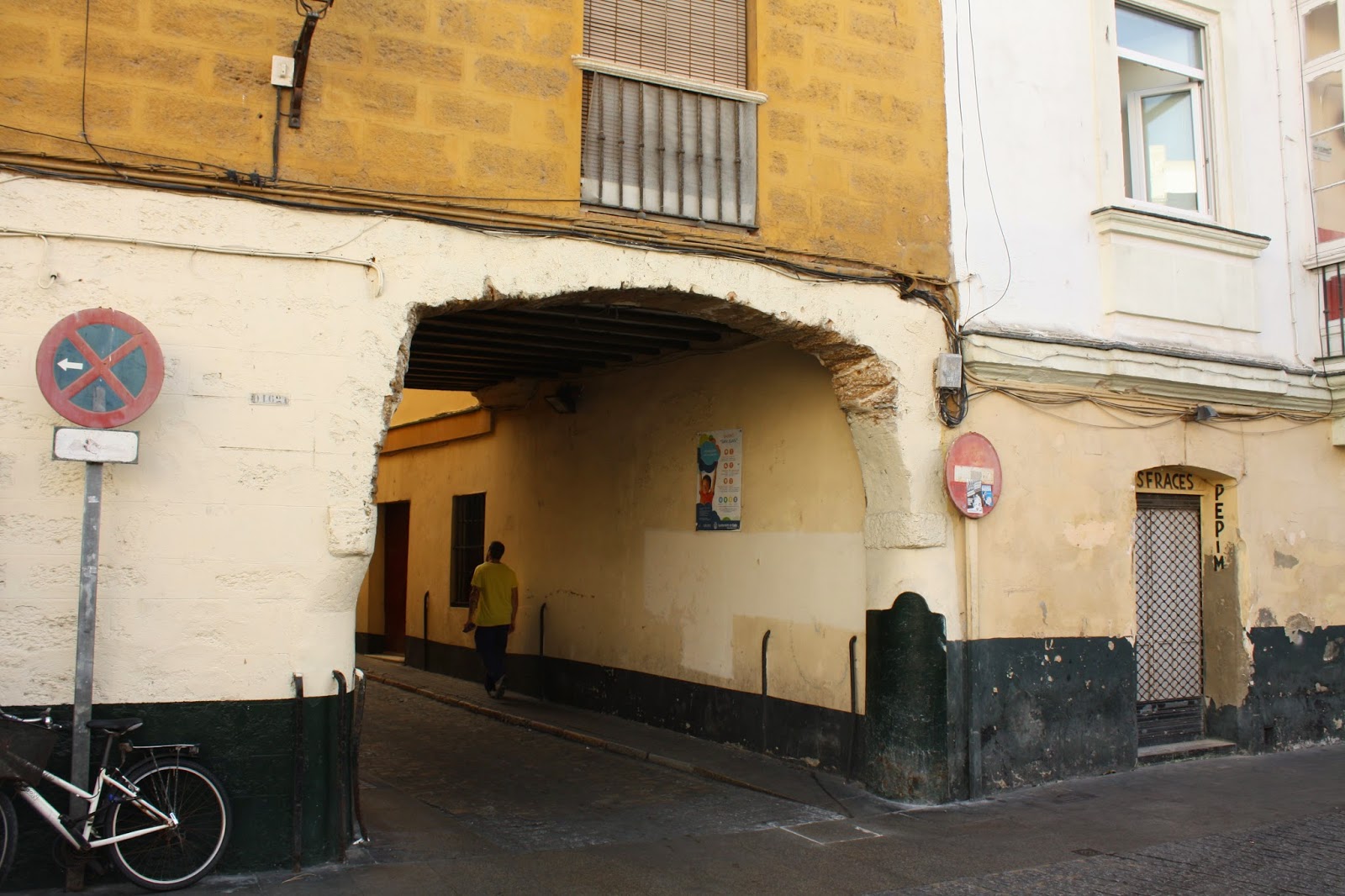 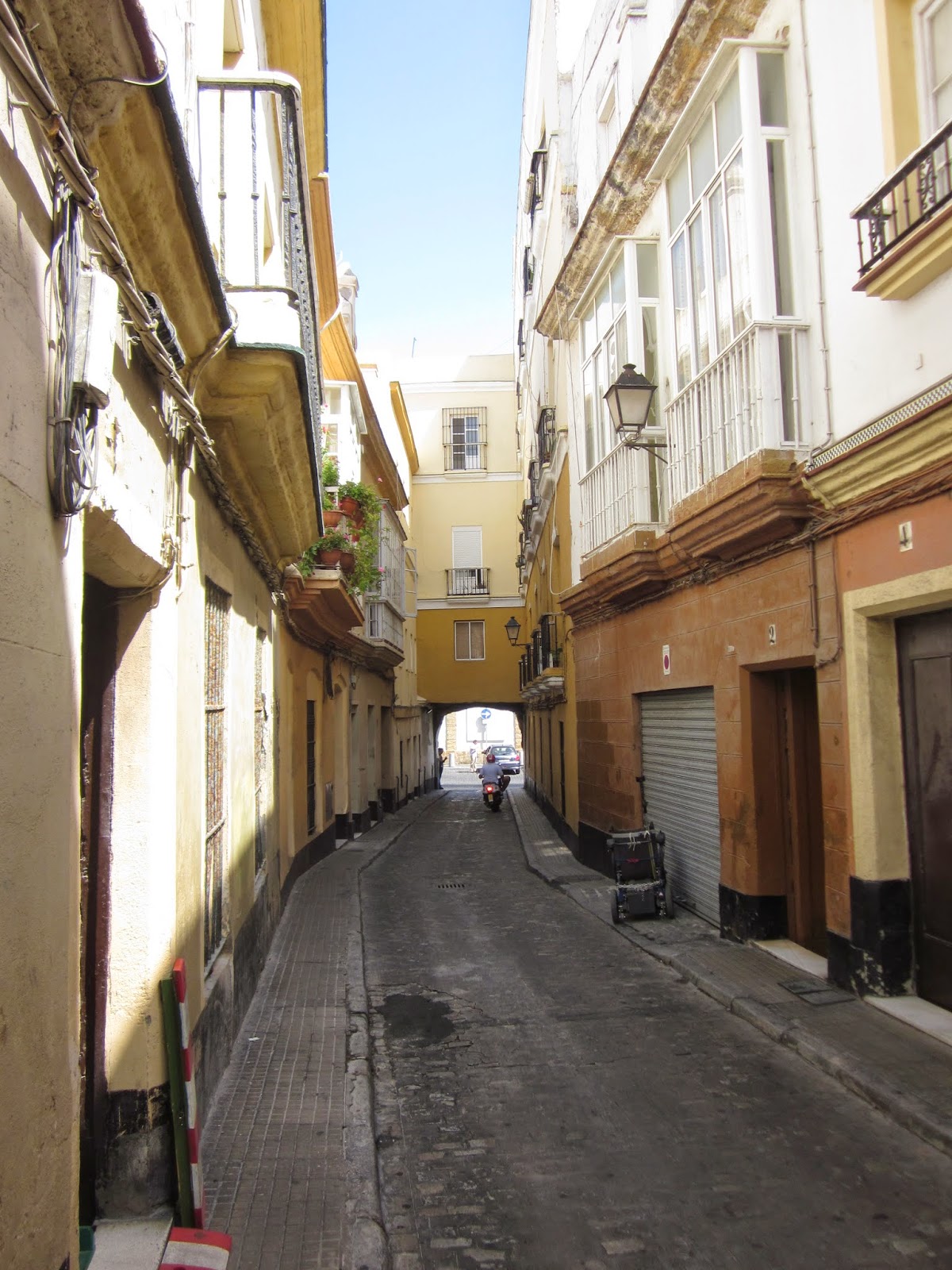 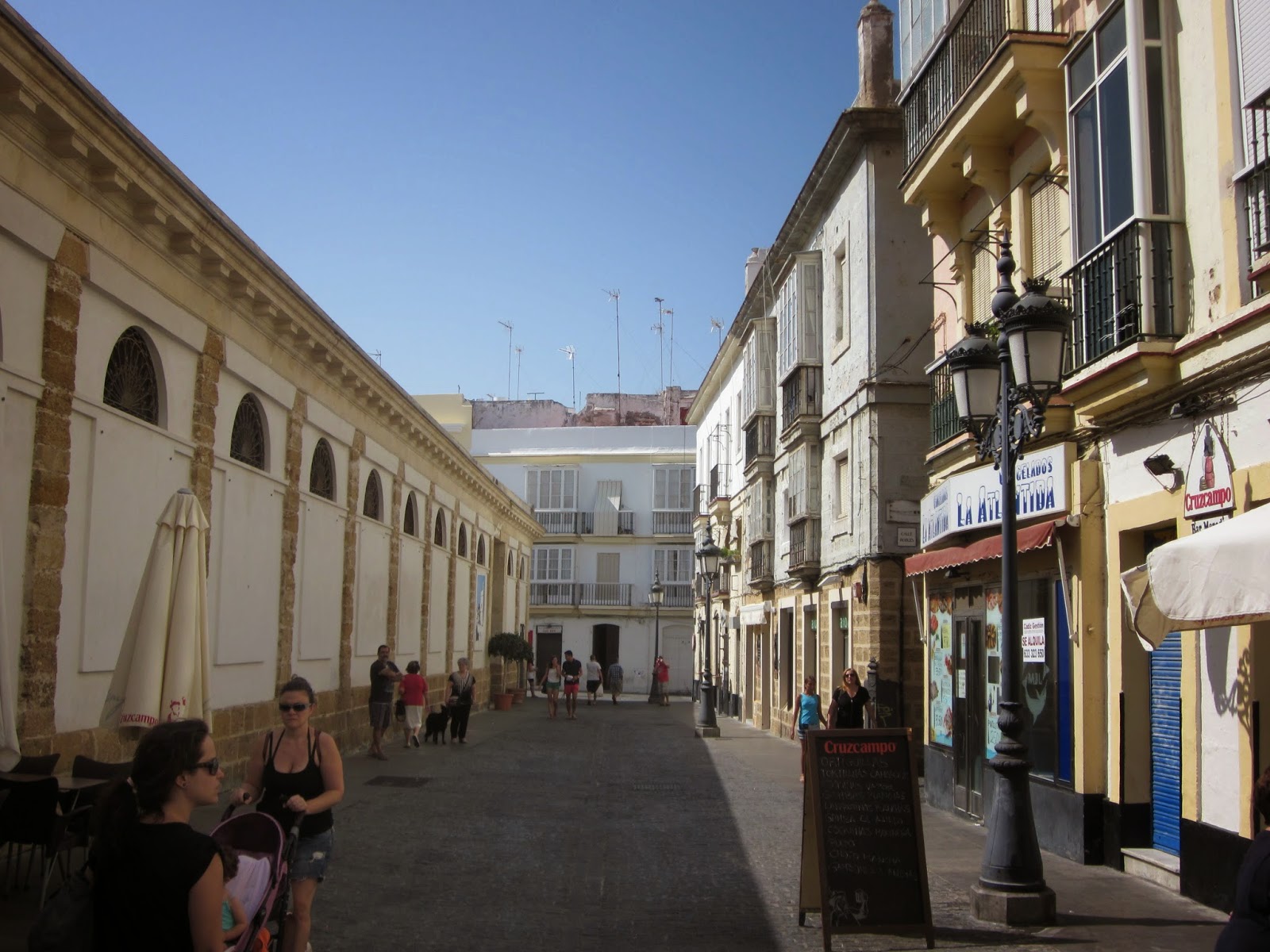 Mercado Central was built in the 1830's and is apparently the oldest covered food market in Spain. The building is neoclassical and the other three sides look the same as where Bond enters. The opening hours are a bit irregular, but despite the sign stating the opening hours between 10.00 and 18.00, chances are it will be open in the evening. The interior scenes of the cigar factory was naturally shot in studio.

"I'm here to pick up some Delectados." 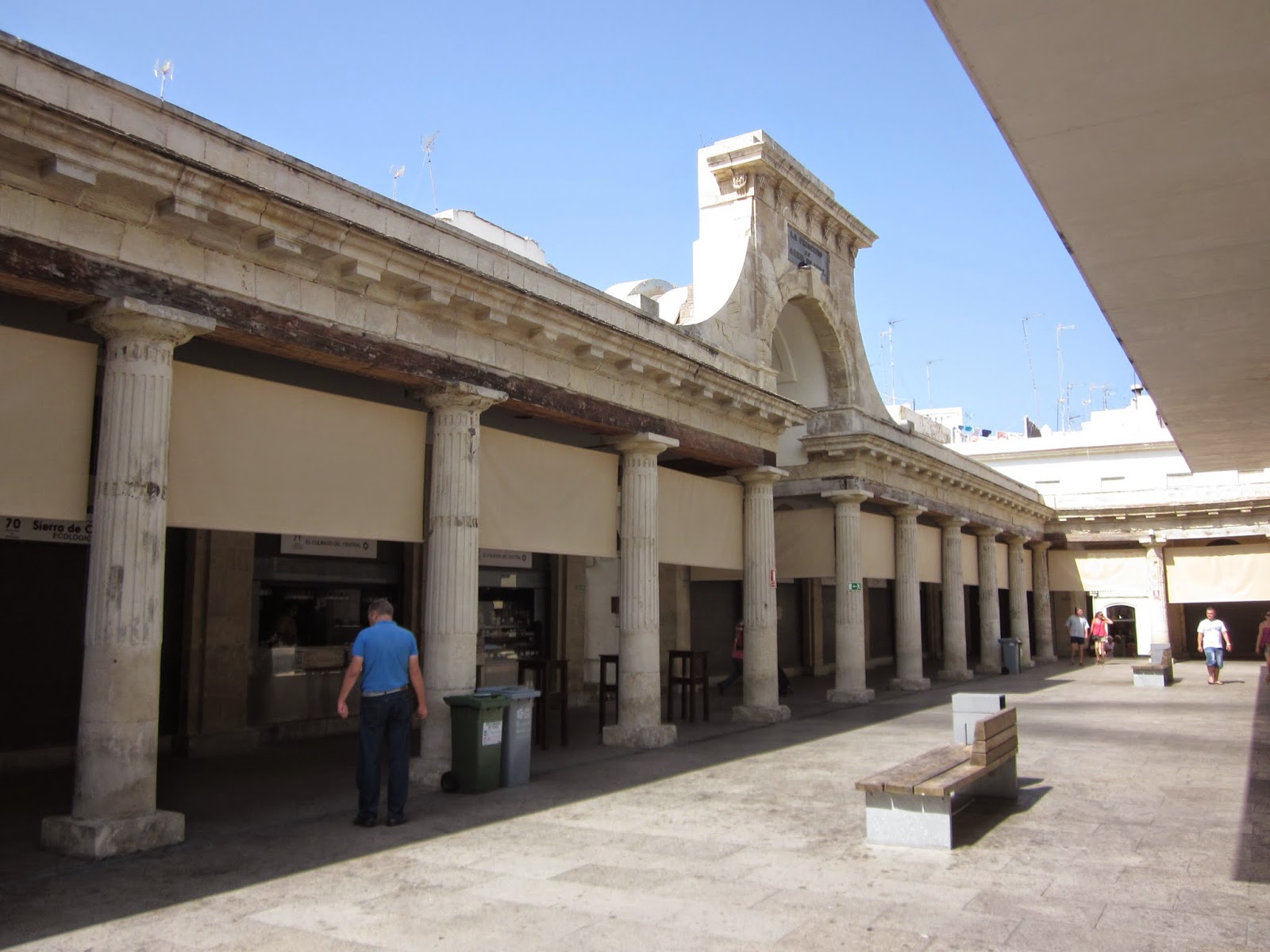 The arc on the facade seen from the inside of Mercado Central. In between the pillars you find small shops and delicatessens. Here you find local delights and, naturally, a visit is highly recommended.

Raoul's right hand man, played by Joaquín Martínez, escorts Bond through the factory and up on the roof where Raoul receives Bond. The roof scene was filmed next to the Cádiz cathedral which is actually located a few minutes walk from the "cigar factory". 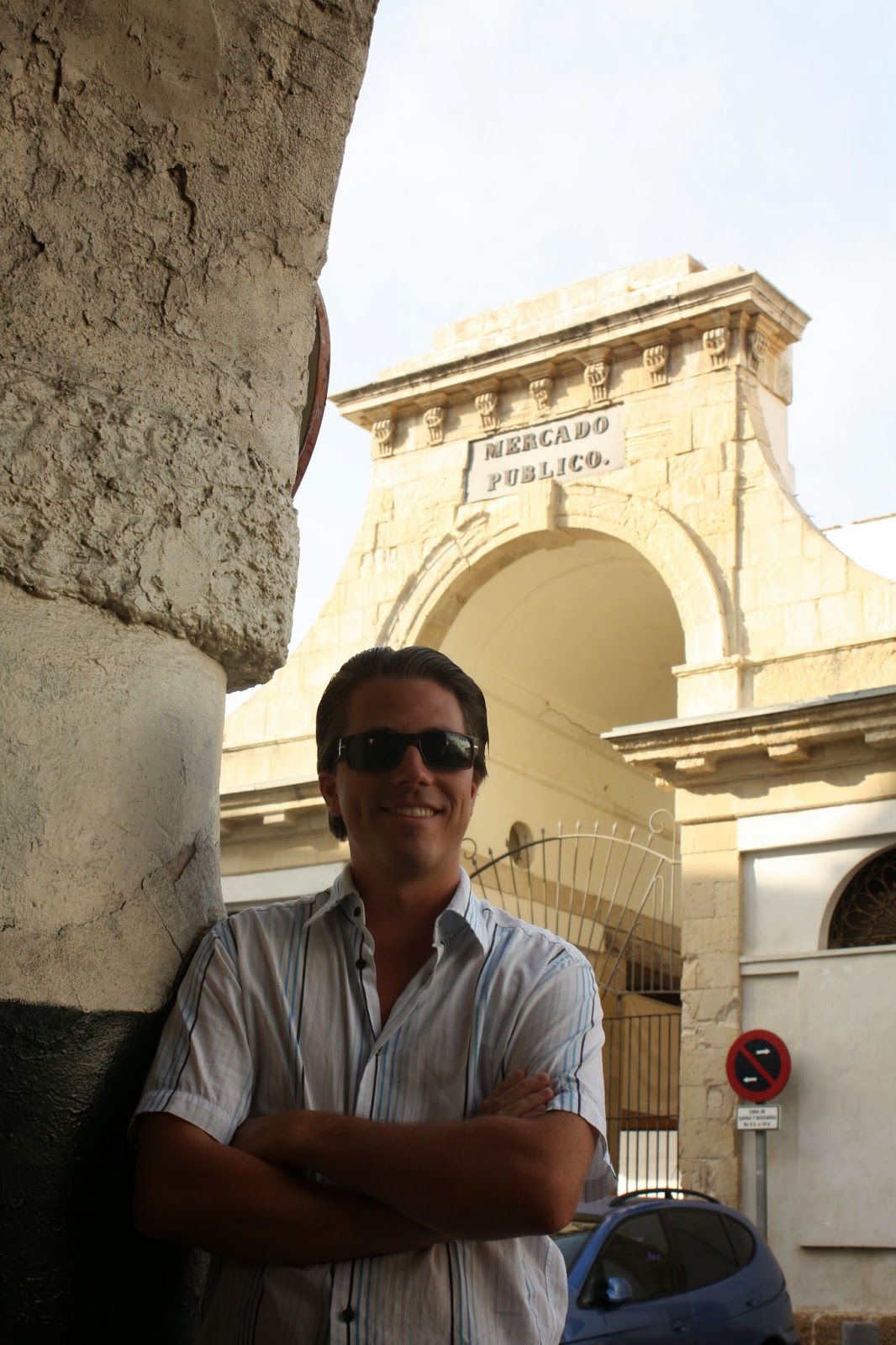 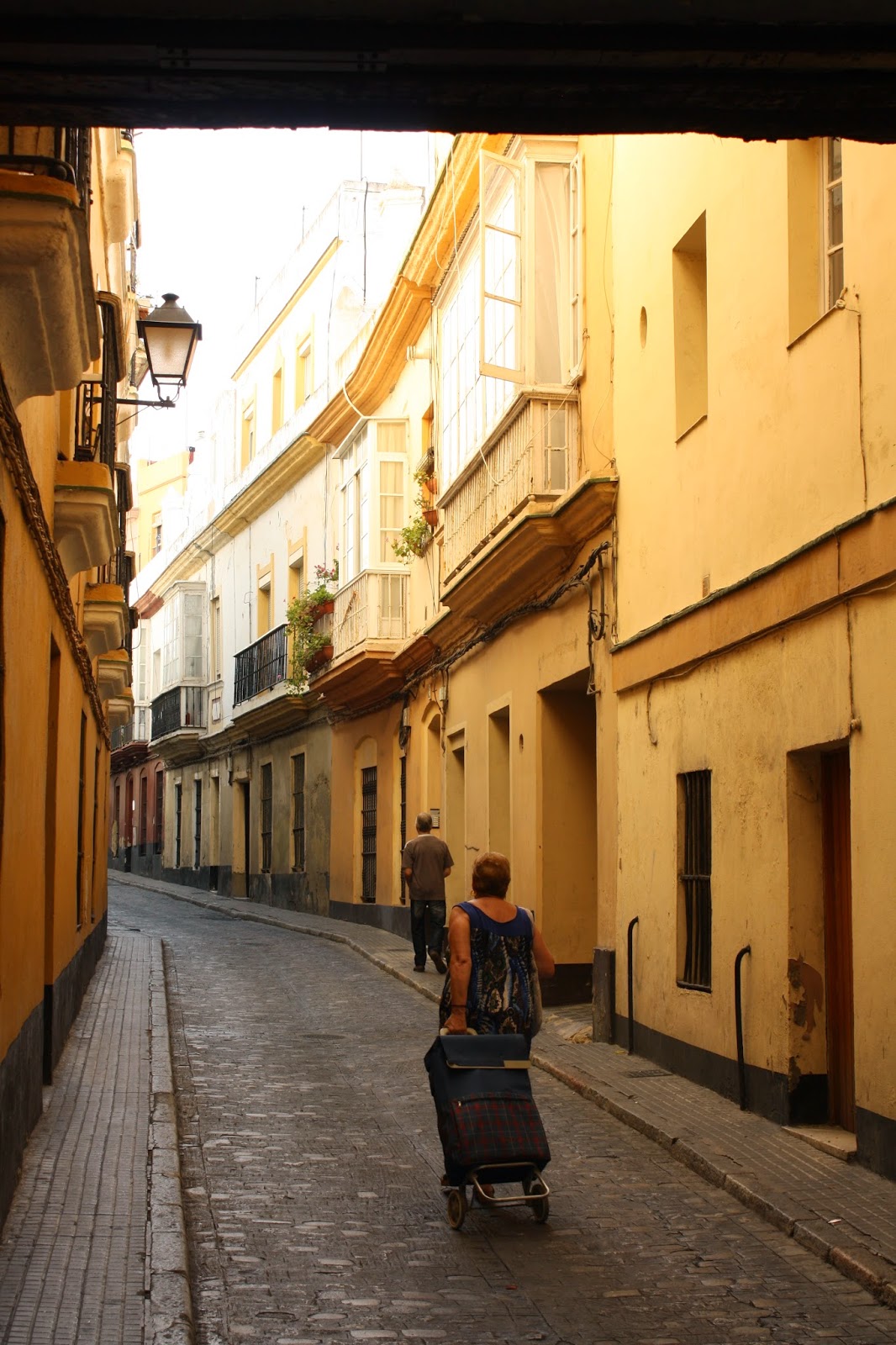 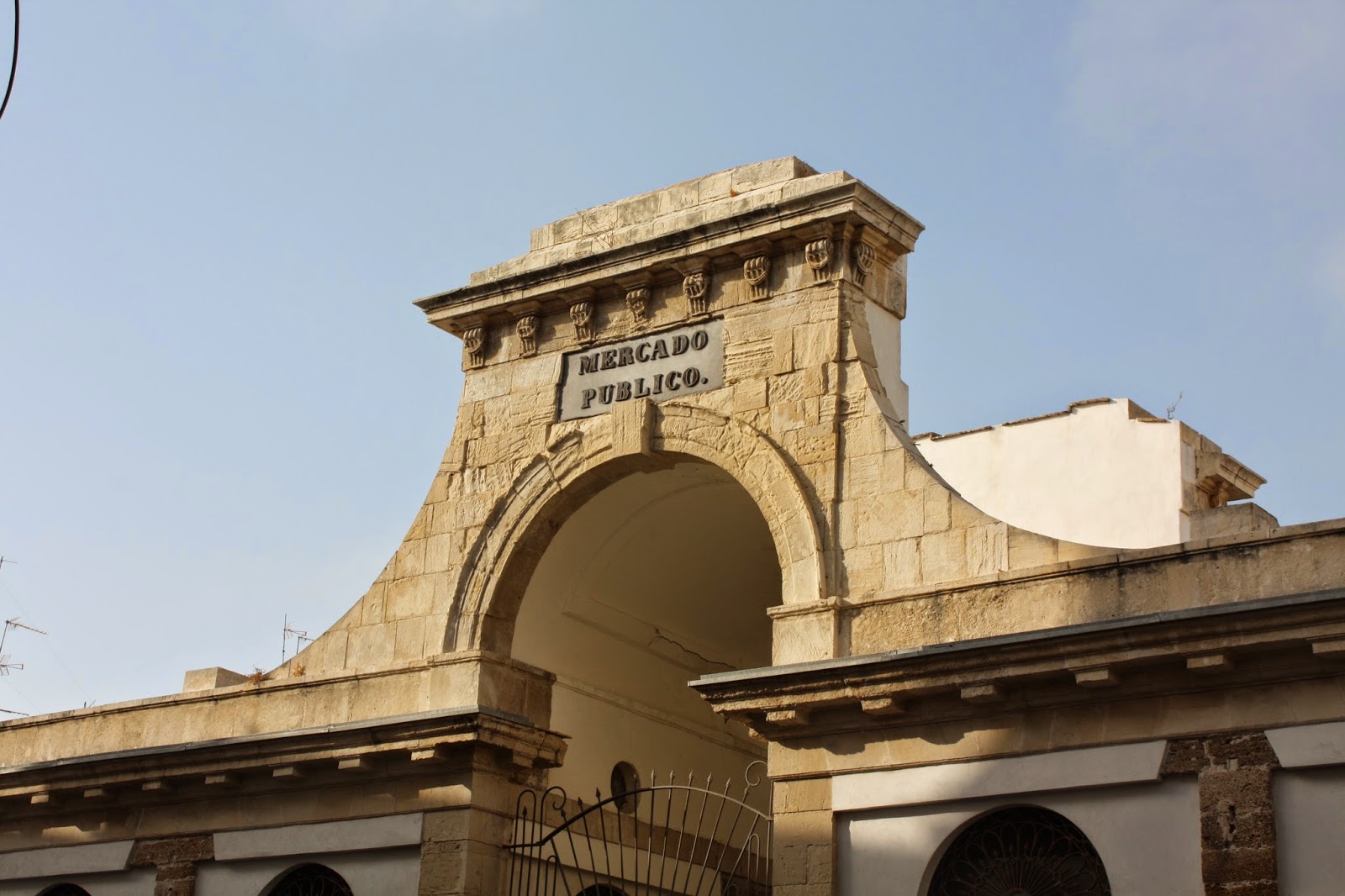