In For your eyes only Bond and Melina escapes from Gonzales' villa in her rented Citroën 2CV after Q's burglar protection has proven to be a little over efficient in Bond's Lotus. Gonzales' loyal guards takes pursuit in two black Peugeot 504 around the "Spanish" countryside. Like all the scenes "outside Madrid" the car chase was filmed in Corfu, Greece. 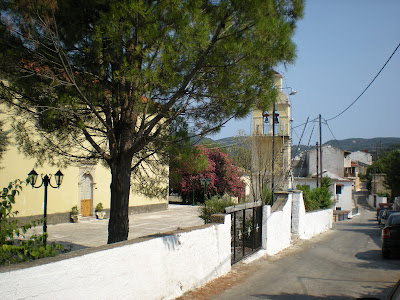 After a short chase through the curved roads they drive into a small village. This is one of Corfu's absolutely best kept secrets and a hidden gem when it comes to Bond locations. The small town of Pagi, situated in the north-western part of Corfu was the location for the delightful car stunt where Melina flips the Citroën over at the crossroad. The roads and the olive fields surrounding Pagi were used for the following car chase were one of the Peugeot cars finally ends up in a tree.

Bond and Melina are coming in from the east side of the village when meeting the bus on route for "Madrid" and Melina is forced to take the low road. This is again a proof of clever film making, since they enter the village from the west side in the first scene (passing the church pictured above) and then comes up on the low road from the east side. They are driving towards the part they have already passed. 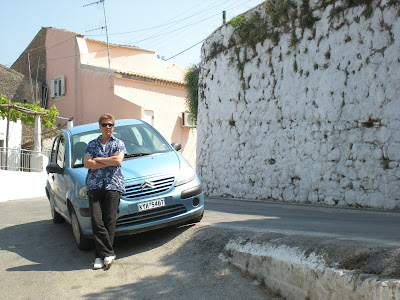 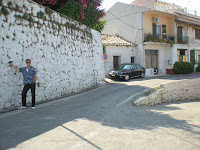 Pagi has been practically untouched since 1981, apart from new paint on some of the houses. The low road is where Sir Roger left it 30 years ago and still do not have any railing. The entire road through the village is quite narrow and it is not completely unbelievable that you could overturn your car here if you would come at high speed. After Bond and Melina has crawled out of the battered car, the "Spanish villagers" help them to get back on track after a change of driver.

Very briefly they drive past a small restaurant with the name 'Helados' above the door, which means ice cream in Spanish.

The restaurant is still up and running and the owner is happy to show scenes from the film on his TV inside the restaurant. 'Helados' of course is the Spanish word for 'ice cream'. This is a perfect place to stop for lunch and some cold drinks. The owner is very nice and makes a good Greek salad. He definitively exploits the fact that Bond was here 30 years ago, with the sign "Helados 007" hanging on the marquis above the entrance and the movie poster from For your eyes only is printed on the menus. He also has a small collection of model cars from the films inside the restaurant. 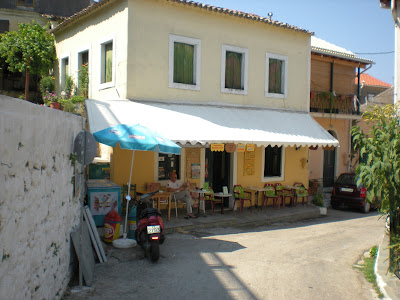 If you spend some time on the veranda, having your lunch, you have a nice view over this classic location, an opportunity that should not be missed. Occasionally you can enjoy the spectacle when a big bus is passing through the village. 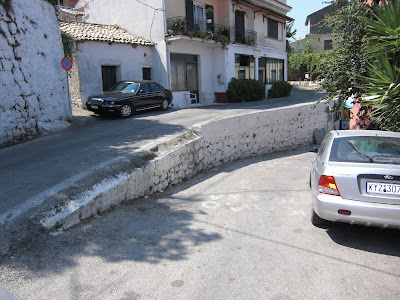 With this post I wish everybody a Merry Christmas and a Happy New Year!
For me it is time for a little Christmas vacation and i hope to see you again next year.