The "Hotel Splendide in Montenegro" features prominently in Casino Royale where it is in the center of the action during the second half of the film. The hotel can be found in Western Bohemia, a region in the Czech Republic, and is of course the Grandhotel Pupp. It is a five star spa hotel on walking distance from the city center, with a history dating back to the early 18th century. 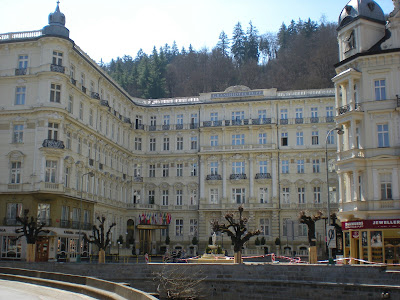 The big hotel complex spans over a few blocks and is situated alongside the Teplá river, with a nice view over the river and part of the surrounding city.

Bond finds his Aston Martin in the parking lot that belongs to the hotel. As a guest you can either have your car in the parking lot or along the street Goethova Stezka in front of the hotel where the more distinguished guests keep their cars. Alternatively you can park in the "gun barrel" parking at the main entrance.

The entire hotel complex is very beautiful and with the casino building close by, probably one of the most enjoyable locations I have visited. Of course there is no ''Casino Royale'' in Karlovy Vary, but the hotel has its own casino and the building seen behind Bond houses the 'Pupp Casino Club' and 'Becher's Bar', all part of the hotel.

Upon staying at the hotel, we've learned that it actually has two separate check-in counters. This is because the hotel consists of two different sections with the right section (seen in the top picture above), apparently being the five star part of the hotel, and the left part (overlooking the car park) being the four star section. I do not know why they have made this separation. 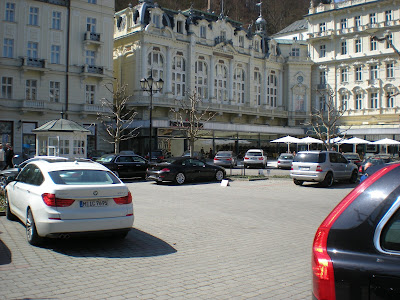 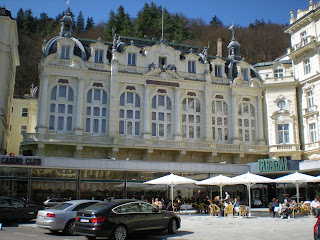 The hotel started as just 'Saxony hall' in 1701 but after various marriages and changes in ownership, the Pupp family, who eventually became the sole owner acquired neighboring properties and incorporated them into the hotel complex. Between 1896 and 1907 the buildings were rebuilt into the neo-Baroque hotel that stands today.

On the other side of the canal, behind the parking lot to the right, is the casino building visible. One of the things that makes this location so enjoyable is the fact that ''Casino Royale" is located just as close to the hotel in reality as it is in the film. So when Bond walks over to the casino in the first scene, the real hotel is seen in the background.
Post World War II, in 1951, the communist government of Czechoslovakia nationalised the hotel and renamed it Grandhotel Moskva, and it was not until after 1989 that the original name was restored and the hotel was privatised again.


Later I will cover the rest of the surroundings of the hotel and eventually, some details from the stay in one of the suites - a night at the Pupp.
Upplagd av R. Sterling kl. 01:50 No comments:

In For Your Eyes Only, Bond meets with Melina at Pontikonissi when she needs to go shopping for the crew. A few scenes were filmed in Corfu town, when they walk past the church of Agios Spyridon. The church's bell tower, not only the tallest in the city but in the Ionian islands, is briefly visible as Bond and Melina walk by. 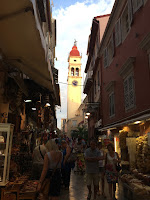 The church is named after the Saint Spyridon, who according to the myth expelled the plague from the island. Saint Spyridon is also believed to have saved the island from the Turkish army and naval force at the second great siege which took place in 1716.

Saint Spyridon church is located in the middle of the old part of Corfu town which is listed as an UNESCO world heritage site. The church stands on Spyridon Street, not unexpectedly where you also find the most number of tourists. The stop at a fruit stand where Spyridon street intersects with Filarmonikis. 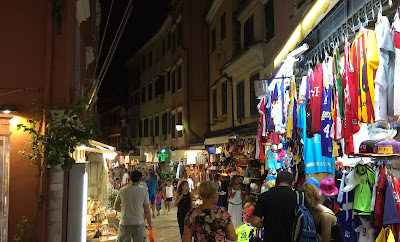 Eventually Bond and Melina pass the Maitland rotunda (covered here) and the old fortress, located in the very eastern part of Corfu town. The old fortress is also briefly visible earlier in the film. The view point they eventually arrive at, after walking through the city, can be found at the Achilleon Palace and is not located anywhere near Corfu town.

The Greek merchant that offers fruit to Bond and Melina utters the Greek phrase 'oriste despinis' (οριστε δεσποινις), which means 'here you are miss', to which Bond replies 'parakalo', meaning to say 'thank you', even though it actually means 'please'. 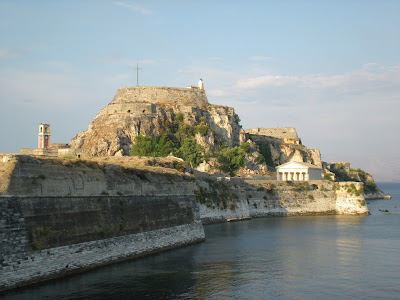 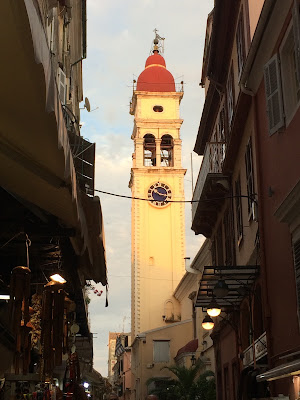 Email ThisBlogThis!Share to TwitterShare to FacebookShare to Pinterest
Etiketter: Corfu - Greece, For Your Eyes Only
Plats: Kerkira, Grekland

It was with great sadness that we heard the news of another tragic loss for Pierce Brosnan and his family last week when Charlotte Harris Brosnan, the daughter of Bond girl Cassandra Harris, died of cancer on 28 June. Charlotte, a mother of two, was 41 years old.
In 1986, the father of Charlotte and her brother died and Brosnan, who had married their mother Cassandra in 1980, adopted them. Sadly, in 1991, their mother and the wife of Pierce passed away from ovarian cancer, the same form that now claimed the life of Charlotte. The mother of Cassandra, Charlotte's grandmother, also died from ovarian cancer.

Charlotte's mother, Cassandra Harris, will of course forever be remembered for her role of Countess Lisl von Schlaf in For Your Eyes Only. There is undoubtedly a striking resemblance between the mother and daughter.
Upplagd av R. Sterling kl. 22:53 No comments: