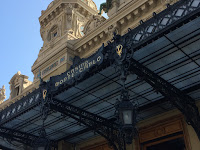 Ever since Dr. No, Bond has been synonymous with gambling, casinos and luxury, and there is probably no other place that is more associated with casinos than Monaco. Nevertheless, it would take over 30 years before Bond visited the famous Casino de Monte Carlo in the official series. Connery had actually visited Casino de Monte Carlo in the unofficial Never Say Never Again already in 1983, but in that film the casino was called "Casino Royale in Monte Carlo", but more on that below. 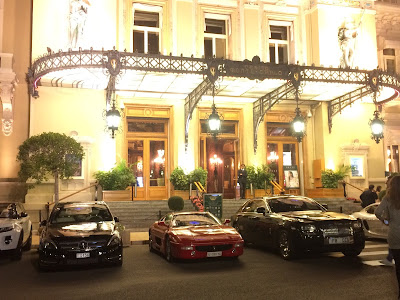 Thus, GoldenEye was the first real Bond film that took Bond to Monaco. After racing around the roads of Alpes-Maritimes with Xenia in her Ferrari, seducing Caroline above Monaco, that location covered earlier, Bond arrives at the casino later that evening, dressed in black tie. He notices Xenia's Ferrari 355 parked in front of the casino as he walks in.

In a brief scene, Brosnan is walking through the lavish gambling halls, which was filmed on location inside the Casino. For regular visitors, photography is otherwise prohibited. 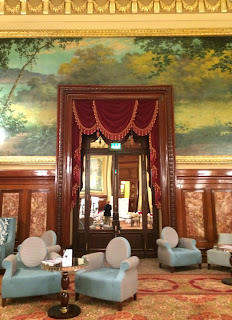 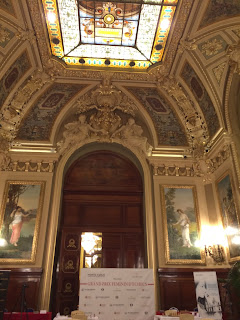 Bond is coming in from the doors on the above left picture, walks across the room and through the doors on the above right picture. The large wall painting in the left picture above is easily recognised from the film. The room Bond i walking through is called la Salle Touzet Nord, one of two similar rooms that lie parallel to each other, in the eastern wing of the casino.

After walking through la Salle Touzet Nord, Bond is entering an even bigger gambling room, that appears to be the room where he will find his Baccarat table. This gambling hall is perhaps the most luxurious in the casino and it is located at the end of the building in the most eastern part.

This iconic private room of the Casino de Monte-Carlo is called the Salle Médecin and was built in 1910 by Monacan architect François Médecin. The large notable mirrors makes this location easily recognisable. It also has a panoramic veranda-lounge facing the Bay of Roquebrune-Cap-Martin and a bar. At certain times of the year, there is a pop-up restaurant in the neighbouring room. This room is not open off season. 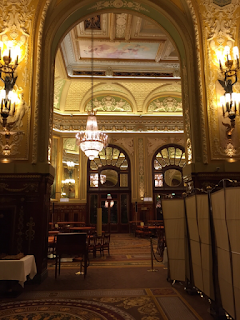 As the gambling halls that Bond walks through are located in the "salon privé" and high stakes area of the casino, you need to pay an extra fee of €10 (on top of the standard entrance fee of €10) to gain access. Please be properly dressed, although black tie is not necessary. The rest of the casino scenes were however filmed in studio, nonetheless brilliantly created by production designer Peter Lamont as seen in the picture below.

This brings us back to the unofficial Bond film Never Say Never Again, Connery's comeback as 007 twelve years after his last film, Diamonds Are Forever. Produced by Kevin McClory in 1983, whose legal actions against Ian Fleming might very well have contributed to his heart attack and untimely demise in 1964, Never brought 007 to the South of France and Casino de Monte Carlo for the first time. It is somewhat strange that the official Bond series had not taken Bond to Monaco before Never.

But, interestingly enough, the gambling hall that Bond enters in Never is the same hall, Salle Médecin, as Brosnan enters in GoldenEye. This is apparent both from the large mirrors and windows on the far wall, but also from the big wooden column seen to the right.


Connery and Brosnan are actually passing the same spot in the casino in their respective film, although Connery is coming in from a door on the left and Brosnan is entering from the Salle Touzet Nord as mentioned above.

It is easy to understand why this hall was used in both films, since it is located in the farthest section of the casino that can easily be closed for visitors during filming, allowing for the rest of the casino to stay open without the regular tourists knowing. Naturally, Casino de Monte Carlo is a must visit for everyone, not only for Bond fans, and a very personal favourite of mine.

Hildebrand Prints and Rarities - The Mi6 Safe House in Spectre

When realising that C, a.k.a. Max Denbigh has gone rogue in Spectre, M, Q and Moneypenny retreat to an Mi6 safe house in central London to regroup. Quite unexpectedly, they find Bond in the safe house, confirming to M: "it's safe". The safe house is located on the roof of a building located right by Trafalgar Square.

In the film, is the entrance to the safe house hidden in an old shop named Hildebrand, selling prints and rarities. The sign to the shop at the entrance reads: 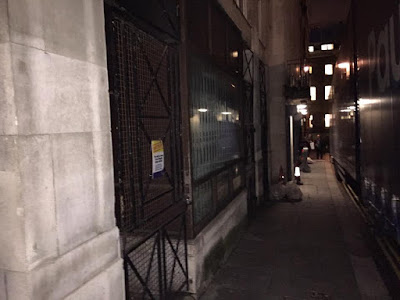 The name on the shop is one of the many references to previous Bond films and Ian Fleming that can be found in Spectre. The shop is named Hildebrand, which of course is a reference to Ian Fleming and one of the short stories he wrote named "The Hildebrand Rarity". This short story is included in Fleming's book "For Your Eyes Only" which is a collection of five short stories called: "From a View to a Kill", "For Your Eyes Only", "Quantum of Solace", "Risico" and "The Hildebrand Rarity". The year 1953 is of course a reference to the year when Fleming wrote Casino Royale. 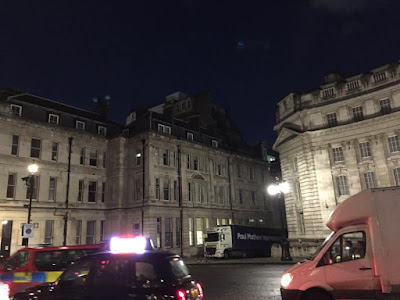 The film License to Kill is based very loosely on a few elements in Fleming's short story "The Hildebrand Rarity". Inter alia the character Milton Krest and the whip used by Sanchez in the film both feature in the book. So far are "Risico" and "The Hildebrand Rarity" two of the original Ian Fleming titles that have not yet been used as a name for a Bond film. 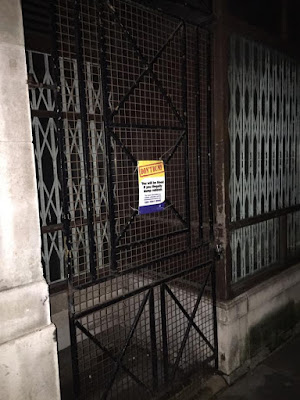 The safe house is located on the roof of the building at No. 35 Spring Gardens, overlooking Trafalgar Square.
Upplagd av R. Sterling kl. 18:44 No comments:

In Skyfall, Bond meets with Q at the National Gallery at Trafalgar Square to get his equipment and ticket to Shanghai. Bond is waiting in Room 34 in the British gallery, where paintings of British painters between 1750 and 1850 are displayed. 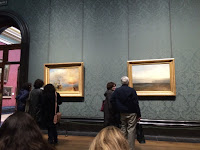 Bond is looking at the famous oil painting by William Turner called "The Fighting Temeraire tugged to her last berth to be broken up, 1838".

It pictures the HMS Temeraire, which had played a distinguished role in the Battle of Trafalgar in 1805, being towed away on the Thames to be broken up for scrap, after less than 40 years in service. In the film, the painting came to symbolise Bond's age and the claim that he may have had his day.

One of the paintings on the opposite wall, seen behind Bond, is Thomas Gainsborough's painting of "Mr and Mrs William Hallett (The morning walk)" from 1785. This painting can still be found hanging on the same wall as in the film.

It becomes obvious that some of the paintings have been rearranged since 2012, even though Thomas Gainsborough's painting of Mr and Mrs William Hallett appears to hang in the same place. In the film, to the left of Gainsborough (behind Q) is Joseph Wright of Derby's famous painting "An Experiment on a Bird in the Air Pump" from 1768. This painting had been moved at the time of my last visit in October 2015, and been replaced with another William Turner painting, namely "The parting of Hero and Leander" seen in the picture below. 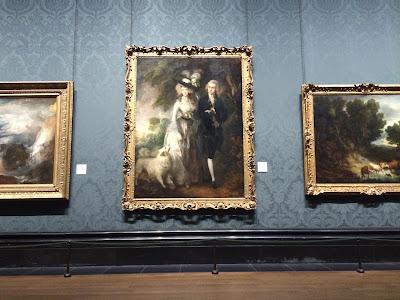 "Report to the new Quartermaster for your documentation. He hasn't set up shop yet but Tanner will put you two together."
- M to Bond -

The meeting takes place in the Sackler Room, room No. 34, at the National Gallery located at Trafalgar Square. Room 34 contains artwork from British painters, painted between 1750 and 1850.

The Sackler Room is named after Dr. Mortimer Sackler, who was an American physician and entrepreneur. He gave millions of pounds to numerous educational, scientific and cultural institutions and enabled the restoration of the principal British gallery at the National Gallery. 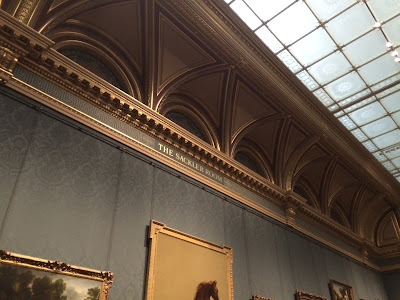 Just as Timothy Dalton's line "farewell to arms" in License to Kill was a reference to Earnest Hemingway's novel, which house Bond and M was meeting in, Bond's line in Skyfall: "Brave new world" is a reference to another author. 'Brave new world' was a novel written by the British author Aldous Huxley.

"-A gun, and a radio... Not exactly Christmas is it?
-What did you expect, an exploding pen? We don't really go in for that anymore."
- Bond and Q -

Perhaps the line "brave new world" also is reference to the line "farewell to arms" in License to Kill, since Bond is not getting very much equipment from Q. Just a gun and a radio...
Bond is obviously not too happy with the equipment or the new Quartermaster. 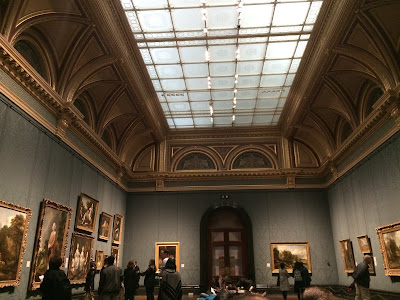 Room 34 at the National Gallery