Our Lady of Smolensk

Finally after a too long Christmas vacation and some beach-combing it is time for the first post of 2013!

In GoldenEye, 1995, Natalya goes to meet Boris in a local church in St. Petersburg. Boris writes to Natalya online and suggests a meeting at the church 'Our Lady of Smolensk'. Like so many other sites from GoldenEye, this church can be found in London, England. 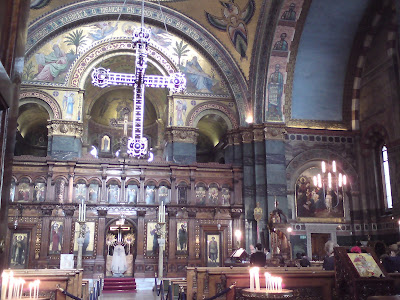 The interior scenes were filmed at St Sophia Church in Bayswater, London. It is actually not a Russian Orthodox church at all, but a Greek Orthodox cathedral. It is located where Moscow Road intersects with St. Petersburgh Place, a funny coincidence. 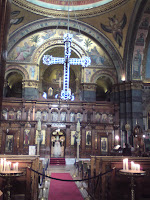 Our beautiful Izabella enters the church and walks underneath the cross suspended from the ceiling. When I visited the church there was a mass going on and I could not enter to get some proper pictures. Since I didn't want to disturb the mass I had to take some pictures discreetly, and the lighting is always a problem in churches, hence the rather poor quality. The Cathedral is probably one of the least interesting Bond locations in central London, but it is still very recognizable and has been mainly untouched since Izabella's visit in 1995.
The scene where Natalya approaches the church was shot at Brompton cemetery in Chelsea and not at all where the interior scenes were filmed. This cemetery was also seen in the first Sherlock Holmes movie with Robert Downey Jr, this time really being a London cemetery where Lord Blackwood is buried.

The real church on Moscow Road slightly resembles the exterior of the chapel in Brompton cemetery, and it is strange that they didn't use the real exterior for the film even though it is located in central London. Perhaps it was hard to get some good exterior shots of Natalya approaching the church at this location.
I hope it has been a Merry Christmas and a Happy New Year for all my dear readers!