Because of the rainy summer this next post will cover perhaps one of the best Bond vacation spots in the Mediterranean. Corfu is filled with beautiful scenery and Bond locations and hence a very convenient summer destination. The Island has been popular by the European Jet-set and Royalty for decades, even though that feeling is a little lost today.
When Bond is traveling to Corfu after some skiing in Cortina, he meets with Melina at Mouse Island or Pontinkonisi outside of Corfu town. The famous view was used as an establishing shot over Corfu and Bond picks up Melina at the narrow jetty where the boats land. Pontikonisi is home to the monastery of Pantokrator, probably one of the smallest monasteries in Greece. The small island is located just behind the airport in Kanoni and the airplanes landing at Corfu are flying over the monastery, not providing a very peaceful atmosphere for the inhabitants.

"I radio telephoned the Triana and they told me you were coming ashore."
-Bond- 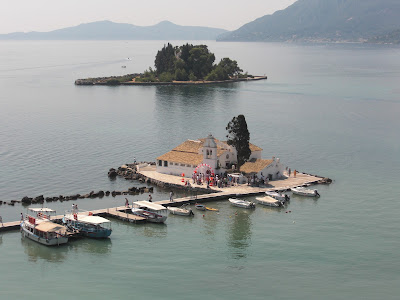 Unfortunately Pontikonisi is popular by tourists and probably one of the most photographed sites on the Island, therefore you can't count on spending time here alone. And sometimes balloons or other nonsense can ruin your pictures... A good idea is to have a drink at the appropriately named 'Hotel Royal' just above the small island. From here you have an excellent view over this beautiful Bond location and you can also spend some time plane spotting with a glass of ouzo or white wine in the sun. 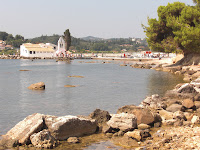 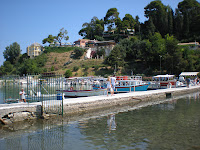 "I'll come straight to Corfu I promise..."
-Bond to Melina- 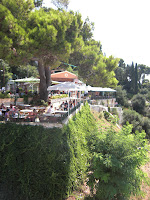 Even though the action early in the film, taking place outside Madrid, was filmed on location in Corfu the shot over Pontikonisi establishes Bond's first visit to the Island. Sir Roger is wearing a double breasted blazer to this location and the summer would not be a very good time to wear something similar in Corfu. Perhaps in the evening, otherwise the more appropriate season for a blazer in Corfu would be early spring or late autumn. 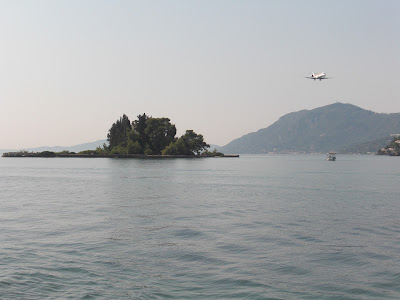 Email ThisBlogThis!Share to TwitterShare to FacebookShare to Pinterest
Etiketter: Corfu - Greece, For Your Eyes Only
Plats: Paleopolis, Korfu 491 00, Grekland

In Casino Royale Bond follows Carlos, the terrorist from the Body Worlds exhibition, to Miami International airport. Like most of the action in Miami, the airport scenes were filmed in the Czech Republic. Prague International airport, Ruzyne, doubled for Miami airport. 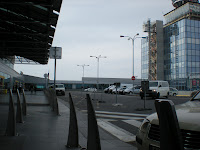 The best thing about visiting locations from Royale is that next to nothing has changed since 2006. Airports are normally subject to changes and extensive renovations due to increasing traffic and it is therefore almost impossible to find an airport from the earlier films (e.g. Las Vegas, Istanbul) that is still recognizable.  But this is not the case at Ruzyne. Very little has changed since the shooting of the film and even the real traffic signs were used. 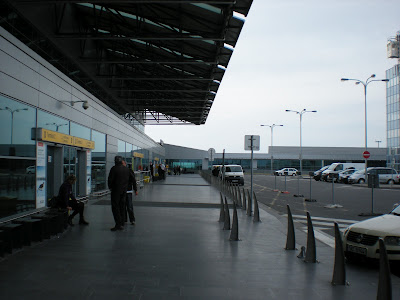 The departure entrance were this scene was filmed is actually on the second floor of the airport, with another departure terminal below and a big ramp for the traffic. This becomes evident when you see the walking bridge in the pictures below. Bond is entering the airport from the third entrance. The interior scenes, apart from Bond's entry, were filmed at Nassau International Airport in the Commonwealth of the Bahamas.

The walking bridges connects the parking with the departure/arrivals hall. Carlos is coming up from the escalator, which is a factual error since both Carlos and Bond are entering from the same level. The rest of the action taking place at Miami airport (for instance Bond jumping on the petrol truck) was filmed on location at Ruzyne and the Dunsfold Park Aerodrome in Surrey, England. The Skyfleet S-570 is actually a rebuilt Boeing 747 that was bought by a company specializing in supplying aircraft for television and film work and it can still be found at the Aerodrome today. The plane has also been visible in various episodes of Top Gear since parts of this program is filmed at Dunsfold Aerodrome.

Another thing that reveals the location to be set in Prague is the 'Travel Service' airplane. On the side of the plane you can read - Unimex Group. This is one of the largest private companies in the Czech Republic, involved in housing, tourism, hotel development and travel. Unimex Group is also mentioned at the end credits.