Pipeline to the west - Gasometer, Vienna

In The Living Daylights Bond helps a Russian general, Georgi Koskov, defect to the west. The defection takes place in Bratislava and when the general asks how he will get across the border, Bond tells him that they have a pipeline to the west. The general is then sent across the border from Czechoslovakia over to Austria in the Trans-Siberian Pipeline. The pipeline is ending up in a gas tank called gasometer, in Vienna. Q is there receiving the general. 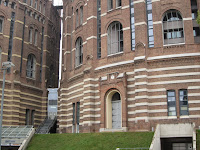 All of the action in Bratislava were actually filmed in Vienna, and the four gasometer buildings can also be found here, alongside Guglgasse in the district Simmering, some 15 min. outside the city center. The containers were originally used to help supply Vienna with gas. In the film, the pipeline is supposedly ending up inside the last of the four gasometer buildings. This is the most eastern building, 'Gasometer D'. For the film, a fake piece of the pipeline was constructed and just attached to the building. It was probably just a small pipe that looked bigger on screen. 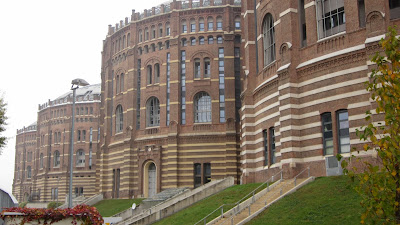 When the buildings were retired in the 1980's the "shells" were preserved and the structures found a new use with buildings constructed inside. Today all four gasometers house apartment buildings, shops and a mall. Very little of the original interior can be seen. But you can always have a nice lunch in the galleria inside the A building, and get as close to Koskov as you can.
The four buildings were originally constructed between 1896-1899 as part of the Vienna municipal gas works. They were in use until 1984, and thus available for the film team in 1987 at the time of The Living Daylights. 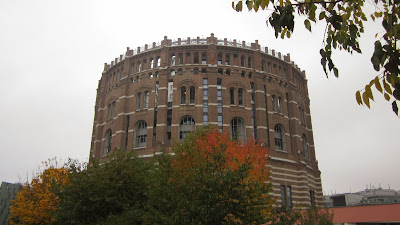 You have a nice view over the last gasometer, the one Koskov escapes from, from Otto-Herschmann-Gasse. The untouched exterior makes this location well worth a visit when in Vienna. It is conveniently located just by the underground station "Gasometer". 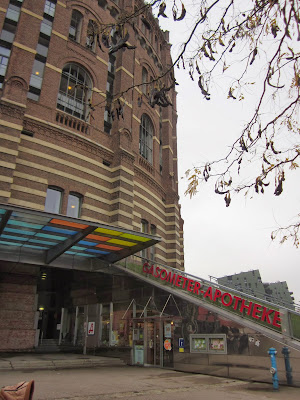 In honour of Sir Roger Moore, who celebrates his birthday today, I will make yet another post from The Persuaders! and the episode that starts off in the Capital of Scandinavia. 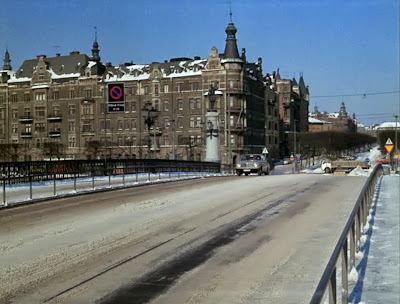 The first part of the episode "The morning after" takes place in Stockholm where Lord Sinclair wakes up at Grand Hôtel discovering he is married.

Brett and Danny are on their way to the parish office (covered earlier) in a taxi and during the ride we see one of the most exclusive parts of the city. They are driven across Djurgårdsbron over to Djurgården, or 'The Royal Game Park'. The name stems from the game park of King Johan III, which he created in 1579. Since the 15th century the Swedish monarch has owned or held the right of disposition of Royal Djurgården. In the early 19th century, Djurgården developed into a stately residential area when a few foreign dignitaries were given some exclusive land plots. 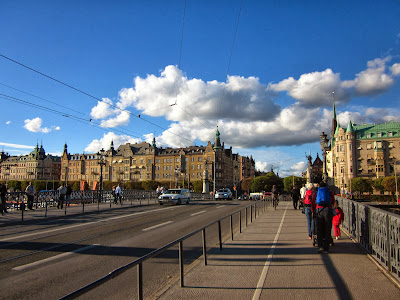 In the background you see the buildings along the boulevard Strandvägen, one of the most prestigious addresses in Stockholm along with Djurgården. The boulevard Strandvägen and the bridge to Djurgården were constructed just in time for the Stockholm World's fair in 1897. Part of the bridge and Strandvägen are visible behind Brett and Danny when riding in the taxi. The building used as the parish office is located in the opposite direction so ultimately they are going the wrong way. 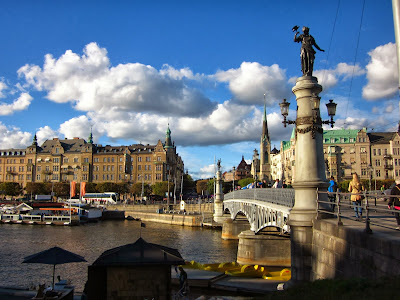 This area, including Djurgården is truly a beautiful part of Stockholm and a walk along Strandvägen is highly recommended. If you continue down Strandvägen you will ultimately reach the commercial center and the Royal Dramatic Theatre. 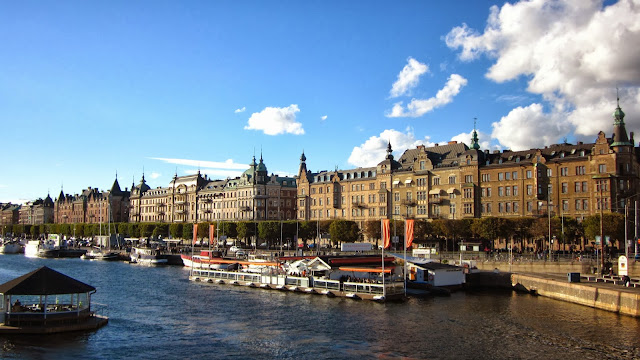 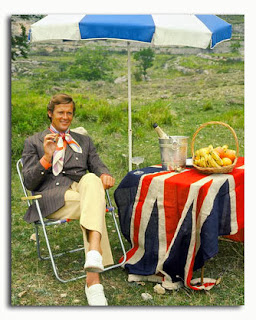 To one of the nicest persons in the world, long may he live!
Upplagd av R. Sterling kl. 11:17 No comments:

In Moonraker Bond goes to Rio to investigate the affairs of Hugo Drax. In a warehouse belonging to the importer firm 'C&W' (Carlos & Wilmsberg) in downtown Rio, Bond learns that Drax is moving his merchandise through his cargo airline 'Drax Air Freight'. Manuela tells Bond that 'Drax Air Freight' operates out of San Pedro Airport and Bond gets up to the Sugarloaf mountain to check it out.

The airport can be seen from the viewpoint on top of the mountain, no doubt one of the most famous tourist attractions in Rio. In reality the airport is called Santos Dumont Airport, after a Brazilian aviation pioneer. Why San Pedro was used instead of the real name is unclear.
The Drax Air Freight plane however is a Lockheed L-188 Electra, in reality belonging to Varig Airways, the leading Brazilian airline at the time. The dark blue plane livery can be recognized if you compare Drax's plane with the Varig plane in the picture below. Santos Dumont airport was one of the main airports that Varig used in Brazil. In 1959 together with two other airlines, Varig had initiated an "air shuttle service" between Rio-Santos Dumont airport and São Paolo airport. The three airlines coordinated their schedules and operations and shared their revenue. Due to the success of this shuttle service led by Varig, it was abandoned only in 1999. The interesting fact is that this route was served exclusively by Varig's Lockheed L-188 Electra between 1975 and 1992 and the aircraft used on this route did not have the Varig name on the fuselage for the sake of neutrality to the other two airlines. This would have made it easy for the filmmakers to use one of Varig's aircraft in the film and put the name "Drax Air Freight" on the side, since the fuselage didn't have the Varig logo on it.
The Lockheed L-188 was developed in the 1950's by the American manufacturer Lockheed. It first flew in 1957 and was the first large American turboprop airliner. However, the engines would soon be replaced by turbojets and many of the aircraft that still used this engine type were modified as freighters.

Another Varig aircraft, or at least the tail, can be seen behind the Concorde when Bond arrives in Rio. The Concorde did not land at Santos Dumont Airport however, but at the larger Galeão International Airport. Varig also receives a thank you in the end credits of the film.

Varig was the leading and almost only international airline in Brazil between the years 1965 and 1990. Beginning with the new millennium, Varig experienced financial difficulties and after a reconstruction and two failed attempts to auction the airline, Varig was split into two companies. The call sign ceased to exist in 2008.

On a Lockheed related subject, both the president and Goldfinger have private planes from the Lockheed company in Goldfinger. As Pussy Galore points out:
"The humming means you're in Mr Goldfinger's Lockheed Jetstar heading for Baltimore."
Upplagd av R. Sterling kl. 15:21 1 comment: