From Russia With Love - Venice 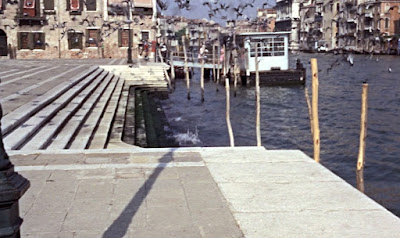 For the final scenes in From Russia With Love, right before we find Bond and Romanova in the boat taxi passing under the bridge of sighs covered earlier, the camera pans over the Grand Canal as a flock of pigeons fly by. This scene is actually not related to the following scene with Bond and Romanova in the boat and was probably only added to show some Venice locations. 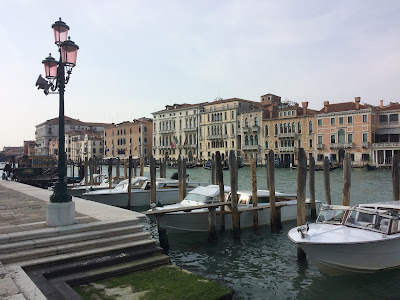 After the pigeons fly away from the quayside the camera pans over the canal and the San Marco district on the other side of the canal.

This scene was filmed in the southern part of Venice, namely on the most southeastern tip on the Dorsoduro District. The camera was rigged on the quay of Fondamenta Salute, right in front of the iconic church, Basilica di Santa Maria della Salute. 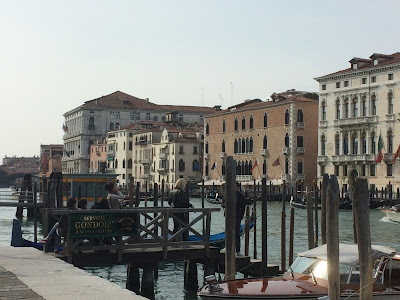 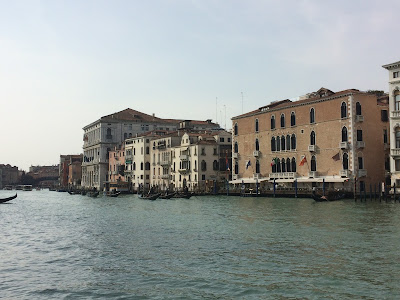 For obvious reasons Venice has not changed much since 1963 and the time for filming From Russia. This part of the canal and the facades are still very recognizable. The large light brown building in the picture above, also visible in the film, is the Gritti Palace hotel. 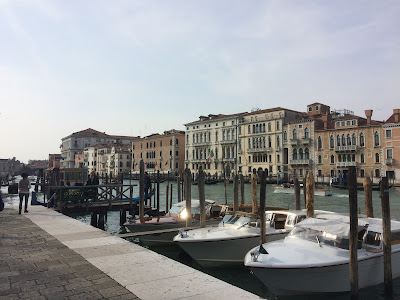 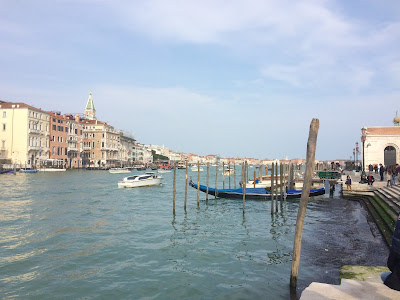 The easiest way to get to this location is to take the Vaporetto (bus boat) to the station "Salute".


After Bond has decided to leave Mi6 and sail around the world with Vesper, they ultimately end up in Venice, the city of lovers. Before sailing into Venice, Bond sends an email to M and gives her his resignation with immediate effect. As Bond and Vesper are sailing down the Grand Canal they pass a famous location in Venice, namely the Rialto Market. 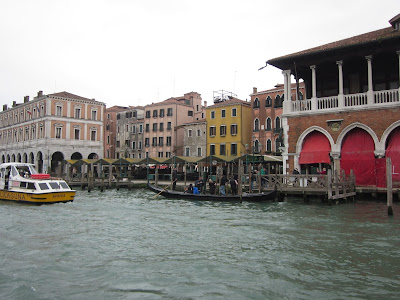 It is at the Rialto Market where Vesper spots the mysterious Mr Gettler for the first time as he is strolling around the market. The market place is located in the northern part of Venice in the San Polo district. 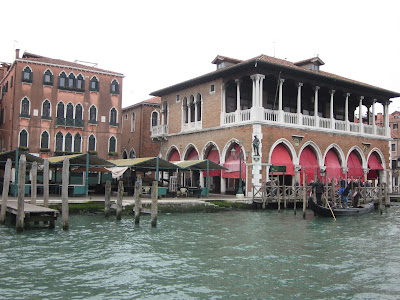 Right by the Rialto market you can find one of the traghetto stations. The traghetto is a cheap "bus gondola" that runs between fixed stations on either side of the Grand Canal and takes people to the other side for only €2. However, this is not a "real gondola", for that you will have to pay around €80 for a 30 minute ride. 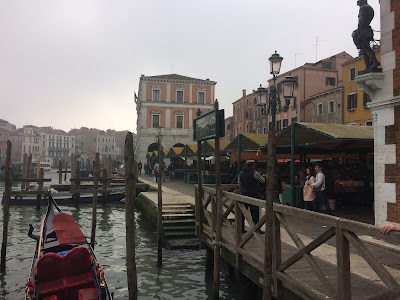 The Rialto fish market, Campo della Pescheria, has been selling seafood for over 600 years. The area is still a busy retail quarter, with the daily Erberia greengrocer market, and the fish market. 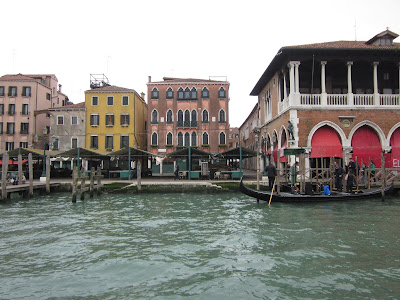 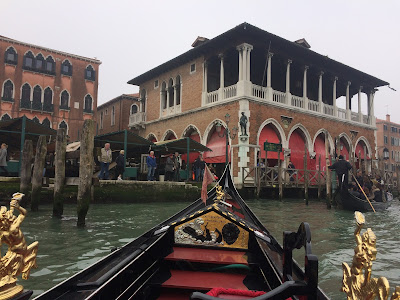 In order to get some even more SONY products in the film, in addition to all computers, Bond's and Vesper's phones, the TV's, DVD's etc, Vesper takes pictures of the Rialto market with her SONY camera. At the same time she spots Mr Gettler at the market, realising that Mr White's people have found her and that she is ultimately going to her death. 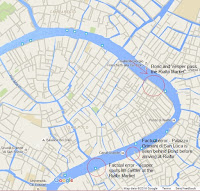 There are a few factual errors in the Venice scenes, since Bond and Vesper are filmed in fron of houses that are not located opposite the Rialto Market. Bond is seen sailing pass the Palazzo Grimani di San Luca which is located further down the Grand Canal from the Rialto, and as Vesper supposedly is taking pictures of the Rialto Market and spots Gettler, the Vaporetto station "Sant'Angelo" can be spotted in the background. This Vaporetto station (which is the Venice bus stops) is also located further down the Grand Canal and is thus not located opposite the market place. 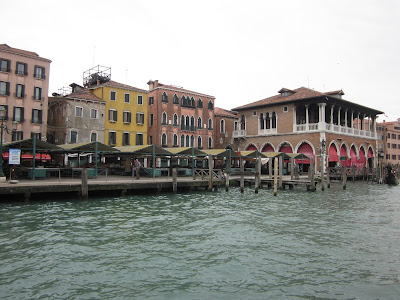 There are some beautiful panoramic shot of Venice as Bond and Vesper arrive from the south. The small island seen to the left of Bond's sailing yacht in the picture below is San Giorgio Maggiore and in the background, the bell tower on St Marc's Square is visible.

John Le Carré's The Russia House was filmed in 1991 and is partly set on location in Lisbon. Sean Connery plays the British publisher Bartholomew Scott-Blair who is spending most of his time drinking when his easy life is interrupted as he is recruited by the Mi6. Barley owns a holiday flat in central Lisbon. 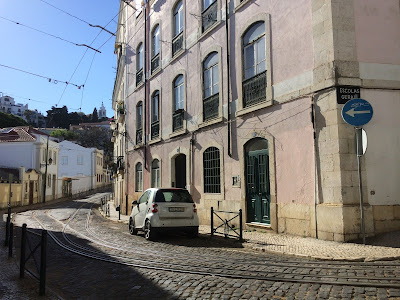 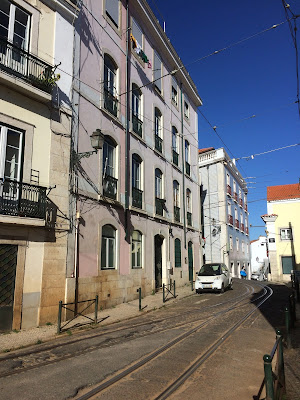 Barley's flat is located at Escolas Gerais in the Alfama district, located in the east central part of the city. This is one of the oldest and more beautiful parts of the capital and Alfama spreads down the southern slope from the Castle of São Jorge down to the River Tagus. Parts of this district is also seen during several establishing shots in the film.

Barley's flat has a stunning view over the Alfama district and down towards the river. 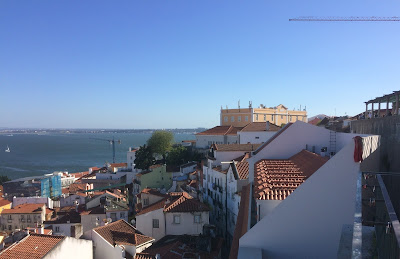 The large yellow building, seen from Barley's flat, is located at Rua Limoeiro to the West of the neighbourhood and is the Centro de Estudos Judiciários. Among many of the other buildings in Alfama is the Lisbon Cathedral from the 12th–14th centuries, which is the oldest of the city.

In 1991, Sean Connery starred in the spy thriller The Russia House based on a book by John le Carré.  The Russia House is one of only a few western film productions that were shot largely on location in the Soviet Union, before the fall of the eastern bloc and the end of the cold war. However, the story begins in Lisbon, where quite a few scenes were filmed. Barley is found in Lisbon by Mi6 where he is getting drunk at a local bar. 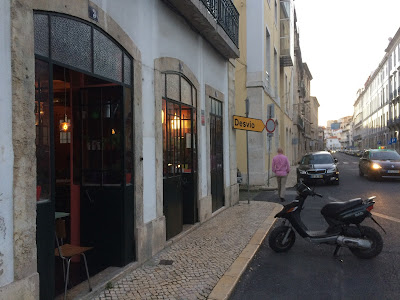 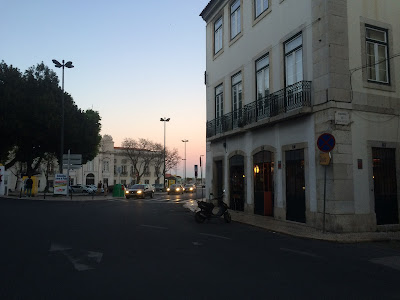 Connery plays the publisher Bartholomew "Barley" Scott-Blair, who gets involved with Mi6 as a young Russian woman tries to deliver to him a secret manuscript for him to publish. The manuscript turns out to be a document detailing the Soviet Union's capability for waging nuclear war. As the manuscript is of vital importance also for the CIA, Mi6 wants Barley to find the man who has written the manuscript and find out whether the information is genuine.

British intelligence officers track down Barley in Lisbon, where he has a holiday flat and occasionally enjoys quite a few drinks at his local bar. After finding Barley, Merrydew brings him to Mi6's secret house in Lisbon, under the pretense that Barley has an urgent message at the embassy, but in reality to secretly interrogate him about the manuscript. 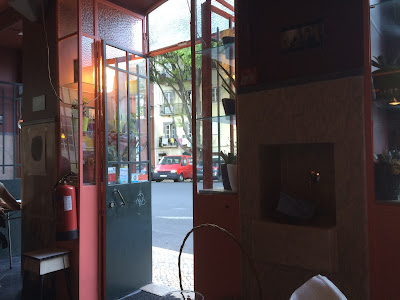 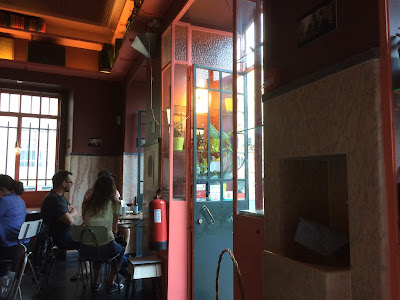 Barley's bar is located at Rua Jardim do Tabaco number 5, in the Alfama district in central Lisbon. This is actually quite a credible location for Barley's local bar, since his flat is located at the street Escolas Gerais which is only located a few hundred meters away from the bar. Barley's flat will be covered later. The tram tracks that used to run along Rua Jardim do Tabaco (seen in the film) have been removed.

Quite appropriately, coinciding with the film's title, a Russian Orthodox church is visible from the bar and seen behind Barley in the scene. The church is called Igreja Ortodoxa Russa in Portuguese. 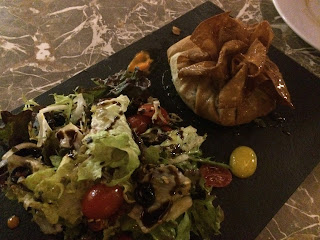 The place is still a bar/restaurant today, although it has not always remained open since Connery's visit in 1991. After being closed for many years the place is relatively newly opened and is definitely worth a visit when in Lisbon! The place is called Agulha no Palheiro, meaning "needle in a haystack" which quite well symbolises the place, since it is quite hard to stumble on in Lisbon.

However, this place is definitely worth visiting, not just for the location but for the food and drinks. We had dinner at the place and enjoyed among other things their own cured salmon and baked goats cheese with honey. All courses were to die for. 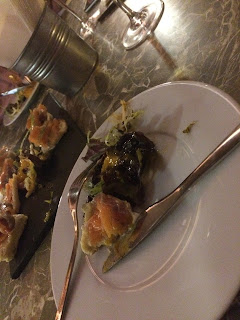