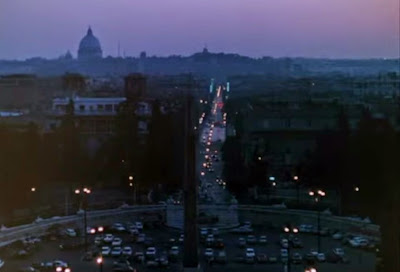 As we are getting ready to finally see Rome as a new Bond location in Spectre, it has naturally been used rather extensively as a filming location throughout the decades. Rome was for instance the location for Lord Sinclair and Danny Wilde in an episode of The Persuaders!. In the 17th episode, called 'Five Miles to Midnight', Danny and Brett are sent to Rome to help judge Fulton to smuggle an American mobster out of Italy. As per usual, most of the scenes were shot in Pinewood, but a few establishing shots over Rome were filmed on location. 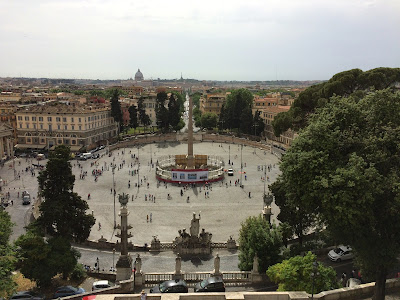 The episode starts off with a panoramic view over Piazza del Popolo, a large oval square in the northern part of central Rome. You have the best view over the square from one of the viewpoints in the garden of Villa Borghese, for instance near Piazza Bucarest. Piazza del Popolo is an odd choice for an establishing shot, since it is perhaps not the most characteristic place in Rome, even though St. Peter's Church is visible in the far background. 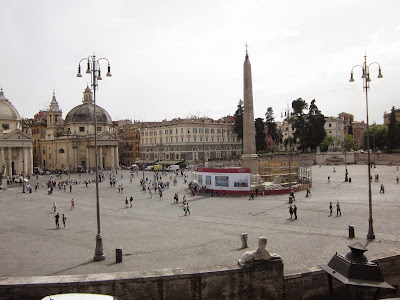 After the title sequence Brett is driving his Aston Martin around town and few famous sights are featured. 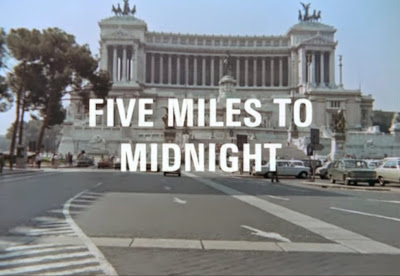 Brett makes his entrance in the episode in front of Altare della Patria, (Altar of the fatherland), also known as the national monument to Victor Emmanuel II. He arrives on the Via dei fori Imperiali and drives across Piazza Venezia, which is the big square right in front of the monument and Rome's answer to Trafalgar Square. Built in honour of Victor Emmanuel who was the first king of unified Italy, the monument was inaugurated in 1911 and completed in 1925. 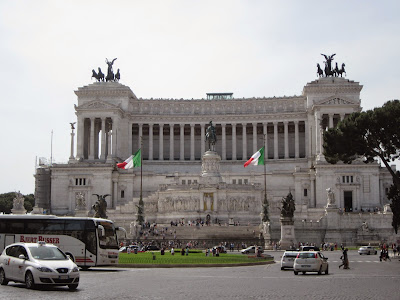 Very briefly seen in the background behind Lord Sinclair is the imposing Palazzo Venezia which also faces the big square. This is a Renaissance palace built in the 15th century by Pope Paul II. The palace is perhaps most known for being the place from where Mussolini harangued the Italian masses during the fascist era. Il Duce declared war against Britain and France on 10 June 1940 from the stone balcony seen in the two pictures below. The balcony connects with the Mussolini’s old office. 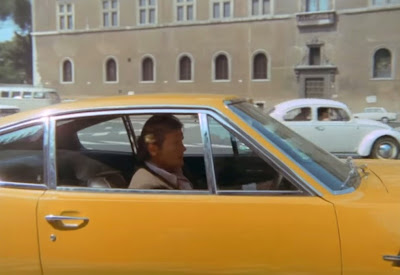 Having the most British of all Lords driving his Aston Martin past the balcony where Italy, 30 years earlier, had declared war on England was perhaps a cheeky hint to Il Duce. The palazzo today houses a museum. 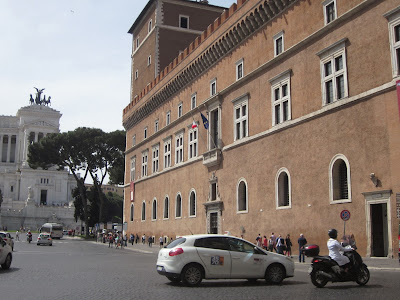 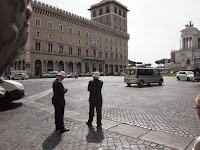 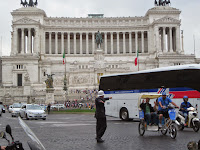 The principal filming of Spectre started on 8 December 2014 and in February the cast and crew went to Rome. From the teaser trailer we learn that Bond will attend a funeral in the Italian capital. Bond will also drive his Aston through the streets of Rome and the city will feature a car chase close to the Vatican and along the river Tiber. A few shots from the funeral were released in the teaser trailer featuring Bond observing the mysterious Lucia Sciarra, played by Monica Bellucci. Spectre will be the first film to feature Rome as a Bond location. Bond is nonetheless well acquainted with Italy since he previously has been sunbathing in Sardinia and Talamone, done some skiing in Cortina, driven his Aston Martin on the roads along lake Como as well as in the city of Sienna and he has visited Mr White's palazzo by the Garda lake. Bond has also been to Venice on three different occasions, which makes Venice together with Istanbul, the most visited city by Bond (excluding London of course). However, although Bond has yet to visit the Italian capital, there is a reference to Rome in the beginning of Live and Let Die. M congratulates Bond on the way he had handled the "Rome affair" on which the Italians were very pleased. Thus, Bond will probably know his way around town. 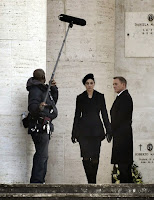 The funeral scene was filmed around the Museum of Roman Civilization (Museo della civiltà Romana) in EUR, south of the city centre of Rome. The funeral was staged in between the columns that connects the two large wings which houses the museum. The film team were actually supposed to film the funeral scene at the Verano cemetery, which is a famous early 19th century cemetery in the central part of Rome, close to the Termini Station. It boasts the graves of several Italian cultural icons. However, the film team was refused to film there by an ancient Christian confraternity, namely the Arciconfraternita di Carità verso i Trapassati. Thus the team had to relocate to the EUR district and use the museum to recreate a mausoleum. The cemetery is reminiscent of the Slumber cemetery in Diamonds are Forever. 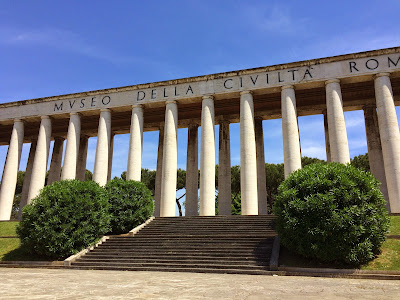 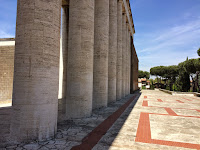 The film crew converted the area to a cemetery with fake head stones between the columns before filming took place on and around 19 February this year.

The museum itself consists of 59 sections which illustrate the history of Roman civilization but it is currently closed for renovations, which apparently made it an ideal choice. On the back, there is an open patio that faces a row of trees that also can be seen in the bottom picture. 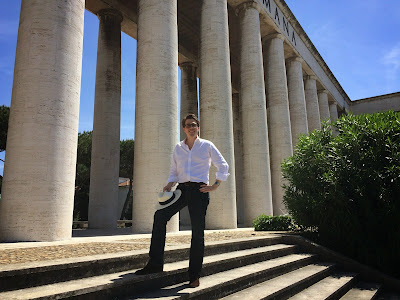 EUR is a residential and business district that was planned and chosen by Mussolini to hold the World Fair in 1942. The fair would celebrate 20 years of fascism but due to the war, the project was never finished. However, the usefulness of a business district outside the city centre was soon recognized after the war, and in the 1950's and 1960's the fascist era buildings were completed and new, more contemporary buildings were constructed. Two monstrous wings extend from the columns and create a big square, mainly used as a parking lot today. 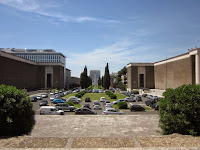 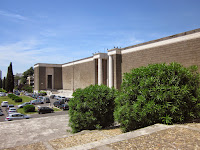 "-I was at a meeting recently and your name came up.
-I'm flattered London is still talking about me.
-It wasn't Mi6..."
- Bond to Mr White - 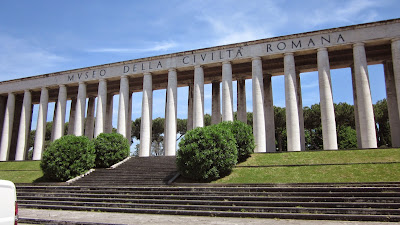 This is not the first time that the Bond team has been refused to use a religious location for filming. In For Your Eyes Only, the monks at S:t Cyril's tried to sabotage filming by putting sheets and blankets on the roofs of their houses when they had not been sufficiently compensated by the Greek municipality as they had been promised. The film team then had to recreate the S:t Cyril monastery on an adjacent rock. 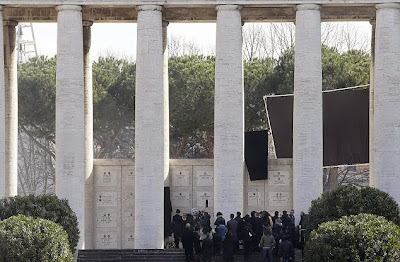 After killing agent Ronson and stealing the valuable hard drive, Patrice escapes and is chased by Bond through Istanbul. After crashing his car and picking up a police motorbike in the big square in front of Yeni Cami (New Mosque) and the spice market, down in the Eminönü district, Bond chases Patrice to the Grand Bazaar. 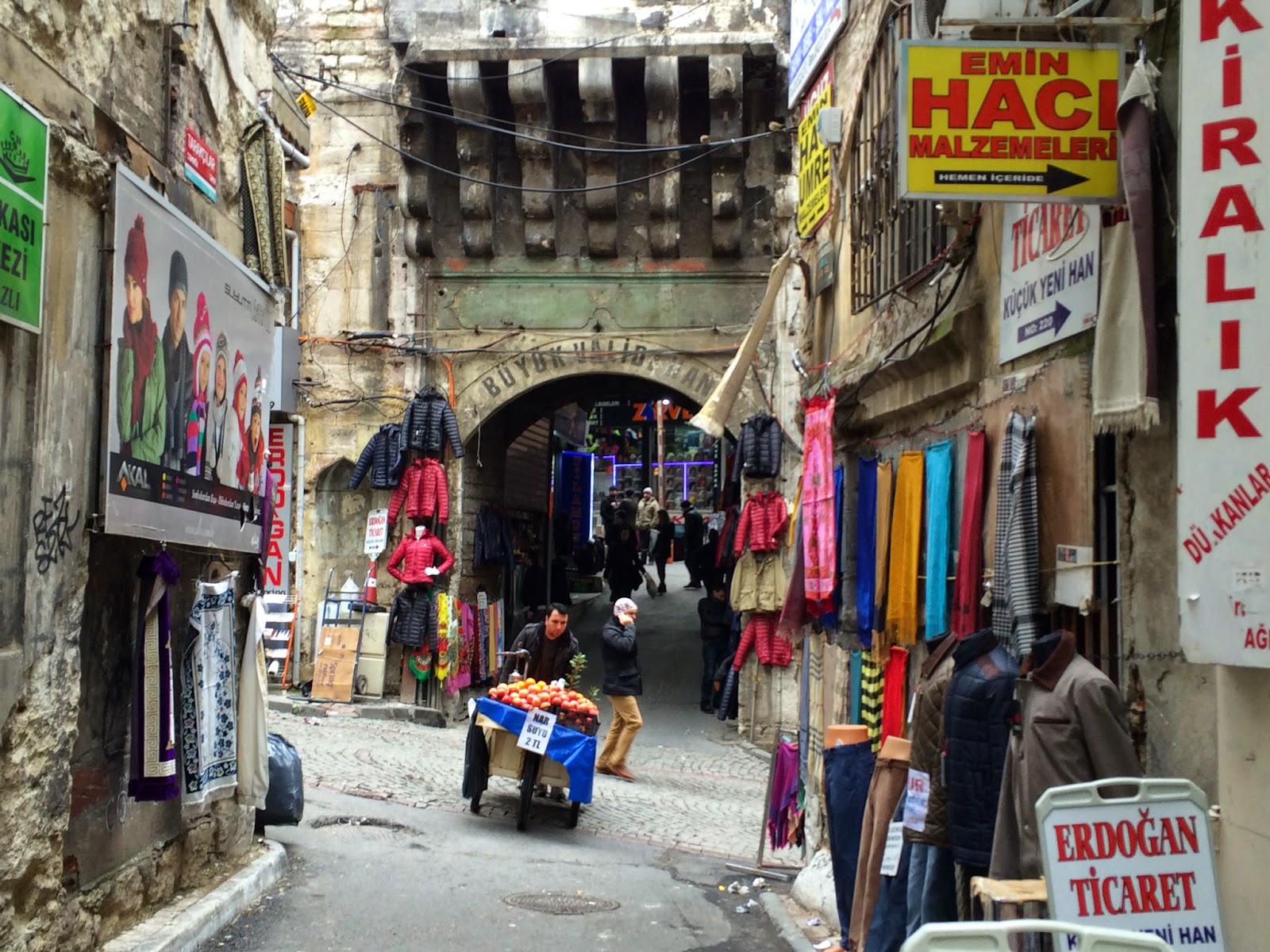 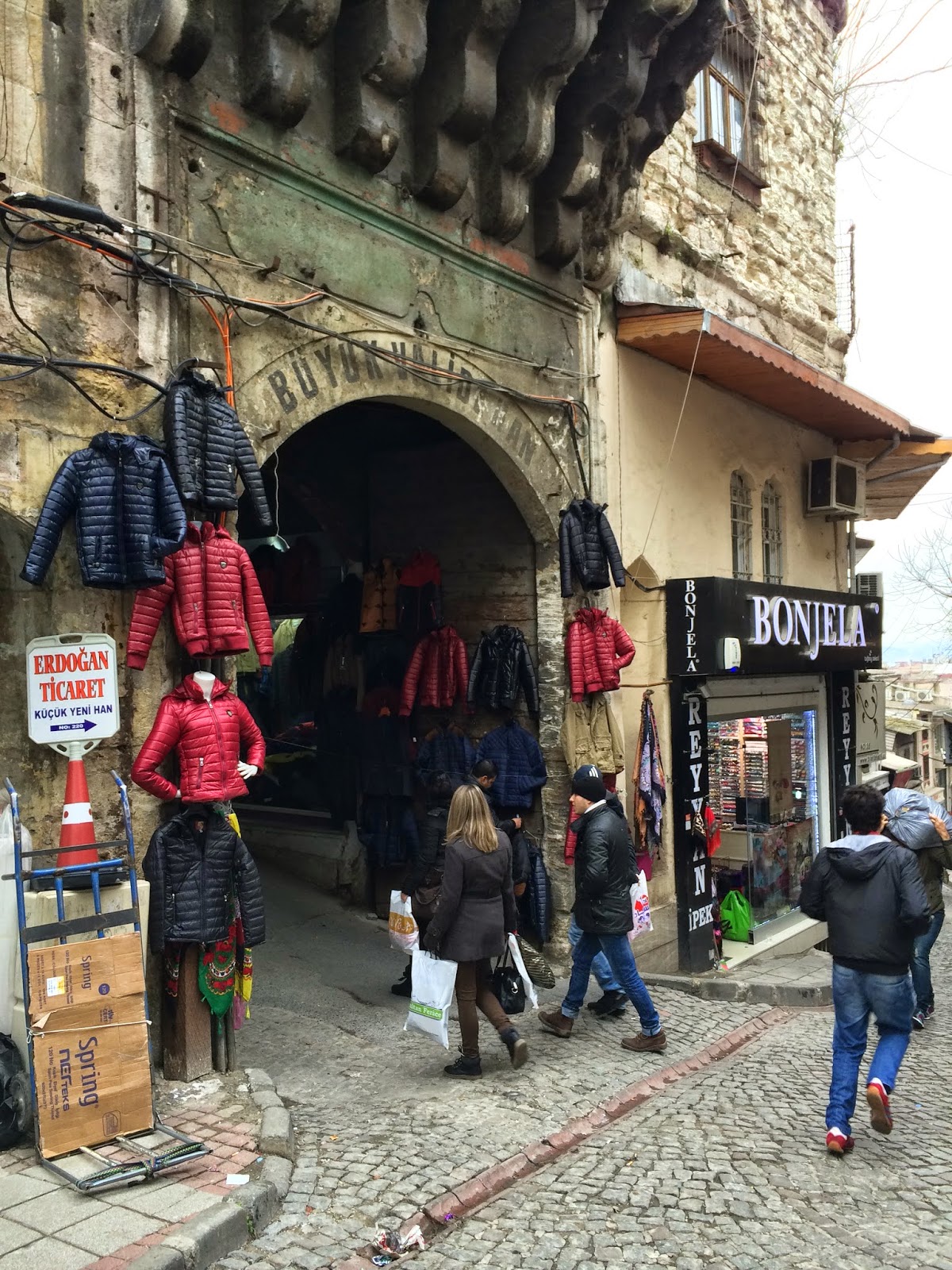 Bond and Patrice drives through an entrance called Büyuk Valide Han, located in the periphery of the Grand Bazaar. Bond and Patrice are driving through the house, across a square and up some stairs in order to get up on the rooftop. The square can be found if you walk through this house but the chase has been edited so that Bond and Patrice are driving in from the other side of the square, actually driving back towards the entrance. When walking through Büyuk Valide Han, you will find the stairs where Bond and Patrice drive up on your left hand, inside the house. The stairs and the second floor where they come out with the motorbikes are making this location worth visiting.

Patrice and Bond drive up a staircase and come out on the second floor. Then, with some clever film editing as always, Bond and Patrice drive through an opening in the wall and come out on the rooftops of the Grand Bazaar, which will be covered later. 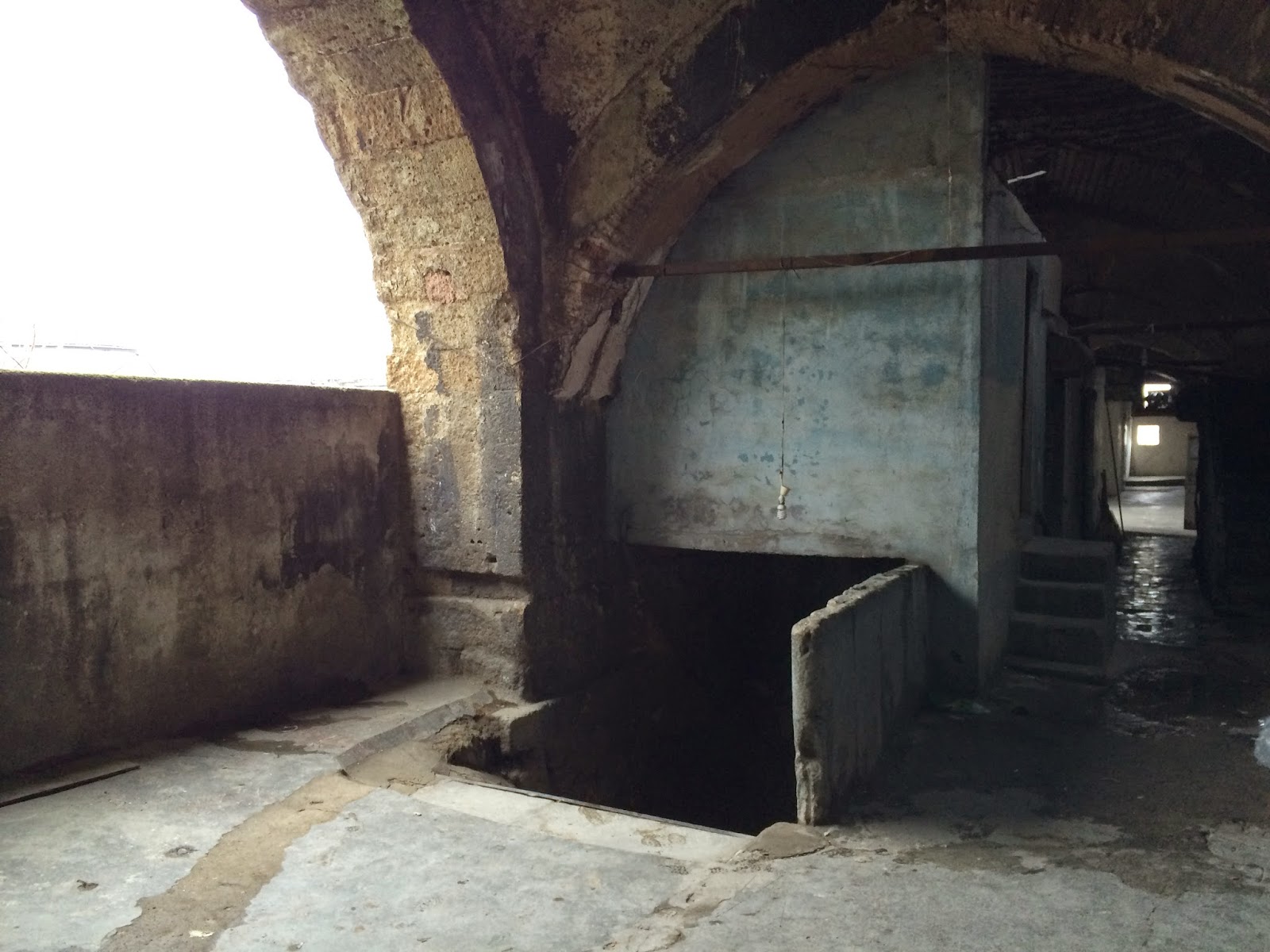 However, there is in reality no way out once you have come up the stairs and it would be impossible to drive anywhere, least of all up on the rooftops. Hence, Patrice could have been captured here already. What a pity for Bond... 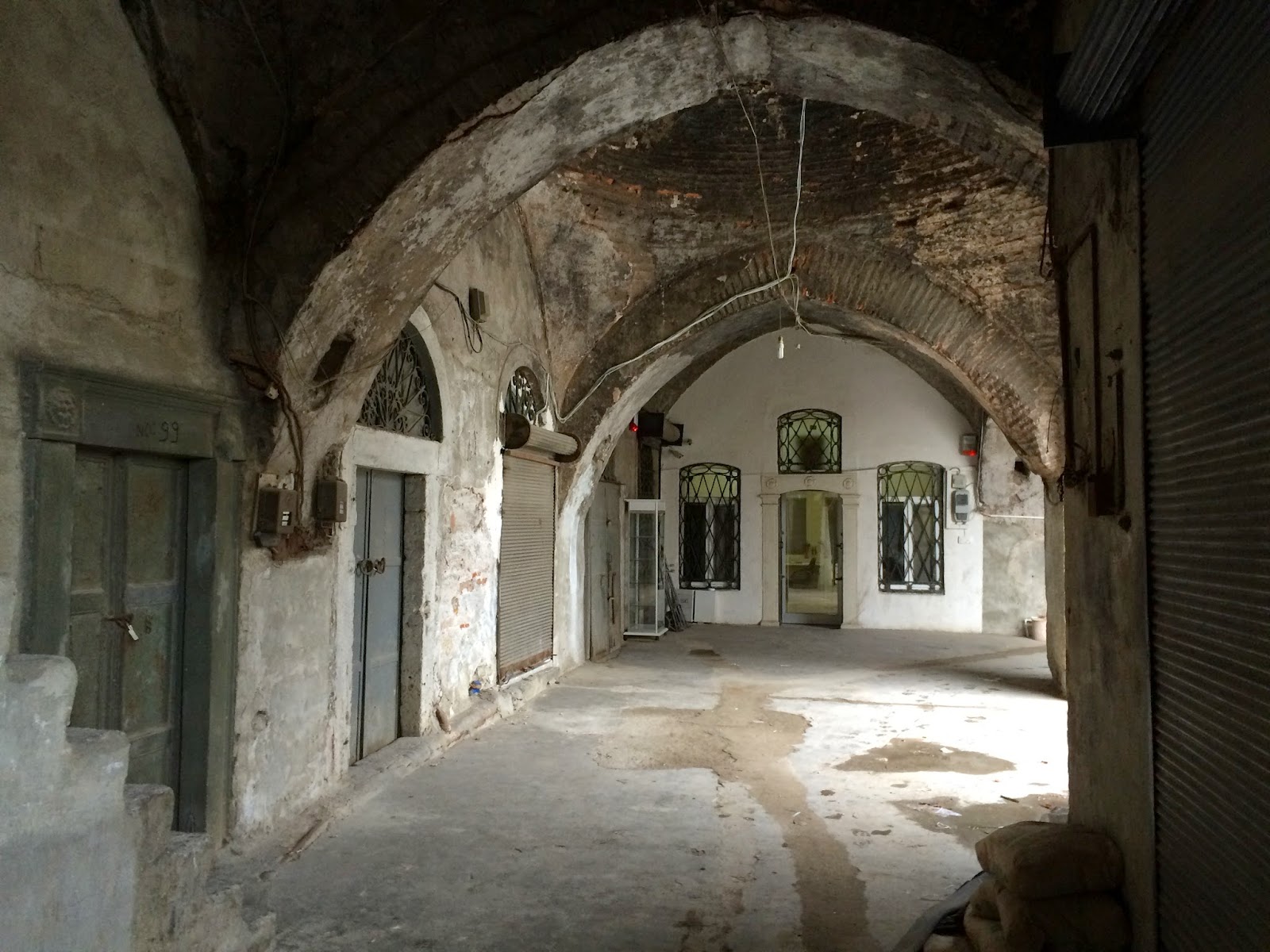 It is probably not worth trying to explain in detail how to find this location, first because I don't remember, and secondly because the Grand Bazaar is a maze and directions are a bit useless. The easiest way is probably to ask about the way from one of the many guards patrolling the bazaar. But the entrance is located in the north-western part. The street where Bond is driving down before driving into Büyuk Valide Han can be found where you expect it to be, right in front of the entrance, so no editing here. 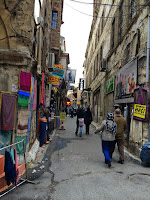