In  the pre-title sequence of You only live twice 1967, Bond, working on a case in Hong Kong is suddenly "killed" in bed by two gunmen. The first scene after the main title is an establishing shot over Hong Kong. The camera pans over Hong Kong Island and the Victoria Harbour, where Bond is buried from a British warship, the HMS Tenby. 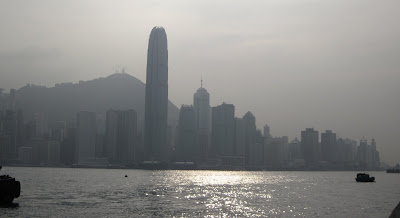 It is not an understatement to say that Hong Kong has changed for the past 45 years. The biggest change of course being that Hong Kong no longer is a Crown Colony under British rule. The lack of space has also caused demand for denser constructions and that is why Hong Kong today has the famous skyline that was not apparent in 1967. I think it is rather safe to say that not a single house can be identified from the film. It is only the mountain that gives away the location. The backlight in the picture above does not make the magnificent view justice, but the viewpoint can be found when walking along the avenue of stars in the Tsim Tsa Tsui district in Kowloon.

The British warships lie just off the pier on the Kowloon side. It is not clear, whether one of the ships visible in the first shot is suppose to be the one where Bond is buried from, even though it would seem natural since an enemy agent can watch the funeral from land. 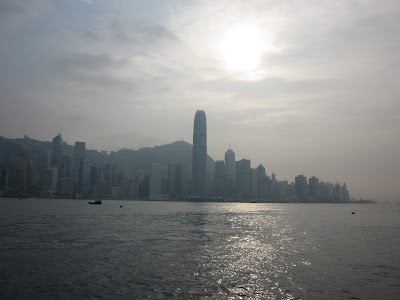 "We therefore commit his body to the deep"

An enemy agent watches the funeral from the Hong Kong Yacht Club, with a newspaper about James Bond's death on the table. However, the funeral itself was not at all filmed in Hong Kong. It was filmed on the British warship HMS Tenby off the coast of Gibraltar. It is apparent that this is not Hong Kong when you see the open seas in the last picture. The real location for the funeral is impossible to determine.

The next post in the travel section will cover British Caledonian airways (BCal), which was Bond's choice of airline in Never say never again 1983. Bond traveled from Nassau to Côte d'azur and landed at Nice airport with a McDonnell Douglas DC-10 from British Caledonian. This was a private, independent British airline that operated between 1970 and 1988. It was formed in 1970 when the Scottish airline, Caledonian Airways took over British United Airways (BUA), the largest independent airline at the time. The takeover eventually turned British Caledonian into Britain's foremost independent international scheduled airline.
British Caledonian airways fits well together with the Bond character. Their commercial strategy was to promote themselves with their stewardesses, known as the "Caledonian girls", as the cutest girls in the world. When you chose Caledonian, you chose the Caledonian girls. No wonder why Bond wanted to fly Caledonian! One can imagine that it would have attracted Connery and helped to persuade him into returning to the role of 007, 12 years after his last Bond film Diamonds are forever. The airline receives a thank you at the end credits but is never mentioned, and has never been seen in another Bond film.

Sadly, a number of setbacks during the 70's and 80's led to financial difficulties and in December 1987 British Caledonian was taken over by British Airways. They ceased operations in 1988.


British Caledonian was the first British airline to introduce the DC-10 and had one of the largest DC-10 fleets in Europe. It was introduced with BCal in March 1977 and operated until they ceased operations in 1988. 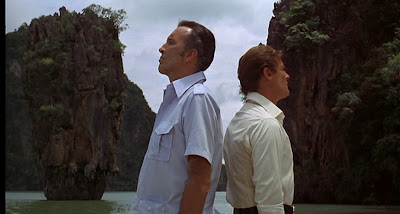 Probably the most famous Bond location in the world is the island of Ko Tapu, or nail island in Thailand, today known as "James Bond island".
Because of the fame, it is also one of the most commercially ruined locations you can visit. But nonetheless, when in Thailand it is well worth a visit. The island is situated in a beautiful part of Thailand, namely Phang Nga bay. It was here that Scaramanga's secret lair was located in The man with the golden gun and the famous duel between Scaramanga and Bond took place on the beach here in 1974.

Since 1981 the island is part of the Ao Phang Nga National Park and since 1998 it is forbidden for tourist boats to approach Ko Tapu, which aims to stop erosion of the limestone rocks that might eventually result in a collapse. Despite that, the beach is not protected and therefore ruined by both the locals and the tourists. 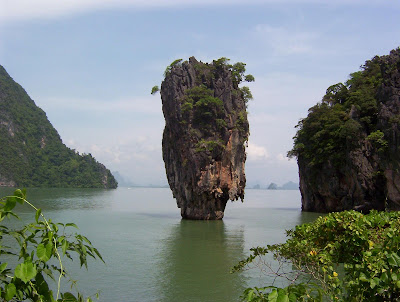 Scaramanga has built a luxurious hideout inside the mountain and has a view over the "mushroom shaped rock". When Bond arrives, he lands on the water and stops his sea plane on the beach. Nick Nack greets him  with a bottle of Dom Perignon 1964, which Scaramanga then opens by shooting off the cork. 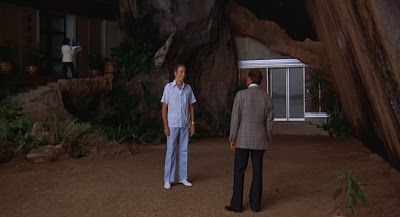 From the beach Bond and Scaramanga reach the entrance to the lair. Of course it is a fake as you can see from the left picture. Another example of excellent production and set design. Obviously all the interior scenes were shot in studio. The cast have left their autographs on some metal plates that can be found on the rock wall.

The original beach is covered with stalls and vendors selling sea shells with the 007 logo and other trinkets, so sadly the original untouched setting is gone forever. But the beach where Scaramanga and Miss Anders are served drinks by Nick Nack, seen in the pre-title sequence, are not the same as the one used in the duel scene. Instead you can find that beach on the other side of the big rock to the right. Fortunately this beach is not as well known and therefore free from both tourists and vendors. 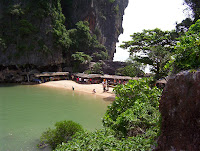 The easiest way to get to James Bond island is probably taking a daylong sightseeing trip where the visit is included together with lunch, elephant trek, speedboat trip and various visits etc. You can almost certainly find at least one tour including James Bond island at every travel agent in Phuket. But the best way to get there would be charter a boat by yourself and leave early in the morning to avoid the tourists and the people selling kitsch. That is probably the only way you can truly enjoy this classic location in peace.

Phang Nga Bay was also used in the final scenes of Tomorrow never dies, 23 years later. The famous "James Bond Island" is not visible however but the surrounding rocks and beautiful scenery is very recognizable indeed. In Tomorrow the location is supposed to be in the south China sea, namely Ha Long bay.