In Casino Royale, Bond arrives in Nassau, the Bahamas, in a small seaplane. He gets off at Paradise Island and the iconic Hotel Atlantis is seen in the background. Bond is on his way to the One & Only Ocean Club to track down Mr Dimitrios. 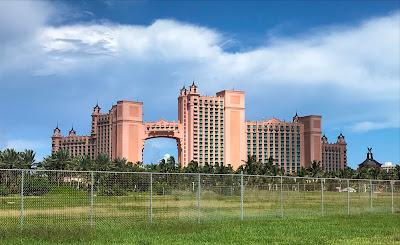 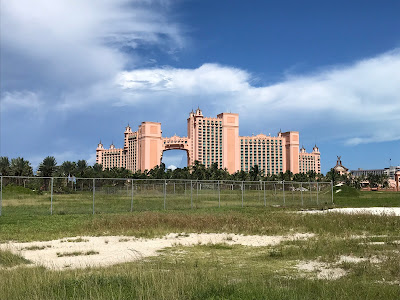 The small airport with a seaplane facility that once was located on Paradise Island is gone today and not a trace remains. But the airport was there at the time of filming in 2006 and the field is still accessible today.

Bond's seaplane lands in the canal in Nassau Harbour, between Paradise Island and Nassau. The opening shot pictures the British Colonial Hilton hotel by the beach as the seaplane flies over.

The scenes from Casino Royale were filmed in 2006. The airport in Paradise Island mainly operated one airline at the time, namely Chalk's Ocean Airways. Not much information about the airport is available, but Chalk's suspended operations in 2007 after a crash in 2005 and one can imagine that the sea-plane facility stopped being used regularly when Chalk's Ocean Airways ceased operations. 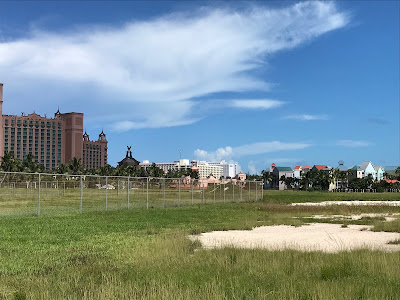 Chalk's was one the most legendary commuter airlines in America, it billed itself as "The World's Oldest Airline". Chalk's flew seaplanes in south Florida and the Bahamas for over 8 decades. The airfield actually played a small part in the Pierce Brosnan movie After the Sunset with Salma Hayek. As her character Lola is about to leave Max (Pierce Brosnan) and take the sea plane from the Bahamas, Brosnan stops her from getting on the plane and asks her to marry him. The seaplane is from Chalk's.
Upplagd av R. Sterling kl. 23:47 No comments: