In Casino Royale Bond is enjoying his retirement together with Vesper. They have bought a boat and presumably sailed from Montenegro to Venice where they have made their first stop. They have checked in to a hotel conveniently located in the very heart of Venice with their hotel suite overlooking the St. Mark's Square. Vesper who has arranged a meeting with Mr Gettler is leaving the hotel and Bond is following her down to the lobby. She tells Bond that she is going to the bank, but in reality she is going to hand Bond's poker winnings over to Gettler. As she leaves the hotel, she knows she is going to her death. 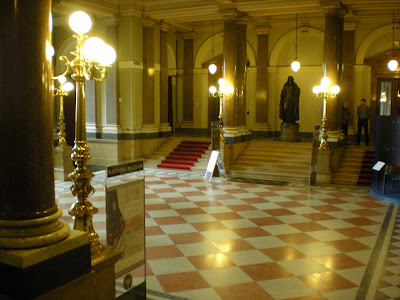 The hotel lobby scenes were filmed at the Czech National Museum in Prague. The entrance hall of the museum was transformed to a hotel lobby but because of the beautiful interior, not much was needed to be done in terms of production design. A front desk and a red carpet were put in, and the right feeling was created with a lot of extras making it look like a busy hotel.

A wall and a fictional elevator was put in where there in fact is a hallway and Bond is escorting Vesper down to the hotel lobby from here. The entrance hall is just down to the left of the pillars. 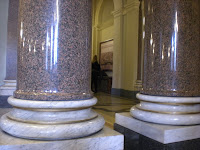 "-Mr Mendel, I'm having trouble accessing the funds in my account.
-It was wired to the account number your company gave us Mr Bond. It appears the funds are withdrawn as we speak!"
-Bond to Mr Mendel-

The main stairway hall can also be found in the museum, just after the lobby. I this scene a member of the "hotel staff" is walking past Bond with some dry cleaning. Even the stairway hall didn't need much of redecorating for the short scene.
The main stairway hall is beautiful and makes the museum well worth a visit when in Prague. However, the national museum is currently under construction and the entire building is closed until further notice. The access has been cut off not only to the main stairway but also to the entrance hall. 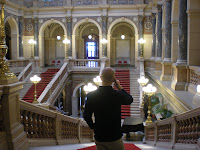 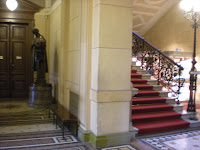 The first stairs Bond is running down can be found just above the main stairway hall. During Mr Stock's and my visit everything was still exactly like in the film. Hopefully, nothing will be changed during the extensive renovation. 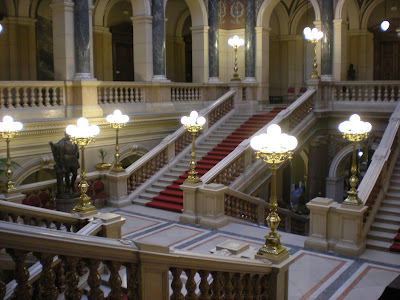 Prague is one of the most beautiful capitols in Europe and the city's historic centre is a World Heritage site. The neoclassical Czech National Museum is one of many grandiose buildings that can be found throughout the city. It is located at one end of Wenceslas Square in the New Town (Nové Město) of Prague. 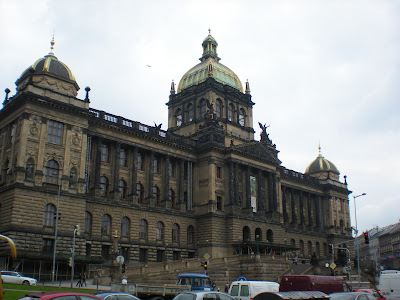