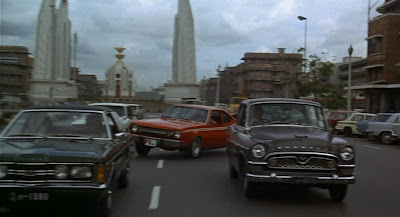 Probably two of the least important locations in the world, from a Bond perspective, can be found in Bangkok. They featured only for a few seconds in the background during the car chase in The man with the golden gun and is interesting only from a documentary point of view. I am talking about the "Democracy monument" and the "Gigant Swing", both located in the heart of Bangkok.

Bond is chasing Scaramanga in a red AMC Hornet, previously stolen from a car show room, with the Louisiana state sheriff J.W. Pepper in the other seat. Scaramanga is driving a golden AMC with agent Mary Goodnight locked in the boot. A few different Bangkok sights can probably be recognized in the film but a lot of things have changed since 1974 so it is hard to find locations still untouched. 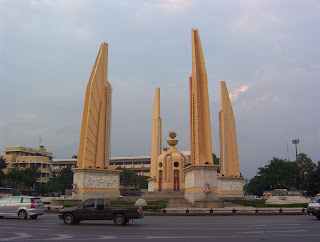 The democracy monument was commissioned in 1939 to honor the "Siamese Revolution of 1932" which led to the establishment of a constitutional monarchy in the Kingdom of Siam. In June 1939 the name Siam was changed to Thailand. (Bond's only other connection with Siam was that he unintentionally drank Siamese vodka in You only live twice 1967.) 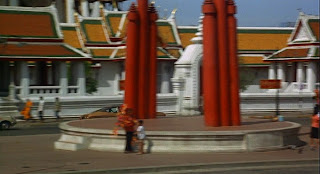 Another monument briefly seen during the car chase is the "Gigant Swing" in front of Wat Suthat temple. The swing can only be recognized by the lowest part and is never seen in its full heigth in the movie. The Wat Suthat temple in the background is more obvious and they probably chose to film the sequence here because it was a distinct Thai location. 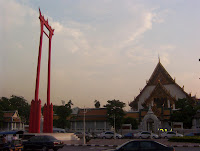 The Gigant Swing was originally constructed in 1784 and is a religious structure used in various ceremonies. It was renovated and moved to its current location in 1920 and a major reconstruction took place between 2005 and 2007. I visited both of these locations in 2005 unaware of their significance to the Bond history, something that I discovered years later.

The car chase is one of the least interesting chases in the entire Bond series and is probably remembered only for the finale when Bond jumps with the car over a river and flips it 360 degrees. A stunt that became world famous after the Bond film.

The film itself qualifies in the bottom five list despite Christofer Lee and the fact that there are two Swedish ladies in the lead. The plot is poorly written and Scaramanga is no actual threat to Bond or anyone else. The film has little action and takes almost no advantage of the exotic locations in Hong Kong and Macao. That said, it is one of Sir Roger's better efforts as Bond, before he became to tired of doing his own fight sequences. It is also the film where Bond has the most number of suits in the series.

Email ThisBlogThis!Share to TwitterShare to FacebookShare to Pinterest
Etiketter: Thailand, The Man With the Golden Gun