BOAC - Keeping the British end up

"James Bond, his stomach queasy from the BOAC version of an English country house breakfast. It was just 10 a.m. on a blue and golden late September morning and the BOAC Monarch Flight 505 from London had landed at Idlewild...'' -Ian Fleming- in 'James Bond in New York' 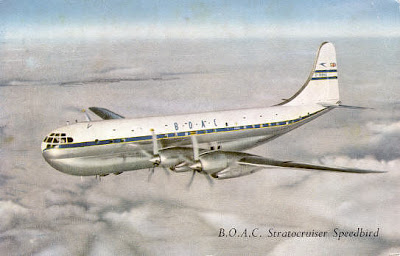 The British airline BOAC (British Overseas Airways Cooperation) has played a relatively small part in the Bond films despite the fact that it was a British state airline, and perhaps even a cultural icon that stood at its height in the 50's and 60's. It was also Fleming's airline of choice for Bond in a few of the novels, including the short story 'James Bond in New York'. Fleming also mentioned BOAC in e.g. 'Goldfinger' and Bond is flying to the United States in the novel 'Diamonds are Forever' on a BOAC Stratocruiser.

"Breakfast came, that inappropriate assortment of foods that BOAC advertise as ‘An English country house breakfast’ [...] Cheerful start to flying the Atlantic, reflected Bond, and then they were all walking across the tarmac and up into the big Boeing and, with a burst of oil and metanol smoke, the engines fired one by one. The chief steward announced over the loudspeaker that the next stop would be Shannon, where they would dine, and that the flying time would be one hour and fifty minutes, and the great double-decker Stratocruiser rolled slowly out to the East-West runway."
-Ian Fleming- in 'Diamonds are forever' 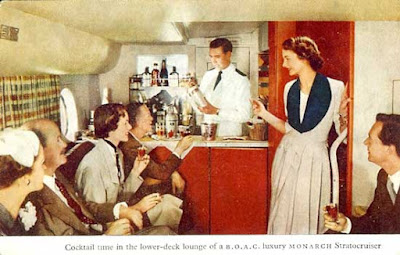 It would also have been the natural choice for Bond traveling to British colonies like Jamaica or the Bahamas in the early films. Their luxury 'Monarch service' that Fleming wrote about in 'James Bond in New York' was introduced by BOAC in 1951 and offered sleeper accommodation across the Atlantic. This service was introduced  for example between London and NY in their Boeing Stratocruiser. However, the Stratocruiser had been retired from passenger service already in 1959 and with the arrival of the new 'jet age', the Boeing 707 was the obvious choice for Bond when flying to Jamaica in Dr No.

Dr. No
But even though Pan Am was the airline of Bond's choice in Dr. NO, the BOAC logo featured in the film. Bond is offering his taxi to two stewardesses from BOAC and the name can also be seen in the terminal. Could this be a nod to some of the old Fleming novels? The man taking Bond's bags to Mr Jones' car has a BWIA (British West Indian Airways) overall, which also was a subsidiary of BOAC at the time.

From Russia With Love
Again, BOAC is visible in From Russia with love, but this time in Istanbul at Bond's hotel. A desk stand with the BOAC logo, holding some folders, is briefly seen at the reception desk. Under the logo you can read the advertising slogan "World leader in air travel" (only visible in Blu-ray). 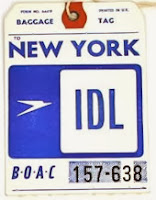 BOAC was also the airline of choice for Major Derval and his "social secretary" Fiona Volpe in Thunderball. Bags with luggage tags from BOAC are visible in their hotel room when Count Lippe is taking the watch from the dead Major Derval. The picture to the left is an example of a BOAC luggage tag from the same time so there can be no doubt about the tags in film. The letters LON can be seen next to the speedbird logo and LONDON can be read above. Since Derval is a NATO officer, it is likely that he and Fiona Volpe have been flying in with BOAC to London from the United States. The luggage tags would have been from British European Airways if they would have come from a city in Europe, like Paris or Rome for instance, so it is certain that they have arrived on an intercontinental flight.

The Spy Who Loved Me
After that rather quick appearance in Thunderball it would take another 12 years until the name would be seen again. For some reason Q is carrying a cabin bag from BOAC when he meets with Bond in Sardinia in The spy who loved me, 1977. By this time BOAC hade merged with BEA (British European Airways) and formed a new airline, today's British Airways. (In the novel 'Dr No' Bond is traveling with BEA to Jamaica.)

Since the merger took place already in 1974 and BOAC had ceased operations, Q's bag is not a product placement. Does anyone know why that bag was used?

The earlier films was not as meticulously planned when it comes to accessories and props as it is today, so I suppose it is possible that the bag was something that they just got hold of during filming. Either way this is the last time, to my knowledge, that BOAC is visible in the series. But already in Moonraker, an advertising billboard with British Airways would be seen (covered in the earlier post).

BOAC was the first airline to carry the Queen, when she came back to England from East Africa, following the death of her father, King George VI in 1952. A few months earlier, in 1951, the first royal flight by BOAC took place when they transported the then Princess Elizabeth and the Duke of Edinburgh to Montreal in a Stratocruiser. A Royal airline, fitting for Bond...

In loving memory of Marvin Hamlish who passed away on Monday 6 August 2012.
Nobody does it better.
Upplagd av R. Sterling kl. 23:35

Email ThisBlogThis!Share to TwitterShare to FacebookShare to Pinterest
Etiketter: airlines, BOAC, British Airways, Diamonds are Forever, Dr No, From Russia with love, The Spy Who Loved Me, Thunderball, Travel section