﻿
"-But what the hell is Lazar?
-Not what, who; a Portuguese, lives in Macau."
Bond to Calthorpe 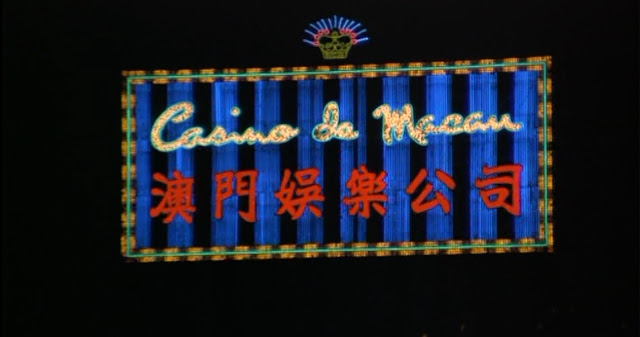 In The man with the golden gun, Bond goes to Macau to find the weapons and munitions manufacturer Lazar who allegedly has manufactured the golden bullets for Scaramanga. Bond is driven to Lazar's gun shop in a cycle rickshaw, but just before he arrives he passes in front of a casino called Casino de Macau. This scene was shot on location just in front of the floating casino called 'Casino Macau Palace', or 'Casino de Macau' which evidently was the name in 1974. Today, the pedal driven taxi is a tourist attraction in Macau and if you want to try one, you will probably pay about five times more than a regular taxi. 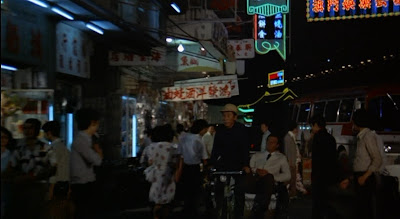 So far this location has been one of the hardest to identify, partly because of the insufficient information about the casino but also because of the very few exterior shots. However, a few old photographs proved to be most helpful and made it possible to determine the location.

In the picture to the left the name on the sign says 'Casino Macau Palace' and if this was the name before or after The man with the golden gun is unknown. But the sign and entrance are the only things from the exterior of the casino that can be recognized from the film, even though the name has been changed. The picture below makes it possible to determine the exact spot where the casino was located, namely along Rua das Lorchas, between Ponte No 12 and 14.

The original casino was moored along the quay in the inner harbor, just opposite the buildings that can be found at 220 Rua das Lorchas today. Bond questions Lazar about by whom the golden bullets will be collected, in order to track down Scaramanga. Lazar claims that he delivers them in the casino, without specifying which casino. It is implied that it is the floating Macau Palace that Lazar is referring to since the sign has already been pictured. 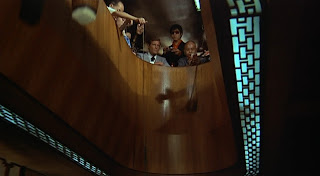 "-Who collects them?
-I swear I do not know! My instructions are to go to the casino and deliver them, get paid and then vanish."
-Bond questions Lazar-


Only a few scenes from the interior of the casino is seen in the film. In his book: 'My word is my Bond', Sir Roger writes about the casino where you place your bet through an opening in the roof, which indicate that these scenes were filmed on location in Macau. But since the real casino is gone it is impossible to determine where. 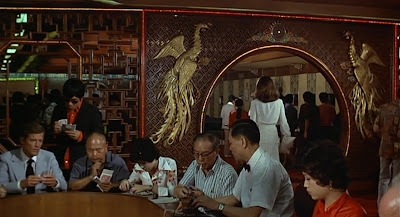 Up until some years ago, Macau still had a floating casino with the same name as the original; Casino Macau Palace. Although the building was new (or at least renovated), as seen in the picture below, the casino was located in the same place as the original. But it also had another location, namely in an area called Fisherman's Wharf, very close to the ferry terminal, where it probably was located up until its retirement. I have not been able to determine for how long the casino was located there, but today the floating 'Macau Palace' is anchored in the inner harbor, in the north western part of the Macau peninsula and it looks like it has been out of business for quite some time. 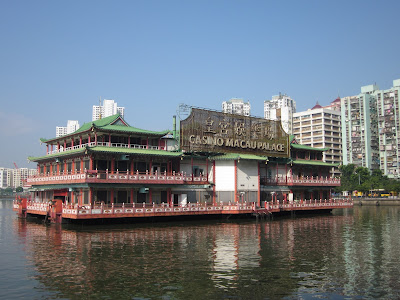 "I hate to interrupt your dinner but does señor Lazar live here? Lazaaar..?!"
-Bond to a Chinese family- 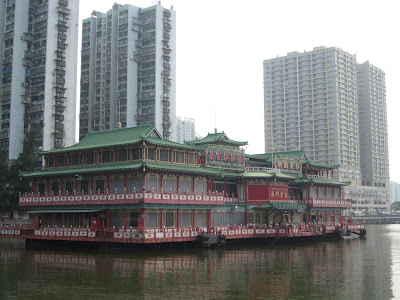 This is the old location of 'Macau Palace Casino' where it was located up until a few years ago, before it was towed away to its present "resting place" in the inner harbor. If the casino currently is being renovated and awaits a reopening is not clear, but the activity during my visit last year was very low. One can only hope that it will be reopened and moved to its original location.


One of the many references to the past Bond films that can be found in Skyfall is the fact that Bond again ends up at a floating casino in Macau. The "Floating dragon" casino seen in Skyfall is a fictitious casino that was created in studio for the film, but I think it is obvious that the inspiration for the building comes from the original 'Macau Palace Casino'.

Email ThisBlogThis!Share to TwitterShare to FacebookShare to Pinterest
Etiketter: Macau S.A.R., Skyfall, The Man With the Golden Gun
Plats: Macao