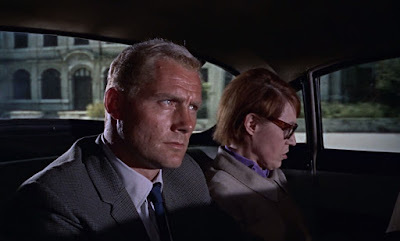 After picking up Donald Grant outside the Russian Consulate Klebb and Grant drive off in a taxi. During the ride through Istanbul one particular building is briefly visible. The same building does not feature anymore in the film but a few photos show that both Connery and Armendariz actually visited this location when filming one of the scenes that were deleted from the finished film, which were shot nearby this location. The building turns out to be one of Istanbul's many mosques. 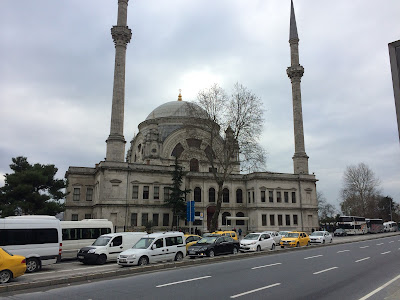 The mosque visible behind Grant and Klebb in the taxi is the Dolmabahçe Mosque, located just by the Bosporus along the road 'Meclis-i Mebusan Caddesi'. The mosque can be found in the Beşiktaş district, approximately 15 minutes by taxi from the Galata bridge. Immediately after passing the mosque, the taxi with Grant and Klebb takes off to the left on what appears to be the street 'İnebolu Sokak'.


However, it would probably not be worth the trouble to find this location if it wasn't for the picture below, namely the photograph with Sean Connery, taken during filming. In this picture Connery is standing on the street 'Dolmabahçe Gazhane Caddesi' with the mosque visible in the background. The reason for Connery's visit to this location was for the shooting of a scene that, sadly, was deleted from the finished film. 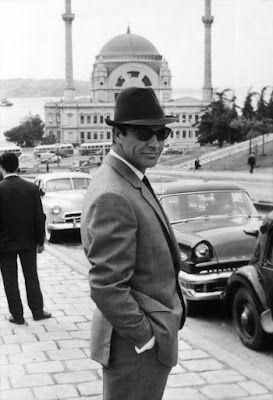 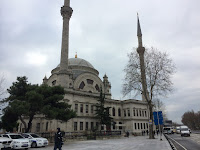 The mosque is located right next to the Dolmabahçe Palace, which was the main administrative center of the Ottoman Empire from 1856 to 1922, and which certainly is a much more visited tourist attraction in Istanbul than the Dolmabahçe mosque. The easiest way to get here is probably to take a taxi to the Dolmabahçe Palace, but it is also possible to take one of the Bosporus ferries to the Kabataş station. From there it is just a short walk to the south. 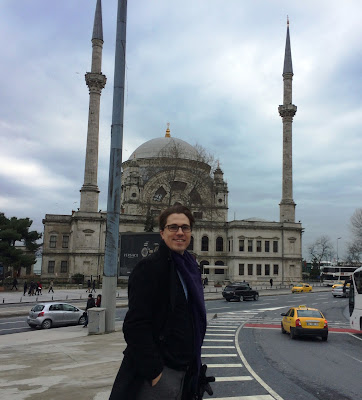 The deleted scene that was shot here on location features Bond, Kerim and the Bulgar who is tailing Bond earlier in the film. Apparently, Bond is on his way to meet with Romanova and is trying to loose the mysterious Bulgarian pursuer. Bond hops into a taxi and takes control of the taxi's brakes, causing the Bulgar to run into the back of the taxi. A third car joins the pile-up and the driver of the third car turns out to be Kerim. As Bond makes good his escape in the Rolls Royce, Kerim simply says to the Bulgar: "My friend, this is life". This was supposedly a brilliant scene that Terence Young shot several times in order to get the long ash on Kerim's cigarette that Pedro Armendáriz insisted on. However, during a screening it was discovered that the Bulgar in this scene had actually been killed by Grant in the St Sophia earlier. Therefore, this scene was cut and to my knowledge only a few stills survived, such as the picture below. The fact that the Bulgar's Citroën appears to have crashed into Kerim's Ford in front of it, contradicts the story that Bond was in a taxi. 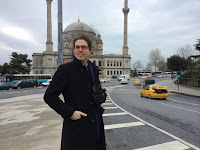