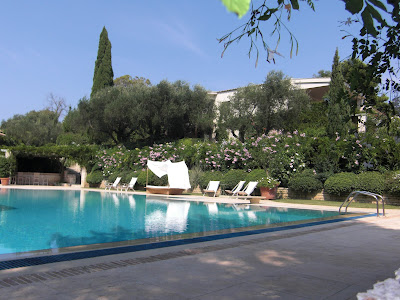 In For your eyes only the cast and crew traveled to Corfu, the Greek island close to Albania in the northwest of Greece. Several sites in Corfu doubled for locations in both Spain and Albania. The appropriate follow up to Danila village is the villa where Bond tries to find the Cuban hit man who killed the Havelocks. Bond tracks down Hector Gonzales "outside Madrid".

This scen was actually filmed at Villa Sylva in the east of Corfu close to Kanoni. Up the hill from Mouse island you pass Corfu Palace Hotel, where the casino is found today, and immediately past the hotel on your right there is a metal fence with a name plate in stone: Villa Sylva. Well hidden behind bushes and trees lies the 5 acres private residence that was used as the hideout for Gonzales where Melina later gets her revenge. 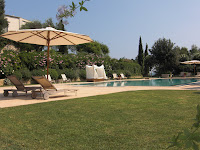 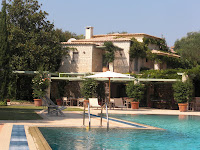 The villa is private and not accesible for the public, which makes it one of the most hard to visit Bond locations. If you do want a glimpse of this classic pool area you have to infiltrate it just like Bond. The best way is from the south side, the same way Moore took in the film. If you park your car at the Hotel parking lot you can gain access to a small road surrounding the villa through some bushes and over a small ditch. The guard that keeps an eye out for unwanted visitors in the film is actually guarding this road. From here you can take the steps up to the pool area or climb the 4 m high wall and take a look into the garden. Fortunately there are no armed guards in the bushes anymore. 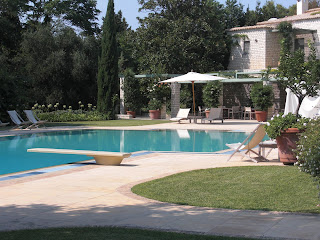 The pool has been remade and the springboard has been moved to the opposite side of the pool so it´s no longer possible to put an arrow in someone's back. Also a big pool house has been built since 1981. But despite the changes the pool still has salt water and the fact that you have to use the same way as Bond to get into the garden makes it even more interesting. 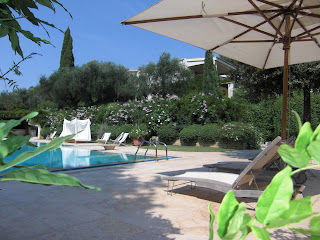 In the garden you can find lime trees and on the sea side of the property there are steps that leads all the way down to the private beach area. This is a classic location that also is avaliable for rent. Prices between $24,500/week during low season and $45,000/week during high season.
Upplagd av R. Sterling kl. 16:07