It appears we share the same passions...
Few places are so associated with James Bond as Monaco and Casino de Monte Carlo. Although it was not until 1983 and the unofficial Bond film with Connery, Never say never again that Bond went to Monaco for the first time. The principality would later play a part in the beginning of Goldeneye, when Brosnan wore his black tie for the first time. This post will focus on GoldenEye and leave the Connery locations for another time. 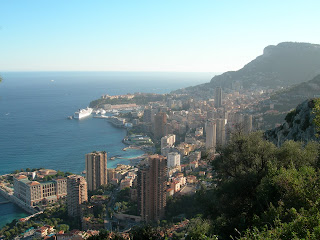 One of the best view points you will probably find at the Vista Palace Hotel on the Route de la Turbie/Avenue Agerbol. The road is very busy and it's not possible to stop at the real view point, but park your car and enjoy one of the most beautiful views in the world. The car chase between Bond and Xenia actually took place on the roads above Nice in les Alpes Maritimes and Brosnan is not actually stopping at this view point in the film.

My favourite location in the world, and definitely one of the most luxurious places on earth. This legendary casino opened in 1863 and since then it has been a symbol of luxury and elegance. Bond meets Xenia for a game of Baccarat in the salon privée, even though that scene was shon in studio. But the scene where Brosnan is walking thru the casino was shot on location. Unfortunately, photography is prohibited inside the casino.

A drink in the Bar Americain at Hotel de Paris is definitely recommended. You can't find a bar with better service and the Hotel is truly one of the best in the world. You also avoid the tourists at Café de Paris, opposite the hotel. If you want to spend money on dinner, the restaurant Le Louis XV has 3 stars in the Michelin guide and a wine cellar with 400 000 bottles. If you're lucky enough to get a table at the veranda you can enjoy the amazing view and watch Aston Martins, Rolls Royce and Ferraris pass the Casino all night. This is also the hotel that Danny Wilde and Lord Brett Sinclair checked in at in the first episode of The Persuaders from the 70's, starring Sir Roger Moore and Tony Curtis. 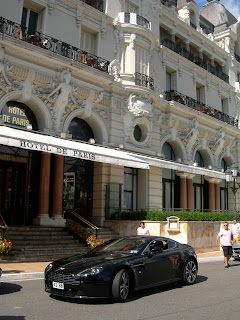 The casino is located on Place du Casino and when driving to Monte Carlo you should arrive from the Grand Corniche on to the Boulevard du Jardin Exotique. After driving on the Boulevard Princesse Charlotte and on to Avenue Saint Michel you should turn right, down to the Casino in order to arrive the same way as Brosnan. Unfortunately, the valet parking isn't for everyone so don't be disappointed if Pierre is not there to take your car... 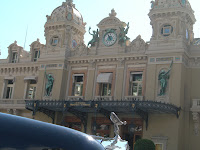 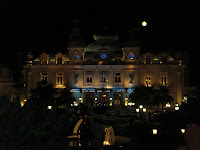