After a night on the train to Montenegro, Bond and Vesper arrive at the train station and picked up by a limousine from the Hotel Splendide. Most of the Montenegro scenes were filmed in and around the spa town of Karlovy Vary, in the Czech Republic. 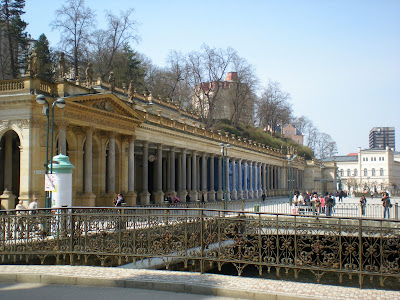 One of the most beautiful buildings in the city is the Mill Colonnade. This is not a train station at all but instead it houses five of the town's hot springs that made Karlovy Vary famous. For centuries people have been coming to Karlovy for the medicinal salt, many spa resorts and the healing power of thermal spring water. 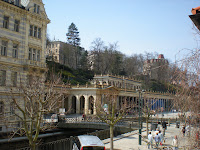 The Mill Colonnade is situated in the centre of the town and is only a few minutes away from both 'the Hotel Splendide' and 'Casino Royale'. Built between 1871 and 1881 it was designed by Josef Zítek, who also designed the national theater in Prague. It was originally intended to be a two storey building but lack of funds restricted it to one. Five of Karlovy's 13 most famous hot springs can be found inside the Colonnade. Each source emits water at a temperature between 53-65 degrees Celsius. Horse carriages, like the one seen on the bridge in the film, can still be found all around town. 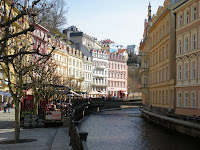 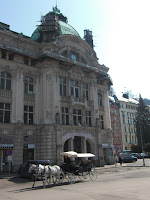 -Do government agents pay tax?
-It's unfair, isn't it..

One scene, where Bond and Vesper are seen arriving at the train station, was cut from the finished film. This was filmed inside the colonnade, where you get the feeling of a busy train station. They have a short conversation about government funds when walking to the limousine. The deleted scene is available on Blu-ray and the extended DVD. 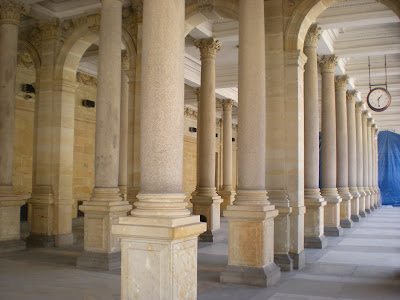