No head for heights - The old fortress, Corfu part 3

Loque finally meets the end after Bond has chased him from the "Albanian warehouse". Bond comes out from a stone gate and takes a well-aimed shot at Loque's shoulder. The car crashes against a stone wall and stops just before going over. Bond avenges Ferrara by throwing in Loque's dove pin and kicks the car over the cliff. 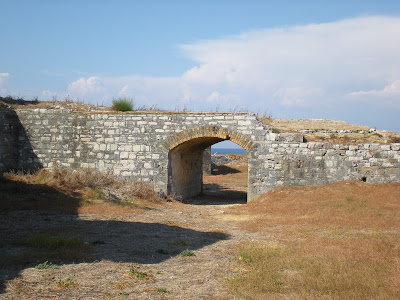 This scene was filmed at the very eastern part of the old fortress in Corfu, covered earlier in part 1 and part 2. The area is closed nowadays due to the bad condition so you have to climb a fence to gain entry. But when you get there it is well worth your trouble. This is definitely one of the best Bond locations in Corfu and since the area is off limits for tourists, you are there all by yourself. This is truly a beautiful location with a view over both the Greek mainland and Albania.

You left this with Ferrara I believe... 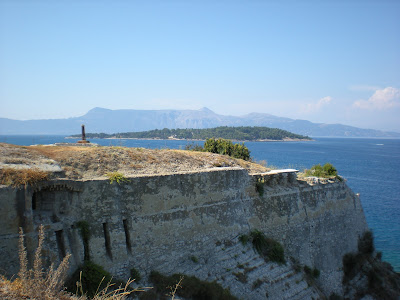 Sir Roger was reluctant to shoot the scene where he kicks the car over the cliff since he thought it wasn't something that his Bond would do. He thought it would be enough to toss the pin in the car and that the extra weight would make it fall over. But the director John Glen insisted on having Bond kick the car over and it would prove to be one of the strongest scenes in the film. The scene would be important because it was necessary to bring Bond back to earth after the comedy-like Moonraker. 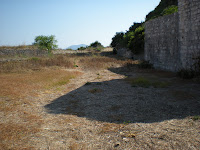 Loque's Mercedes is coming at high speed and Moore takes aim. This area is not connected with the tunnels and steps that was used previously in the chase. The Mercedes is coming from a dead end from this angle and the cliff where Bond kicks the car over is actually behind the stone gate. Another example of excellent cutting by the filmmakers. Neither me or my friend could figure out how they even got the Mercedes up there. 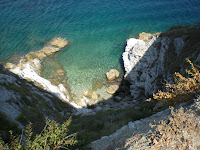 For your eyes only remains one of the best films in the series and is definitely in the top five list. Sir Roger is very good in the film, it has beautiful locations and the classic spy story has influences from the cold war. Bill Conti composed a good soundtrack and the title song, established as a timeless classic, is probably the best song in the series.
Upplagd av R. Sterling kl. 23:48

Email ThisBlogThis!Share to TwitterShare to FacebookShare to Pinterest
Etiketter: Corfu - Greece, For Your Eyes Only
Plats: Kerkyra, Korfu, Grekland