Property of a lady - Sotheby's auctions

When agent 009 turns up dead in East Germany with a fake Fabergé egg i his hand, Bond is called in to track down the murderer. The real egg is being auctioned at Sotheby's that afternoon and Bond is keeping an eye out for the seller at the auction, trying to find some leads. After a bidding race against Kamal Kahn, Bond bumps up the price to £500.000 and forces Kamal to buy. The action, and brilliant music by John Barry continues outside of Sotheby's. The auction house is suitably located at New Bond street, no. 34-35. 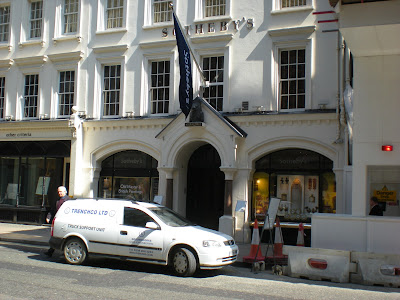 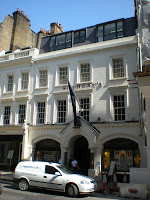 Since this is England, you can rest assured that not much has been changed since the film was shot here almost 30 years ago. The main thing different of course being that the entrance has moved to the center of the building, with two big windows on either side. 'The Bond street kiosk' where 007 picks up a magazine has also disappeared. Most likely that was put up for the film, but a magazine shop with the same name can be found at the Bond Street underground station just a few minutes away.

Being a fashionable shopping street ever since the 18th century, Bond street is evidently one of the most expensive strips of real estate in the world.

Bond gives a signal to Smithers who tails Kamal to Heathrow in a London taxi. In the background the Polo Ralph Lauren shop is visible. You can still find the shop in the same building today, surrounded by other luxury shops along the street. Kamal is driven to Heathrow in a Mercedes Benz 600 Pullman, the car of choice for a true villain. Even though Kamal rides in the Pullman version, the Mercedes Benz 600 has been used by Blofeld in both Diamonds are forever and On Her Majesty's secret service. 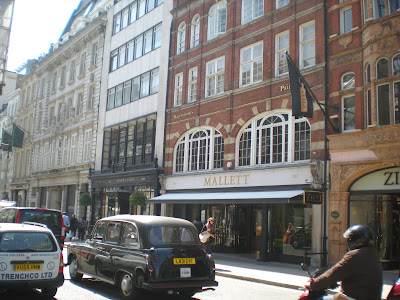 Just below Sotheby's, to the left on Bond street, you can find Conduit street. This was the location where the famous Bond tailors Anthony Sinclair and Cyril Caslte, who made the suits for Sean Connery and Sir Roger respectively, had their shops. When walking down on Bond street, you should turn left in to Burlington gardens and take a walk down Burlington Arcade where you can find the vintage Rolex store at 'The Vintage Watch Company'. They have an unparalleled collection of vintage Rolex watches if you want to do some window shopping for a 1962 James Bond Rolex Submariner.