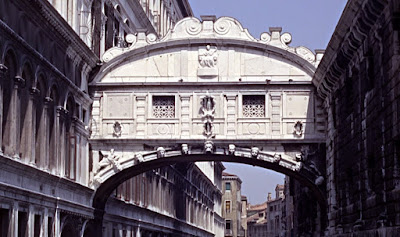 For the final scenes in From Russia With Love, Bond and Tania are traveling down a canal in Venice after disposing of Colonel Klebb in their hotel room. They are riding in a taxi boat on the canal Rio di Palazzo and pass under one of the most famous bridges in Venice - the Bridge of Sights.

Bond and Tania are travelling down the canal in a taxi boat, not in the traditional gondola, since they are leaving town, probably heading for the airport. As they continue down Rio di Palazzo they go under another bridge from where they are being filmed by two tourists. From this bridge you have a nice view over the Bridge of Sighs.


The Bridge of Sighs connects the New Prison (Prigioni Nuove) to the interrogation rooms in the Palazzo Ducale (the Doge's Palace). It was built between 1600 and 1603 and was designed by Antonio Contino (whose uncle Antonio da Ponte had designed the Rialto Bridge in Veince). 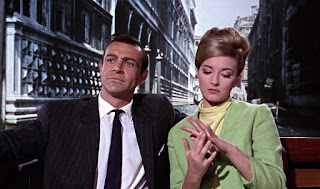 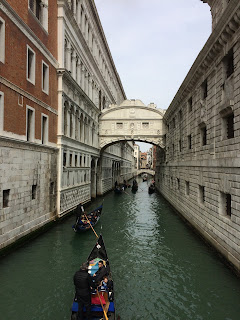 The view from the bridge was the last view of Venice that convicts saw before their imprisonment, when taken from the Doge's palace to the prison across the canal. The bridge name, given by Lord Byron as a translation from the Italian "Ponte dei sospiri" in the 19th century, comes from the suggestion that prisoners would sigh at their final view of the beautiful lagoon before being taken down to their cells.


Despite several scenes being filmed on location in Venice for the film's finale, none of the principal cast were there during filming as their scenes were shot in studio.
Upplagd av R. Sterling kl. 13:49