As filming of SkyFall is well underway in the United Kingdom and Turkey it is appropriate to look at one of the locations that will appear in the new film. Earlier this year, Dame Judi Dench were shooting on location at Vauxhall bridge, just outside the iconic building of Mi6 headquarters. The building has featured in some of the previous films during the Brosnan era and will now make a long awaited reappearance.

Starting with GoldenEye, Bond's office has been housed in the real Mi6 building at Vauxhall Cross in London. 1995 was the first time the building was seen in the series. The previous film Licence to kill had featured the exterior of the old war office building in Whitehall as M's office.

In Tomorrow never dies 1997 Bond meets with M at the Ministry of Defence instead of Mi6, hence the exterior was never seen. The establishing shot of the Ministry was filmed at Somerset house (doubling for the Ministry) and Bond later gets his assignment as he travels around London in M's Daimler. But the Mi6 location would make a comeback two years later in Brosnan's third outing.


The world is not enough

In The world is not enough 1999 Mi6 played the biggest part to date, when it comes under attack in the pre-credit sequence. A suitcase of money that Bond has brought back from Spain explodes and blow a hole in the left wall.

Since the filmmakers were not alloved to blow up the real Mi6 they constructed a model. Another example of the brilliant production design from the Bond series. It is an excellent model almost impossible to distinguish from the real building.


Because of the attack, the entire Mi6 have to move to Scotland while the building is being renovated. Hence, the HQ is set in a Scottish castle for the rest of the film. 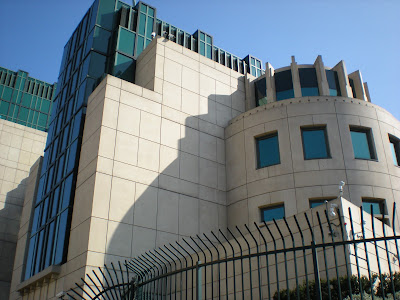 The year 2002 was the last time before Skyfall that the building featured as the exterior of Mi6 Headquarters. It featured twice in Die another day, both in the middle of the film when Bond returns to Q-branch and just before the final scene before Moneypenny is found with the virtual reality glasses at the end.

In the film, Q-branch is located under ground (supposedly an abandoned station), and during Bond's meeting with Q, you can read "Vauxhall Cross" on the wall.

Vauxhall Cross refers to the real location of Mi6 which is located right next to the Vauxhall tube station. The names of the stations seen behind John Cleese, except for Vauxhall Cross, are all located along the blue Piccadilly line (South Kensington absent). Vauxhall Cross is not a station along that line and why these stations were used is unknown. These scenes were  naturally shot in studio.


In both Casino Royale and Quantum of solace Bond never visits M's office. Even though M has a few scenes behind her desk in those two films the exterior is never seen.


After 10 years, the real Mi6 finally returned as Bond's headquarters in SkyFall. M's office is blown up by Silva in the beginning of the film and M has to relocate Mi6 to Churchill's old bunker under ground. In the first scene after the main title sequence, M is writing Bond's obituary in her office.

Later, after her first meeting with Mallory, her car is stopped on Vauxhall bridge just before her office blows up.﻿

The last scene pictures Bond on the roof of a building in Whitehall, namely the Department of Energy and Climate Control, overlooking the Old War Office building, indicating that the new Mi6 HQ again has been moved to Whitehall and will be located here for the next film. The Old War Office was the location of Bond's HQ in both Octopussy, A View to a Kill and Licence to Kill.

In the final scene of Skyfall Mallory has assumed office and a painting of the "old" Mi6 hangs behind his desk. This picture is not present in Spectre.

Read the entire article on the Vauxhall filming and everything else about SkyFall on the website mi6-hq.com, one of the best Bond fan sites to date:
Link to Mi6-hq - The road to Mi6 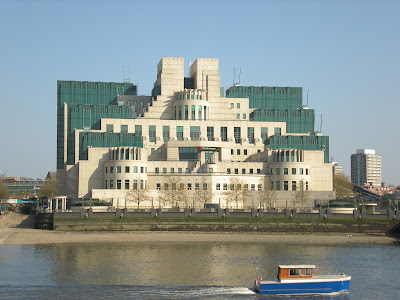 The reconstruction of the Vauxhall building started in 1989 after the property had been bought by the Government and it was finished in April 1994. It was Prime Minister Margret Thatcher who approved the purchase of the building in 1988 due to the need of a modern building that could accommodate new technology and IT connectivity for the Secret Intelligence Service (SIS), also known as the Mi6. The building was officially opened in July 1994 by Her Majesty the Queen.* It was therefore brand new when it featured in GoldenEye for the first time.