When Bond arrives in Corfu he meets Melina at the monastery in Pontikonissi, where she tells him that she has to go shopping for the crew. They walk through Corfu town and some typical Greek sights are pictured. Just outside the city centre lies the old fortress (covered earlier). The building seen in the picture above is the church of St George, built by the British, and is perhaps the most characteristic part of the old fortress. This is the only church in Greece built in the style of an ancient Doric temple. When you walk towards the viewpoint, where you can see the church, you pass the Esplanade. Here you can still watch games of cricket being played, a reminder of the time when the British ruled the island of Corfu.


Bond and Melina also walk past the famous Maitland rotunda. It was built in 1816 in memory of Sir Thomas Maitland, the first British governor of Corfu during the colonial era. 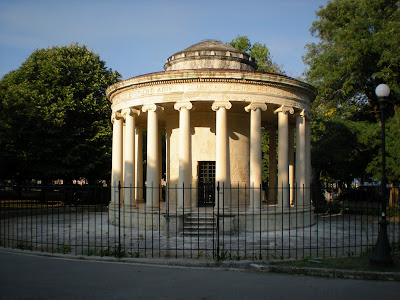 After walking through the town they reach the viewpoint at the Achilleon palace, which is at a completely different part of the island but filmed as though it would be in Corfu town. To sum up, these sights are some of the most beautiful and recognizable parts of Corfu. 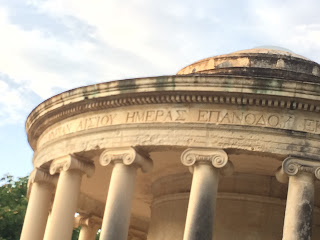