In Casino Royale, Bond tails Alex Dimitrios from Nassau to Miami after kissing off Solange with a bottle of Bollinger Grande Année. Dimitrios is supposed to deliver a bag to a terrorist at The Body worlds exhibition in Miami.

All the Miami scenes were shot in the Czech Republic and the exterior of "Miami Body worlds" can be found in Prague. The building is really the Czech Republic Ministry of transport which was brilliantly converted to a Miami location, complete with palm trees and American cars in front. Unfortunately the building is not lit up in the evenings. The entire building feels like a relic from the cold war and a reminder of the Communist rule in Czechoslovakia. It is amazing how they could make it look like an exhibition center from the sunshine state, and even though it only features for a few seconds it is worth a visit if you are in Prague and on your way to Danube house. 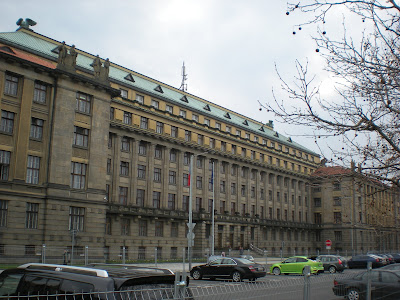 The Ministry of transport -- Ministerstvo Dopravy České Republiky -- can be found on Nábrezí Ludvíka Svobody 1222 Praha 1 - Nové Mësto just off the Vlatava river and only a 10 min walk from Dryden's office aka Danube house, that is seen in the pre-title sequence of Casino Royale. 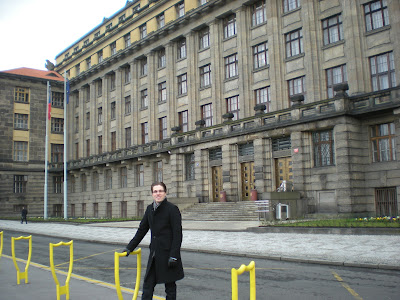 The interior scenes were also shot in Prague but on a different location, namely the National Monument on Vitkov hill. This national monument was built between 1927 and 1932 in honor of the foundation of the former Czechoslovakia and of the Czechoslovak legionaries who served in WWI.

The building was used by the Nazis during WWII as an arsenal and after the war it became a Communist mausoleum. Three of the Communist presidents are buried here and it is also the tomb of the unknown soldier. Today the building houses a museum on Czech twentieth-century history, a communist monument to the fallen of WWII and on top, a café with magnificent view over Prague.

It is hard to recognize the interior but some details can be found in the film. Notice the pattern on the windows. The stairs below can also be seen in the background with people walking up and down in a few scenes. Even the stone floor can be recognized in the film and the metal garland seen next to Craig in the picture above can also be found on this location. Even though the location features for a very short time in the film and the interior is hard to recognize it is well worth a visit. It is a nice walk up to the monument and you almost have a 360 degree view over the city from the café. 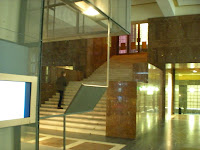 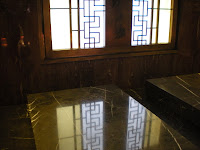 The monument on Vitkov hill can be found on U Památníku 1900, Praha 3. Národní památník na Vítkove. Vitkov hill is conveniently located near both Danube house and the Ministry of transport.
Upplagd av R. Sterling kl. 15:45