In For your eyes only Bond is sent out to track down the Cuban hit man Hector Gonzales, who is hiding in a villa near Madrid. The first scene after Bond has been given the assignment by the Chief of Staff in London, finds Bond in his Lotus Esprit supposedly on a country road in Spain, driving through some olive groves.


Gonzales is at a villa near Madrid, isolate him and apply the necessary pressure to find out who hired him...
- Tanner to Bond -

These scenes were shot, like all the scenes taking place in Spain, on location in Corfu, and the curve can be found just outside the little village of Pagi. On these roads the following Citroën car chase was filmed and even the curve was reused, filmed from the other side. It was in Pagi that Melina flipped the car over when trying to take "the low road". The Citroën CV2 chase and the village will be covered later. Surrounding the narrow roads are thousands of olive trees. 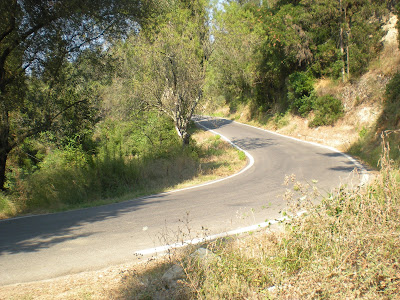 The villagers are seen harvesting olives in the background, a scene that is very accurate considering the location. Corfu has approx. 2 million olive trees and especially in this northern part of the island. This explains the scenes with Bond and Melina driving through the olive grove during the chase and the harvesting villagers here in the opening. Whether you can find just as many olive trees in Spain (especially the Madrid area), I leave unsaid.
Upplagd av R. Sterling kl. 21:00